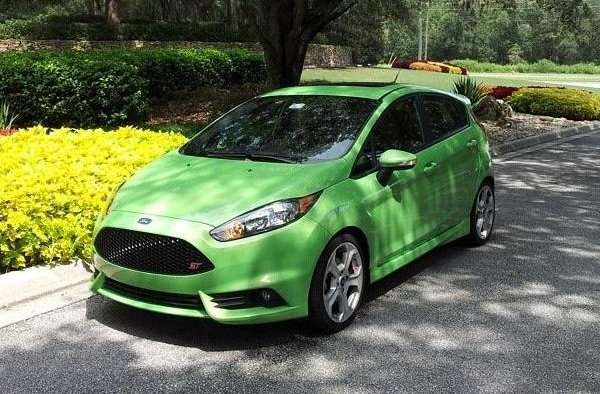 The 2014 Ford Fiesta ST will arrive later this year as the second global performance car based on an “economy car” and as part of the ongoing Fiesta Movement, Fiesta Agent Michael Berenis took his 20914 Fiesta ST to the drag strip and while the ET wasn’t fantastic – the 89 mile per hour trap speed is mighty impressive.
Advertisement

If you are unfamiliar with the Fiesta Movement, it is a program run by Ford Motor Company where they literally hand over a bunch of new 2014 Ford Fiesta ST models to popular social media members with lots of followers and these people – dubbed Fiesta Agents – then use these cars as their daily drivers while also completing various challenges. For Michael Berenis and his 2014 Ford Fiesta ST, the latest challenge was to hit the drag strip and see what this super efficient hot hatch can do in the quarter mile.

Some quick background on Michael Berenis, his 2014 Ford Fiesta ST and the track at which this video was made:
-Berenis has extensive road racing and rally racing experience but this is his first time at the drag strip. He has owned a variety of high performance cars which most recently include a built Mitsubishi Lancer Evo 9 and a built Subaru WRX.

-The 2014 Ford Fiesta is 100% factory stock and it rides on the same tires that were used for Michael Berenis complete the previous challenge which was a tire-killing track day at Sebring Raceway.

-This racing action took place on the quarter mile surface of Orlando Speedworld on a day with temperatures nearing 100 degrees and humidity of 85%. In other words, no-so-great weather conditions…especially for a factory turbocharged engine.

The Runs
With Michael Berenis running on an open track day, he was amidst a large crowd and that meant that he only got to make two passes down the quarter mile in the 2014 Ford Fiesta ST. On the first run, he ran a 16.04 at 86.6 miles per hour but he missed third gear and came out of the hole pretty gently. On the second run, he launched a whole lot harder and the stock tires spun hard. This killed his short times and forced him to run a slower 16.06 but on this run with no missed gears, he trapped 88.89 miles per hour.

Having spent lots of time at the drag strip in my days, I’ve seen plenty of cars run similar trap speeds with better traction and better short times than Michael’s 2014 Fiesta ST run in the low 15 second range so with a bit of practice – there is no doubt in my mind that the new Fiesta ST is at worst a mid 15 second car. With a very experienced dragstrip driver, this hot little Ford hatchback might be able to get near the 14 second range in better air and maybe a good set of tires. More impressively, this hot hatch can hit those numbers while comfortably offering 35 miles per gallon on the highway AND being quite capable of tearing up the road course. Click here for a look at Michael Berenis and his 2014 Ford Fiesta ST in action at Sebring International Raceway and enjoy the video below, showing the first example of the 2014 Fiesta ST in action on the quarter mile.