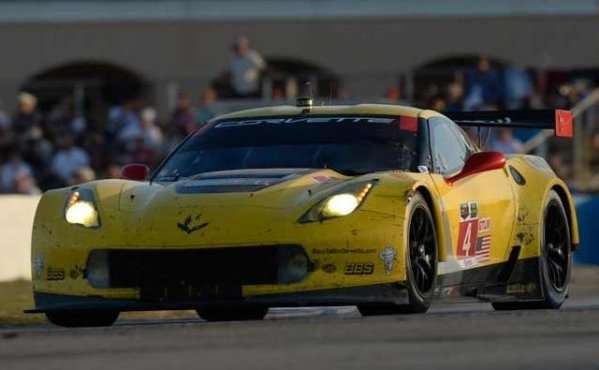 The two teams campaigning a new Chevrolet Corvette C7R headed into this weekend’s 12 Hours of Sebring endurance race with the hopes of improving on a slow start to the 2014 season, but those hopes were dashed by mechanical issues for the second race in a row.
Advertisement

The insanely successful Corvette Racing program began the 2014 season at the Rolex 24 at Daytona International Speedway with the brand spankin’ new Chevrolet Corvette C7R. After a decade of production-based endurance racing dominance, Corvette Racing fans had high hopes and very big expectations for the newest Corvette C7R race which is based on the 2015 Corvette Z06 road car. Fans expected to see the #3 and #4 Corvette C7R race cars hit the track in Daytona and continue the same winning ways that they exhibited with the C6R.

Unfortunately for both the fans and the teams, mechanical issues forced both of the Corvette Racing teams to settle for lackluster finishing positions at the Rolex 24 which were followed up by a less than stellar performance at the Sebring Winter testing.

Things appeared to be looking up in a big way when the teams hit the track for the first official practice sessions ahead of the 2014 12 Hours of Sebring race as both of the Corvette C7R teams spent time atop the GTLM class in terms of lap times. Things didn’t go quite as well in qualifying as the Corvettes turned fast enough laps to start 4th and 5th, but things were still looking good…until the race started.

On the opening lap of the 12 Hours of Sebring, Antonio Garcia was behind the wheel of the #3 Corvette C7R when a faster moving car ran into the back of his bright yellow Chevy, shoving it into the BMW race car position just ahead of him. This caused some body work damage to the front end, but that didn’t keep the #3 car from spending much of the first half of the race towards the front of the field. In fact, both of the Corvette C7R cars spent time leading the GTLM class and the #4 Corvette turned the fastest lap of the GTLM class for the entire event.

The good fortune wouldn’t last long, as the #3 Corvette was forced to make a lengthy repair stop to replace the fuel delivery system just after the 8 hour mark. Leading up to that emergency repair, the #3 Corvette C7R was having fuel pressure issues that were slowing the car down to they made the decision to hit the pits and fix the problem. Unfortunately, that put the #3 Corvette of Antonio Garcia, Jan Magnussen and Ryan Briscoe to go several laps down, eventually leading to an 8th place finish in the class and a 19th place finish overall.

"It is a shame. It went from a disaster to really enjoying the fight back. The car was running really good. The team did a really good job just to get it back after we crashed on the first lap, and the car was behaving really good. Good strategies, and step-by-step we were going up. It was going perfect. Then again, everything went south,” said Antonio Garcia. “It's definitely something we need to take care of for sure. We can take this as learning and try to fix every single thing because we have the speed, we have best team and we have a really good car."

The 2014 12 Hours of Sebring went much more smoothly for the #4 Corvette C7R team and the trio of Oliver Gavin, Tommy Milner and Robin Liddell spent much of the 12 hour race either in the top spot – or looking to take the top spot. That all came to an end late in the race when the #4 Corvette spun twice and then ran into engine issues in the final half hour which would put it off of the pace. The #4 Corvette would eventually finish 6th in class and 17th overall.

"It's very frustrating that we had that problem and issue at the end. Up to that point we were looking very strong. I got in the car toward the end to do the last couple of stints. I had a couple of issues inside the cockpit with lights that we moved around after night practice. And we're still finding our way a little bit with this new car,” said Oliver Gavin. “I got a bit hot coming into Turn 17 and had a bit of a spin. We caught back up to the Viper and Porsche. As I was right there with them, we started to have this problem with the engine and it started to miss a bit. I was pushing harder and harder to try and keep up. I pushed a little too hard coming out of Turn 5 and looped it off there. It was pretty clear we had a problem after that. It was a case of managing the situation until the finish. But I think the guys did an absolute fantastic job with the car this weekend. For 11 hours we had one of the quickest cars and best cars. We were in a position to fight with anyone and seemed like we were the class of the field."

The Chevrolet Corvette C7R teams will be back in action April 11th and 12th in Long Beach California.

The GTLM class in which the Corvette C7R competes was won for the second time in a row by a Porsche 911 RSR. An SRT Viper GTS-R finished 2nd, a BMW Z4 GTE was 3rd, a Ferrari 458 GT was 4th and another Porsche 911 rounded out the top five.