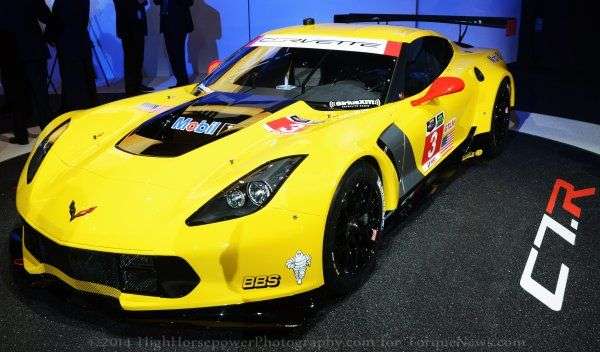 Corvette Racing confirmed recently that they will be sending a pair of Chevrolet Corvette Z06-based C7R race cars to the fabled 24 Hours of LeMans race in France for the 15th consecutive year – with the hopes of winning their 8th class victory over that 15 year span.
Advertisement

The new Chevrolet Corvette C7R race car is loosely based on the 2015 Corvette Z06 road car that debuted with the new endurance racer at this year’s North American International Auto Show in Detroit with its on-track debut coming a short time later at the Rolex 24 at Daytona International Speedway. Unfortunately for Corvette Racing fans, that Daytona debut didn’t go so well and the winter test session last weekend at Sebring International Raceway didn’t go so well either, but the Corvette teams can turn the whole season around at LeMans. Although there are plenty of endurance races here in the US, none carry the weight in the racing world of the 24 Hours of LeMans so regardless of how the Tudor Endurance Cup Championship is going when the new Corvette C7R teams arrive in France – a win on the biggest stage of all will make everything all better.

The Chevrolet Corvette C7R race cars that will compete in the 24 Hours of LeMans race will be numbered 73 and 74 rather than the #3 and #4 worn in the Tudor endurance series. Piloting the #73 Corvette will be regulars Antonio Garcia and Jan Magnussen being joined by Jordan Taylor, who helped pilot the Wayne Taylor Racing Corvette Daytona Prototype to a 2nd place overall finish at this year’s Rolex 24. The #74 Corvette C7R will be driven by regulars Oliver Gavin and Tommy Milner with Richard Westbrook completing the three driver lineup. This is the exact same lineup of drivers that was called upon for the Corvette Racing teams in 2012 and 2013 as well with finishes of 5th in 2012 and 4th in 2013 for the #73 car while the #74 car finished 6th in 2012 and 7th in 2013. Westbrook also drove with the Gavin/Magnusson team in 2011.

The current Chevrolet Corvette Racing program first entered in the 24 Hours of LeMans endurance race back in 2000 with a pair of teams campaigning the then-new Corvette C5R race cars. The teams first win came in 2001 and the Corvette race program has won some derivative of the GT class 7 times total (2001, 2002, 2004, 2005, 2006, 2009, 2011). Over the past 15 years, some very well known endurance racers including Andy Pilgrim, Ron Fellows, Scott Pruett, Johnny O’Connell and Max Papis have raced and won behind the wheel of the C5R and C6R Corvettes.

The 2014 24 Hours of LeMans race begins on June 14th and ends on June 15th, but the next action for the Corvette C7R race teams will be the 12 Hours of Sebring in March.