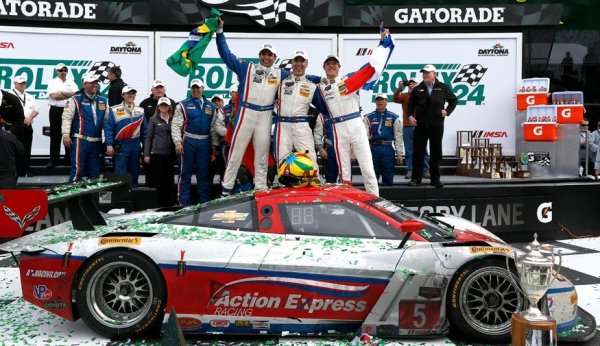 Corvette, Oreca, Porsche and Ferrari Win at the 2014 Rolex 24 at Daytona (Complete Results)

The 2014 Rolex 24 hour race at Daytona International Speedway took place this weekend and thanks to complete television coverage by a handful of Fox network channels, endurance racing fans got the best possible look at the fabled event as Corvette, Oreca, Porsche and Ferrari each claimed class wins with the Corvette taking the overall win.
Advertisement

The 2013 Rolex 24 hour race at Daytona International Speedway was won by a BMW-powered Riley but Corvette DP (Daytona Prototype) race cars took 2nd, 4th, 5th 7th and 8th. Those same Corvette DP teams came into the 2014 Rolex 24 with the hopes of knocking out the now Ford EcoBoost-powered Riley race cars and the Corvettes spent no time showing that they were the best cars in the field. The Corvette DP teams came out of the gate very hard in qualifying, claiming the 1st, 2nd, 4th, 5th and 7th starting spots while Ford EcoBoost powered Riley DPs grabbed the 3rd and 5th spots – preventing the Corvette teams from securing the top five starting spots.

In the early portion of the race some of the Ford EcoBoost Riley cars were able to challenge the 5 Corvette DPs but all of the Ford’s ran into trouble during the 24 hour long race and that left the prototype (P) class pretty much all to the Corvettes. The Corvette DP took a big hit when the #99 car – which was the fast qualifier for the entire field – was involved in a horrific crash roughly 3 hours into the race. Memo Gidley was piloting the #99 Corvette and was quickly working his way through a group of slower class cars when he entered the infield road course portion of Daytona International Speedway behind the multicolored #65 Ferrari. As Gidley swung to the inside to pass that Ferrari, the glare of the setting sun made it impossible for him to see the #62 Ferrari that was coasting without power. Gidley slammed into the Ferrari at very high speed, driving his Corvette DP under the back end of the Ferrari before flipping it out of the way. Gidley would be cut out of the car and flown to a nearby hospital where he continues to be treated for broken arms, legs and a broken back. The driver of the Ferrari, Matteo Malucelli, was also taken to the hospital and treated for less severe injuries.

Although the #99 was the fastest of the Corvette DP entries, the Chevrolet prototype teams were hardly affected as when the race reached its final hour only three cars were on the lead lap and all of them were Corvette Daytona Prototypes. The 4th Corvette DP in the class finished 4th 2 laps back while the best finishing non-Corvette DP was the Nissan powered Oreca prototype in 5th – 3 laps behind the leader. A caution with about 10 minutes left in the race setup a shootout to the finish between the Action Express Racing #5 Corvette DP with Joao Barbosa at the wheel and the #10 Corvette DP of Wayne Taylor Racing with Wayne’s son Jordan at the wheel. Barbosa spent the last few minutes pulling away from Taylor so while there technically was a race for the overall win…it isnt a very heated battle.

In the Prototype Challenge (PC) class there was far less mystery as all 9 of the entries in the PC class were Oreca FLM09 race cars. Probably because there wasn’t much of a brand versus brand story, there wasn’t much coverage of the PC class but the #54 car brought home the class win while finishing 9th overall. There was no real race to the checkered flag in the Prototype Challenge class as the second place car was not on the same lap as the class leader in the final minutes of the race.

In the GT LeMans (GTLM) class, we saw the greatest level of competition with Porsche, BMW, SRT and Chevrolet all spending time at the front of the class during the 24 hour race. The SRT Vipers were the fastest team in qualifying taking the 1st and 3rd spot in the class with the #911 Porsche 911 taking second and the #4 Corvette C7R starting 4th. The Vipers set the pace early on but power steering problems for the #91 car and a crash for the #93 car knocked the SRT race cars out of contention. After one of the Corvette team cars left the race around the midpoint due to overheating issues, the #4 Corvette spent the day near the front of the class only to run into drivetrain problems late in the race that forced the remaining C7R back into the 5th spot in the class. With both the Corvettes and Vipers out of reach of the win, the #911 Porsche and the #55 BMW battled down to the last few laps for the win but the Porsche got the easy victory when the BMW was blocked by slower traffic in the final minutes. The #911 Porsche won GTLM while the #55 BMW took 2nd and the #91 Viper came from 12 laps down to finish in 3rd place in the class, just 4 laps behind the class winner. The #56 BMW finished 4th and the #4 Corvette finished 5th.

Finally, the GT Daytona (GTD) class proved to feature the most exciting – and perhaps the most controversial finish in the 2014 Rolex 24. As the largest field in the Rolex 24 entered the final 10 minutes after the late caution, 4 cars were on the lead lap and two of those cars were battling neck and neck for the lead. The #555 Ferrari F458 driven by Alessadro Pier Guidi was in the lead and the #45 Audi R8 driven by Markus Winkelhock was in second and those two cars went door to door for several laps with plenty of paint exchanged but the racing continued on. However, as the two raced through the infield road course and went through a narrow section of the track side by side, Pier Guidi in the Ferrari held his line and Winkelhock had no choice but to either hit the Ferrari or run off of the track. The Audi driver chose to run through the dirt for a short stretch and that was all that the #555 Ferrari needed to pull away and win the race. Immediately following the race, the #555 was given a 75 second penalty for unavoidable contact even though the replay very clearly showed that there wasn’t any contact. That penalty moved the #555 team from 1st to 4th and gave the win to the Flying Lizard team and their Audi R8 but roughly an hour after the race had ended, the IMSA officials overturned their original decision and gave the win back to the black Ferrari. The #555 Ferrari took the win with the #45 Audi in second, the #58 Porsche 911 was third, the #72 Ferrari was 4th and the #35 Audi R8 rounded out the top five for GTD.

The video below shows the wreck involving the #99 Corvette DP and the #62 Ferrari. Complete final standings are listed below the video.