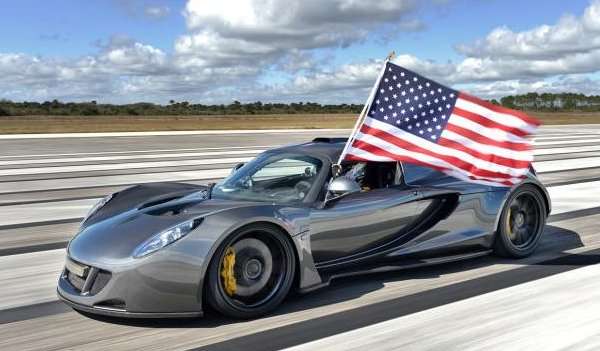 The incredible Hennessey Venom GT has once again set a top speed record with the help of the Corvette ZR1’s LS9 V8 – but even though the Venom GT turned in the highest top speed run of any street legal car ever, a set of restrictions prevent this recent record run from counting with the Guinness Book of World Records.
Advertisement

If you are not familiar with the Hennessey Venom GT, it is a unique hypercar based on a Lotus chassis and powered by the same LS9 V8 from the Chevrolet Corvette ZR1. Well, it isnt technically the SAME LS9 V8 as this particular 7.0L GM V8 has been massively modified with a set of big twin turbochargers to produce a skosh more power than the 638 horsepower offered by the ZR1 – 606 more horsepower to be exact. The Hennessey Venom GT’s twin turbo GM V8 makes 1,244 horsepower and 1,155lb-ft of torque on 93 octane pump gas with all of that power being put to the ground with the help of a set of DOT approved Michelin Pilot Sport Cup tires. Each Venom GT costs $1.2 million US dollars to buy.

The Hennessey Venom GT already appears in the Guinness Book of World Records for turning in the fastest ever run from a stop up to 186 miles per hour (300 kilometers per hour) in just 13.63 seconds, but Hennessey boss John Hennessey was looking to prove that his Venom GT was the fastest car in the world in terms of top speed. To achieve this, Hennessey worked out a deal with NASA over the course of two years worth of negotiations to use the 3.22 mile landing runway at the Kennedy Space Center in Florida to see just how fast the Venom GT could go in a long, straight line.

Driver Brian Smith drove the Hennessey Venom GT down the 3.22 mile airstrip and with the help of a twin turbocharged LS9 Corvette ZR1 engine, the Venom reached a stunning top speed of 270.49 miles per hour. That comfortably beats the record top speed turned in by the Bugatti Veyron Super Sport of 267.81 miles per hour and according to Smith; the Venom GT had more left in the tank on the 270mph run.

Due to the fact that it would take a calculated 7/10 of a mile to slow the Hennessey hypercar from 270mph, Smith was only able to accelerate for about 2.6 miles before beginning the extensive slowing down process. The driver did say that the Venom GT could have gone faster if they had more room and for the record, the Venom GT was originally stated as having an untested top speed of 278 miles per hour. The team hasn’t gotten a big enough track to hit those speeds, but it has still gone faster than any other street legal car in the world. Unfortunately for the folks at Hennessey, this 270.49 mile per hour run will not “go down in the record books” as the Venom GT’s run doesn’t comply to Guinness standards – and the car itself does not either.

Anyone who wants to officially establish the Guinness World Record for having the car with the highest top speed is required to make two runs on the same surface – one in each direction and the official top speed is the average of the two runs. When the Bugatti Veyron Super Sport set the record with a speed of 267.81 miles per hour, the team made the run in each direction and took an average speed. Since NASA only agreed to let the Hennessey team make one high speed pass with the Venom GT, the run cannot be accepted for the fastest top speed record.

The other problem is that the Guinness people now define a production vehicle as a car that has seen at least 30 production units made available for sale. Hennessey is only building 29 examples of the Venom GT so, by Guinness World Record standards, the Venom is not a production car.

Even though this 270+ mile per hour run by the Hennessey Venom GT will not go into the Guinness record books, it will still serve as an excellent marketing tool for the folks at Hennessey. The odds are very good that most Bugatti Veyron or Hennessey Venom GT buyers will never hit the top speed – whether it is 265 or 270 miles per hour – but there is no question that in the ultra competitive world of hypercars, being able to point out a higher top speed could help sway buyers to go one way or the other. It might not officially be the fastest car in the world, but with a top speed of 270.49 miles per hour, the American built and American V8 powered Venom GT has staked its claim as the world’s fastest car.

ronald axelson wrote on February 28, 2014 - 12:22am Permalink
the bugatti now costs a little more than 3 million. This means I can have 2 corvettes and a beach front house in naples fla
david wrote on November 20, 2016 - 8:44am Permalink
1. The Hennessey Vernon F-5 No#2 Second Car is built today too. It will be new speed Record is top speed of 290 Miles Per Hour too!
Rafaela wrote on February 24, 2017 - 8:08am Permalink
When I initially commented I clicked the "Notify me when new comments are added" checkbox and now each time a comment is added I get several emails with the same comment. Is there any way you can remove people from that service? Appreciate it!
Armen Hareyan wrote on February 24, 2017 - 8:44am Permalink
Hi Rafaela. It depends if people reply to your comment or if they make a new comment. However, you can safely remove yourself from a link inside the notification email. Thank you for reading TorqueNews.com and being active commenting under our car stories.
Danuta wrote on July 2, 2017 - 1:13pm Permalink
Somebody essentially lend a hand to make critically posts I would state. This is the very first time I frequented your website page and thus far? I amazed with the research you made to create this particular post extraordinary. Magnificent process!
Bebe wrote on July 2, 2017 - 3:15pm Permalink
Way cool! Some very valid points! I appreciate you writing this post and the rest of the site is very good.
Judson wrote on January 30, 2018 - 12:08pm Permalink
My brother suggested I might like this blog. He used to be entirely right. This submit truly made my day. You can not believe just how much time I had spent for this information! Thank you!