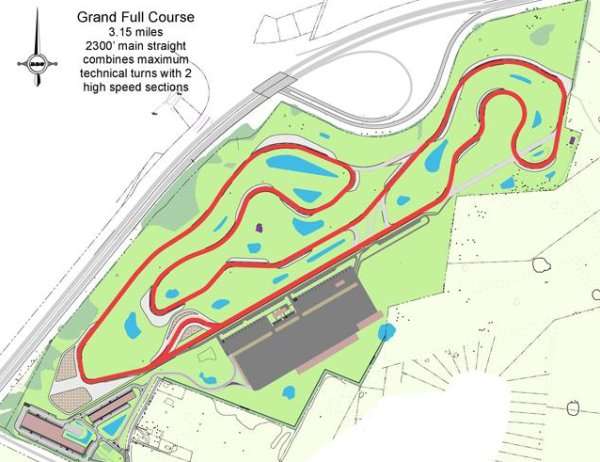 While some automotive enthusiasts might not know this, there is a massive motorsports complex being built on property next to the National Corvette Museum in Bowling Green Kentucky and while this multi-track facility is some 7 months from being ready to race – the management has already received well over a hundred reservations for planned events.
Advertisement

The National Corvette Museum Motorsports Park was first proposed back in 2010 and the goal was to design a racing facility that could cater to a wide variety of racing types – all of which are areas in which the Chevrolet Corvette excels (except for karting – of course). The original plans called for a pair of road courses, a high speed karting track, a huge autocross tarmac and a quarter mile drag strip. Things changed a little between the concept and design stages of the Corvette museum racing facility but that doesn’t make the upcoming gearhead’s playground any less exciting.

The pièce de résistance of the National Corvette Museum Motorsports Park (NCMMP) is a sprawling road course that transforms into five different race tracks to cater to different types of racing. The longest version of the NCMMP is the Grand Full Course (shown above) which measures 3.15 miles but there is also the Grand Max Straight Course (2.87 miles), the Corvette Race Loop Course (1.97 miles), the West Circuit Course (2 miles) and the East Circuit Course (1.1 miles). This road course setup has been designed to test a car’s capabilities in every dimension of road racing from a long high speed straightaway to a variety of intricate technical sections that put suspension and braking systems to the test.

Aside from the road course sections, the National Corvette Museum Motorsports Park contains an autocross/skid pad tarmac that covers 21 acres, a huge paddock area for cars and haulers, a high tech control tower, a commercial business park, classrooms for racing instruction, a pavilion area, concession stands and a fueling station. Sadly, there is no mention of a drag strip but the Corvette museum facility could follow the lead of other tracks which set up “temporary” drag racing areas on their long straights. With the front stretch extending for almost 4000 feet straight ahead – there is certainly plenty of room to fit in a half mile drag strip area (including shutdown space).

The National Corvette Museum Motorsports Park runs along 1.5 miles of Interstate Highway 65 in Bowling Green Kentucky and the land on the opposite said of I-65 houses both the Corvette production facility and the National Corvette Museum. While we can certainly expect to see plenty of new and old Corvettes in action at this sprawling racing complex, the management is quick to point out that this facility is open to all makes and models of vehicles…not just Corvettes.

With all of this in mind, it shouldn’t come as much of a surprise to learn that motoring enthusiasts in the Bowling Green area and all over the country are excited about the opening of this new motorsports park. The National Corvette Museum Motorsports Park is scheduled to open in August 2014 to help celebrate the 20th anniversary of the National Corvette Museum but reports indicate that there are more than 118 events already booked and scheduled for the facility once it opens. In addition to events and rental days, the NCMMP will also serve as the official testing facility for the production Corvette program (in addition to the Milford Proving Grounds) as well as the official test track for the C7R Corvette race cars sponsored by GM and run by Pratt & Miller. There will also be high performance driving classes held at the facility sometime after it opens its doors to the public later this year.

Once the National Corvette Museum Motorsports Park opens, it will introduce a whole new level of accessibility to those racers who live in the area but it will likely also serve as a choice destination for Chevrolet Corvette owners who want to either learn to go very fast – or who already know how but want to do so on a track that was designed with the Corvette in mind.

That being said, if your business, race team or driving club wants to schedule time to yourself at the new National Corvette Museum Motorsports Park, you may want to start making arrangements now as with so many events booked with 7 months until it opens – it could be very tough to get any track time in the first year of the track’s existence.