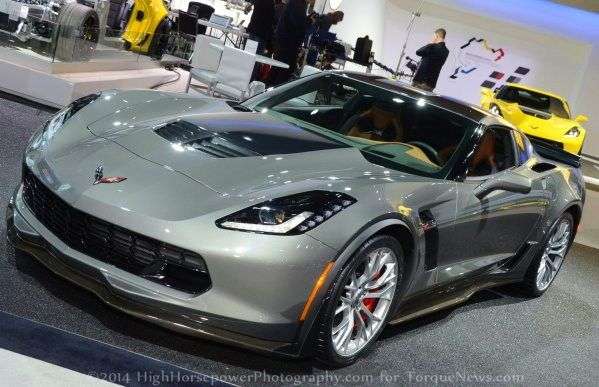 When the 2015 Chevrolet Corvette Z06 hits the road early next year it will pack an impressive collection of high tech features that should make it the best performing General Motors vehicle ever but it will also feature just as much technology in the cabin as any new car sold in the US.
Advertisement

There was a point in time where a supercar only needed to be very, very fast and while the 2015 Chevrolet Corvette Z06 easily meets that criteria – the supercar segment has changed quite a bit over the past few years. No longer is just having a ton of power or incredible handling attributes enough – now a modern supercar needs to offer all of the interior gadgetry as a state of the art luxury sedan.

Fortunately, the 2015 Corvette Z06 is a supercar in every way with awe-inspiring handling, massive amounts of power and a cockpit that has just about every gadget that you could ask for and more.

The 2015 Chevrolet Corvette Z06 features levels of drivetrain technology that are unrivaled among American vehicles (not including other Corvettes, of course) like the Magnetic Selective Ride Control suspension system and the new supercharged LT4 V8 but those are items that we have almost come to expect from the top of the line Corvette. After all, the previous C6 Corvette ZR1 featured a similarly powerful supercharged engine and the same Magnetic Selective Ride Control system but the C7 Corvette Z06 takes interior technology to a new level and today we have a video from General Motors that quickly highlights the gadgets that will be found in the new Z06 when it arrives in showrooms next year.

This official Chevrolet video includes Ryan Vaughan, General Motors’ design manager of performance car interiors. Vaughan walks us (quickly) through the list of high tech features found in the 2015 Corvette Z06 starting with the new 8 inch reconfigurable gauge cluster that includes all sorts of options ranging from your basic vehicle parameters (RPM, coolant temperature, oil pressure, etc) as well as performance measurements such as 0-60 times, quarter mile times, G forces and braking distance. This adjustable readout works with General Motors’ most recent heads up display that projects information from the gauge cluster up onto the inside of the windshield so that the driver can get much of this information without looking away from the road. Both the heads up display and the reconfigurable gauge cluster are controlled via the new Corvette’s steering wheel mounted buttons.

Next up is the 8 inch touch screen mounted high on the center stack of the 2015 Chevrolet Corvette Z06. While pretty much every new car, truck and SUV sold in America at this point includes at least an option for a fancy touch screen infotainment system, the 2015 Corvette Z06 takes infotainment to a whole new level. Not surprisingly, the new Z06 features what have become the expected gadgets like a high end sound system, a voice activated navigation system and a dual zone climate control but far more importantly – the C7 Z06 features the new Performance Data Recorder (PDR) system that we have talked about before here on TorqueNews.

This system integrates a front-facing camera, an SD memory setup and an elaborate telemetry system to help Corvette Z06 drivers review their efforts while tearing around the race track and while lots of automakers including things like 0-60 timers and built-in quarter mile timers – the C7 Corvette is the first car sold in America to feature this in-depth performance recording system. This new video offers us a very quickly look at the Z06’s PDR system and honestly, this looks like the coolest performance car technology that I have seen since the introduction of adjustable suspension systems.

Finally, the 2015 Chevrolet Corvette Z06 comes with the same App Shop setup as the rest of the Corvette lineup which allows owners to customize the different types of information offered by their new American supercar. When coupled with the driver’s cell phone, the Chevrolet App Shop can introduce all sorts of information ranging from restaurant and gas station locations to weather and traffic apps...and much more.

When the 2015 Chevrolet Corvette Z06 arrives early in 2015 - it will almost surely set the standard by which many supercars are judged - both here in the US and around the world.