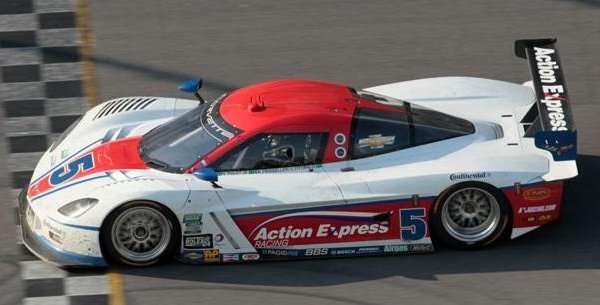 This weekend’s 2014 Rolex 24 hour race at Daytona International Speedway had its upsides and downsides for Chevrolet Corvette fans as a Corvette Daytona Prototype claimed the overall win while the new Chevrolet Corvette C7R teams struggled with mechanical problems.
Advertisement

General Motors used the 2014 North American International Auto Show to introduce the new Chevrolet Corvette C7R race car and while race car debuts are somewhat unusual – the C7R is almost as big of a deal to GM as is the new Z06 that debuted on the same stage. Based on the 2015 Corvette Z06, the C7R enters as the newest in a long line of very successful endurance race cars built by Pratt & Miller with the most recent – the Corvette C6R – winning the 2013 American LeMans Series driver and manufacturer championships.

When GM introduced the new production-based Corvette C7R in Detroit the automaker also announced that (not surprisingly) the C7R would make its on-track debut at the 2014 Rolex 24 at Daytona International Speedway and based on the success of the Corvette racing program – Chevy racing fans had a good reason to almost expect to see a Corvette in the winner’s circle.

Unfortunately for GM and Corvette racing fans, the Rolex 24 debut of the C7R didn’t go as planned…at all.

Things got off to a decent start with the #3 and #4 Corvette C7R race cars being among the quicker GTLM cars in the first round of practice but the SRT Viper GTS-R teams came back strong in practice round #2 to claim the best times.

That trend followed into qualifying where the #4 Corvette was only able to muster the 4th best time while both of the Vipers and the #911 Porsche turned in better times to fill the top three starting spots in the GTLM class. The #3 Corvette ran into mechanical problems ahead of qualifying so that team was forced to start at the back of the field but problems during qualifying aren’t the end of the world in a 24 hour long race.

In the early going, both of the Corvette C7R race cars found themselves towards the front of the GTLM class and things were looking pretty good for both of the teams while the #91 Viper led the class. Things seemingly got much better for the Corvettes when the #91 Viper was forced into the garage area with a power steering problem followed by a crash for the #93 Viper so before the halfway of the race – two of the biggest competitors to the Corvettes were many laps off of the class leading pace.

That didn’t last long though as the #3 Corvette ran into overheating issues just shy of 13 hours into the race that forced them to retire from the race altogether. That Corvette team would end up 10th in the GTLM class and 60th overall.

Although things went very poorly for the #3 Corvette, the #4 Corvette continued to stick around the front of the field along with the class leading Porsche 911 and BMW Z4 well into the fourth quarter of the 24 hour race. The bad news for GM was that the #91 Viper was still every bit as fast as it was in qualifying and in the early stages of the race so while the #4 Corvette was battling with the #911 Porsche and the #55 BMW, the #91 Viper was making up laps.

By the time the field got into the final couple of hours, the #91 Viper was on the same lap as the #4 Corvette and the C7R team had themselves a race for third – until a gearbox problem with the new Corvette race car forced the #4 onto pit road for lengthy repairs. Due to that problem, the #4 Corvette was forced to finish 5th in the class and 16th overall; 2 laps behind the #56 BMW and 9 laps behind the #91 Viper.

Things could have certainly gone worse for the Corvette C7R race teams but 5th and 10th in the class was a disappointing outcome for the production-based Corvette teams.

The good news for General Motors and Chevrolet racing fans is that the Corvette DP (Daytona Prototype) race cars were dominant in qualifying and they were every bit as dominating throughout the 24 hour long race. 5 of the top 7 overall qualifying positions were filled by these radically designed Corvette prototypes – meaning that the GM camp clearly had the best line to the win. Although other cars would challenge on and off during the course of the 24 hour race, the top five was almost always packed full of Corvette DPs and when the checkered flag fell around 2:10pm on Sunday, Corvette DPs claimed each of the top 4 finishing positions.

The winner was the Action Express Racing team Corvette #5 (shown above) with drivers Joao Barbosa, Christian Fittipaldi and Sebastien Bourdais with Barbosa driving the final leg and holding off a strong charge by the 2nd place Corvette DP driven by Jordan Taylor.

The only Corvette DP that did not have success in the 2014 Rolex 24 was the #99 car driven by Alex Gurney to the overall pole position in qualifying. Around the 3 hour mark of the race, Memo Gidley was running towards the front of the field as he entered the infield road course portion of the track with his red Corvette DP. Unbeknownst to Gidley, the #62 Ferrari F458 had lost power in the infield portion of the track and was coasting along the left side of the surface. As Gidley approached the slow moving car, he was racing directly into the setting sun as he swung out around a slower moving car – directly into the back of the #62 Ferrari driven by Matteo Malucelli.

This resulted in one of the worst crashes that I have ever seen, sending both Malucelli and Gidley to the hospital. The video of the crash is included below and as this piece goes live – Gidley is reportedly in stable but critical condition having already undergone several surgeries to repair damage to his arms, legs and spine.

Even though the fastest Corvette DP in the field was forced out of action in the horrific crash, the other four Corvette DPs were able to represent the Chevrolet Racing name well. As for the production-based Corvette C7R race teams, the Rolex 24 was disappointing but the teams have a long year of racing ahead of them to shake out the bugs including the 2014 American LeMans Series.