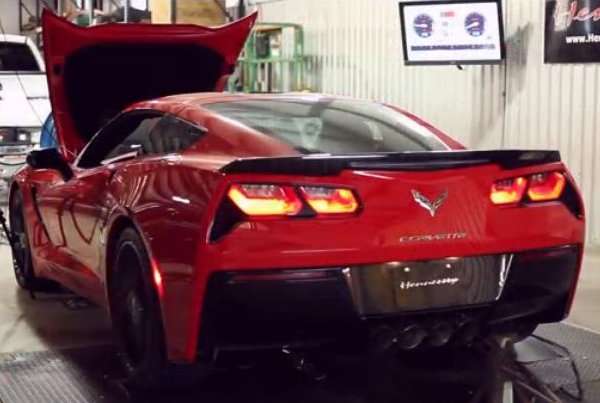 The Hennessey Twin Turbo 2014 Corvette Stingray Screams on the Dyno

We have already watched the new Hennessey Corvette Stingray with the HPE600 package break the 200mph barrier and today we get to watch as the Texas tuner unleashes their HPE700 package for the 2014 Corvette Stingray on the dyno – with very impressive aural output.
Advertisement

The Hennessey HPE600 package that helped the 2014 Chevrolet Corvette Stingray top 200 miles per hour on a Texas toll road makes 603bhp thanks to a naturally aspirated setup featuring high performance cylinder heads, a big camshaft and high flow headers but for 2014 or 2015 Stingray owners who feel that they need a skosh more power there is the Hennessey HPE700 Twin Turbo package.

This setup uses a set of ball bearing turbochargers, an unspecified fuel system upgrade, a stainless steel exhaust setup, and air to air intercooler and a proper engine calibration to deliver 708bhp at 6,300rpm. This setup also makes for one angry sounding American supercar when this beast is strapped down to the dyno and thanks to the Hennessey video attached below – we get to hear the HPE700 twin turbo Stingray in action.

I have to say – whether it is naturally aspirated, turbocharged or supercharged – the more I hear of the 2014 Chevrolet Corvette Stingray’s LT1 V8, the more I fall in love with the sound. We have watched and listened to a handful of super-modified C7 Corvettes now and while each has a distinct sound based on the type of build, all of these built LT1 V8s sound incredible and the HPE700-equipped Stingray is certainly no exception.

As the video begins, we hear the Hennessey twin turbo Corvette Stingray roar to life through the stainless steel HPE exhaust but unlike other new Stingray videos we have featured, the lack of a big lumpy camshaft means that this particular Corvette has a surprisingly calm idle. It is a little louder than a stock C7 Corvette but considering that this beast has over 700 horsepower – it doesn’t sound all that much more radical than a stock 2014 Stingray.

Even as the driver of this red Stingray goes through the first few gears as he prepares for the dyno blast, this Corvette doesn’t sound as mean as other new Stingrays but when the driver really cranks up the new LT1 – that stockfish sound goes away in a hurry. Around 26 seconds into the video, the driver climbs into the RPMs and it only takes a few seconds before the roar of the LT1 and the faint whistle of the twin turbochargers make it clear that this is no stock Corvette.

Just as quickly as the HPE700 twin turbo Corvette ramped up, it was headed back down to idle with a subtle hiss of the blow off valves before the video jumps to another high RPM clip captured over the engine bay. This gives us a chance to hear the new twin turbo LT1 from a different angle and, not surprisingly, the roar isn’t all that much quieter from the side of the car.

The video ends by showing us the results of this HPE700 Corvette Stingray dyno run – with 608.28 rear wheel horsepower and 564.89 lb-ft of rear wheel torque. The Hennessey website doesn’t list the pricing for the HPE700 twin turbo package for the 2014 Corvette but the company has stated that only 24 of these kits will be sold for the 2014 model year so if you want your new Stingray to run and sound as awesome as the car in the video below, you had better contact Hennessey for more information right away!