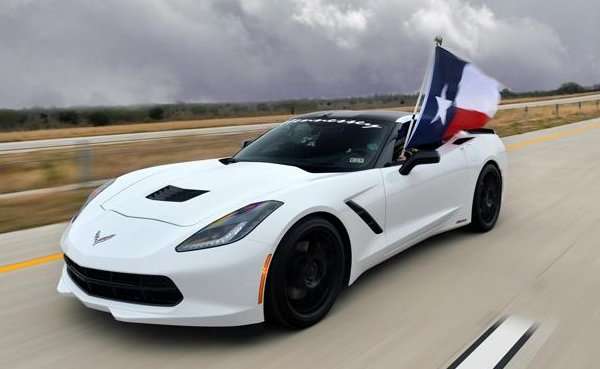 On Monday we featured a short clip of a Hennessey tuned 2014 Chevrolet Corvette Stingray as it blasted down a Texas toll road and as expected we now have a great video showing the blistering fast run from a variety of angles – with a verified top speed of 200.6 mph making the HPE600 C7 Corvette the fastest new Stingray in the world (right now).
Advertisement

When the incredibly short Instagram video surfaced earlier this week showing a 2014 Chevrolet Corvette Stingray sporting the Hennessey logo blasting past a bunch of Texas State police officers, we knew that the folks from Hennessey Performance had something special in store for all of us. After all, Hennessey is the same Texas based tuner who took a 1,200 horsepower Cadillac CTS-V Coupe down another Texas highway to test highway speed cameras with a recorded speed of over 220 miles per hour so when we see a Hennessey badged vehicle surround by police on a public road – we can be sure that something interesting is to follow.

Surprisingly, the Hennessey tuned 2014 Chevrolet Corvette Stingray that we saw blasting past cops on the Texas highway didn’t pack the gigantic power of the CTS-V Coupe last October and even more surprisingly – this modified C7 Stingray “only” went a shade over 200 miles per hour on this run. However, regardless of the work done to the car, the fact that this brand new 2014 Corvette topped the 200 mile per hour barrier makes it the first to do so (with proper verification) and as virtue of such, the Hennessey Corvette Stingray Coupe shown here is the fastest 2014 Corvette in the world. I don’t have any doubt that other new Corvette owners and tuning shops will put some effort into stealing Hennessey’s claim of building the fastest C7 in the world but for the time being – Hennessey Performance has officially built the world’s fastest new Corvette.

Unlike the 2012 Cadillac CTS-V Coupe that topped 220 miles per hour, the 2014 Corvette Stingray that Hennessey used to break the 200 mile per hour barrier did not feature a forced induction setup. Instead, Hennessey called upon their new HPE600 package for the C7 Stingray that lifts the output of the new LT1 V8 from 460 horsepower to an impressive 603 horsepower with the help of high flow cylinder heads, long tube headers, a custom camshaft package and a proper engine tune. That’s right – with just a good set of cylinder heads, a camshaft and a set of headers, the 2014 Hennessey tuned Corvette packs over 600 street legal horsepower. It should be noted that the bright white Stingray that John Hennessey piloted down the Texas highway to 200.6 miles per hour was also equipped with a nitrous oxide package that is not included in the HPE600 C7 package so those looking to go 200 miles per hour in their new Corvette might need a little more than just that HPE600 setup but I would expect that the folks at Hennessey would be happy to sell a nitrous setup or at least point customers in the right direction.

Those of you wondering why Hennessey was blasting down a Texas highway at speeds in excess of 200 miles per hour in a 2014 Corvette; there is actually a pretty interesting explanation. The highway on which the Corvette was being tested is the brand new State Highway 99 and with climbing speed limits in the Lone Star State, local authorities wanted to make sure that this new road surface was smooth enough for motorists traveling at high speeds. Hennessey was also helping to test a new Radio Frequency ID toll system (RFID) and for the record – this new system was able to clearly capture the license plate of this 2014 Corvette as it ripped through the toll cameras at over 200 miles per hour.

The video below shows the Hennessey tuned 2014 Chevrolet Corvette Stingray as it made this record setting run with tons of camera angles along the side of the road and inside of the car… with a look at both a GPS speedometer, a police speed gun and the standard Corvette speedometer. The sound of this Corvette is just as great as the accomplishment of being the fastest C7 in the world so make sure that you have your speakers cranked up when you watch the video below.