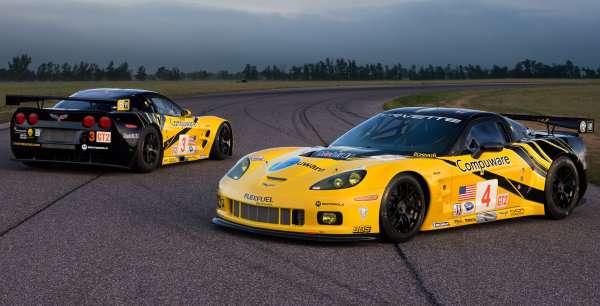 The bad news is that we know less about the upcoming Chevrolet Corvette C7.R race car than we do about the Corvette Z06 that will also debut at the 2014 North American International Auto Show in Detroit’s Cobo Hall. Based on their success in past years, I would expect that racecar builders Pratt & Miller would be involved in the production of the newest factory-backed Corvette racers with a body that is very similar to the 2014 Corvette Stingray (or perhaps more like the upcoming Corvette Z06) but with the obvious racing-only enhancements such as a front fascia that almost touches the ground, huge wheel flares, an ultra low stance and a massive rear wing.

In terms of the drivetrain, the new Corvette C7.R could go a variety of directions depending on which sanctioning body this first car is designed to appease. During the C6.R campaign, the GT1 version of the race-only Corvette relied on a Katech built 7.0L V8 similar to the one used in the C6 Z06 which offered 590 horsepower (engine code LS7.R). In the “lower performance” GT2 class (the Corvette shown above) which included the American LeMans Series cars, the C6.R first relied on a 6.0L version of the LS7.R with 470 horsepower but when the GT2 class set an engine size cap at 5.5L, Katech responded with a new race engine that just kept on winning…even though the ALMS teams were penalized with weight additions due to the fact that their engine was quite a bit larger than some of the competitors.

Considering that the new C7.R Corvette is debuting alongside the 2015 Corvette Z06 and in past years, the Corvette race program shared some attributes with the Z06 road car, I would expect that the C7.R race car will have some derivation of the engine powering the new Z06. It is expected that the 2015 Corvette Z06 will pack a supercharged LT4 engine that was originally rumored to be smaller than the 7.0L beast in the C6 Z06 and early rumors that suggested that the Z06 would pack twin turbos rather than a supercharger suggested that the more powerful of the modern Corvette engines would measure 5.5L. I have to wonder if perhaps those rumors of a twin turbocharged 5.5L Corvette engine weren’t unknowingly discussing the Corvette C7.R race engines rather than the road engines that will seemingly be supercharged. In any case, I fully expect that the C7.R will be powered by some version of the new GM LT engine architecture and realistically, the new LT1 from the Corvette Stingray might be plenty of engine for the future Corvette race teams with only minor modifications. Keep in mind that the C6.R used the 6.0L LS7.R to make 470 horsepower while the 2014 Stingray’s LT1 makes 460 horsepower with the high performance exhaust package. There is no question that some modifications that would make the LT1 illegal for street use in some areas (thanks to emission laws) such as a monster cam setup, freer flowing cylinder heads and exhaust headers would allow the LT1 engine to make just as much power as the previous American LeMans engine…if not more.

Regardless of what the Chevrolet Corvette C7.R looks like or what it packs under the bulging hood, we can expect that the next generation Corvette factory backed racecar will continue the long tradition of racing success that included a championship in the American LeMans Series in 2013. The 2015 Corvette Z06 will be the most track capable road going Vette ever but there is a good chance that the C7.R will be the best race-ready Corvette ever. We will find out just how good the C7.R is very quickly as it is slated to make its racing debut at the Rolex 24 at Daytona on January 25th.

The start of the 2014 North American International Auto Show in Detroit is just 32 days away so in just over a month – we will have a very clear look at the future of both the American sports car and the American road racing scene.