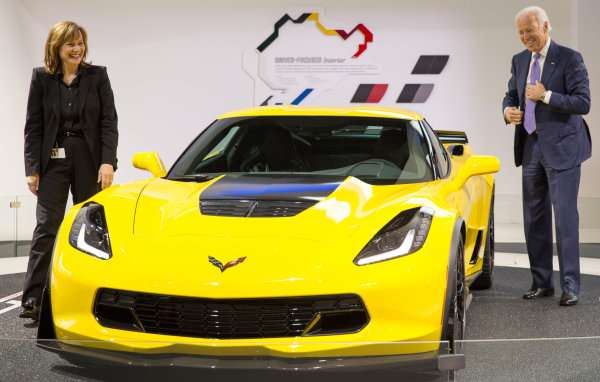 When the 2015 Chevrolet Corvette Z06 debuted recently in Detroit there were plenty of reasons to love this new American supercar but some politically minded citizens will have one more reason to love the Z06 – current Vice President Joe Biden commented that being able to drive is was a reason to not run for President of the United States.
Advertisement

Joe Biden made a stop at the 2014 North American International Auto Show and while he looked a little here and there at the various automakers, Biden spent a particularly long time in the Chevrolet display with the 2015 Corvette Z06. Biden is the proud owner of a 1967 Corvette so it doesn’t come as much of a surprise that he would be so interested in the new Z06. While checking out the new C7 Corvette Z06 alongside new General Motors CEO Mary Barra, Biden was very impressed with the new top of the line Corvette. In fact, he was so impressed that he commented that the new Z06 could be one reason to not run for President of the United States in the next election.

That’s right – Vice President Joe Biden stated that being able to drive the 2015 Chevrolet Corvette Z06 was enough of a reason to not want to be President of the United States of America. You see, while Joe Biden owns a 1967 Chevrolet Corvette, he hasn’t been able to drive his classic American sports car – or any other car – since he took office. Not being allowed to drive is one of the key items on the long list of security precautions taken to protect both VP Biden and President Obama. The President and Vice President don’t drive while in office so whenever they have to go anywhere, they have specially trained secret service drivers and a government vehicle that gets them around. That might sound nice to some people but for a car guy, not being allowed to drive must be pure hell and with Biden being as much of a car guy as any of recent high ranking US government officials – it must be tough of Biden to not be able to enjoy his ’67 Vette.

This means that should Joe Biden run for President and win the election, he would not be able to drive his 1967 Corvette for four more years (unless he was impeached or something) but he also wouldn’t be able to drive the new 2015 Chevrolet Corvette Z06.

Now it should be clear to everyone that Joe Biden was almost certainly kidding when he stated that being able to drive the 2015 Chevrolet Corvette Z06 was a good enough reason to not want to be President of the United States but for the many political commentators around the various social networks – this is one more reason to love the new Z06. Biden (like every other American politician ever) has been heavily criticized since even before President Barrack Hussein Obama got into office so some people shudder at the idea of a “President Biden”.

I imagine that if he was actually serious about this, there would be a great many wealthy individuals around the country lining up to buy former Vice President Biden a 2015 Z06 (once his current term has ended, that is) to keep him out of the office of President.

If Biden was serious, that comment could actually help him get a free 2015 Chevrolet Corvette Z06 if he spoke to the right people but that would be borderline corrupt and we all know that there is no place in American politics for corruption. In any case, it will be interesting to see if Joe Biden opts to buy a new Z06 once he is out of office and is once again permitted to enjoy cruising the open road in a high performance Chevy.

Smoothie wrote on March 21, 2015 - 5:12pm Permalink
Somebody better tell Biden and the democraps that Corvette has always been a Republican car.