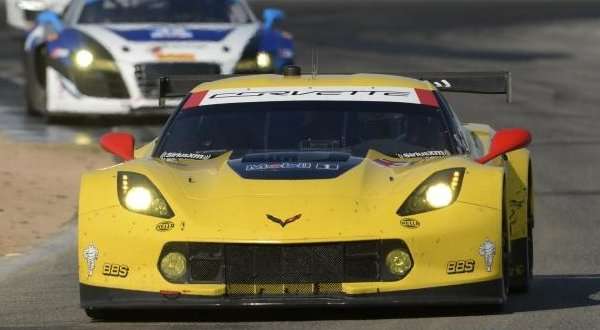 The biggest news in the world of Chevrolet Racing heading into the Rolex 24 at Daytona International Speedway was the new Chevrolet Corvette C7R race car that is based on the 2015 Corvette Z06. Having debuted just a few weeks earlier at the 2014 North American International Auto Show in Detroit, the Corvette C7R was poised and ready to attack the 24 hour race a Daytona to begin another championship season.

Things didn’t go as planned with mechanical problems forcing one C7R out of the race early (finishing 60th overall) while forcing the other to settle for a 5th place class finish, 16th overall. Things could have been worse, but the C7R teams and fans most certainly expected a stronger showing at the Rolex 24.

This past weekend, both new Chevrolet Corvette C7R race teams descended upon Sebring International Raceway for the annual winter testing session ahead of this year’s 12 Hours of Sebring with the hopes of improving on the Rolex 24 efforts.

Unfortunately, things once again didn’t go as well as the fans or teams would have hoped as the #3 Corvette C7R was the quicker of the two – and it was only the 4th quickest car in the GTLM class with a time of 2:00.580. That put the #3 Corvette a little over a second back of the class leading Porsche 911. The #4 Corvette C7R turned in a best lap time of 2:01, making it the slowest car in the GTLM class during winter Sebring testing.

Now I am sure that there are Corvette Racing fans reading this who are questioning me referring to a 4th place spot in practice as “struggling” but everyone should keep in mind that we are talking about a racing team who has been the most successful in the GT class over the past decade or so. For normal race teams with two cars, being the 4th fastest car in the class at the winter practice for the 12 Hours of Sebring would be a big success… but the Corvette C7R team isn’t a normal team. This is a championship team with championship caliber drivers so being the 4th fastest – and the slowest – car in the GTLM class is not a great result for the Corvette Racing crew.

I have no doubt that they will eventually hammer out all of the issues and we will see the #3 and #4 Corvette C7R drivers on the podium, but right now both cars are struggling.

The good news for GM, Chevrolet and Corvette racing fans is that the Corvette Daytona Prototype continues to dominate. After claiming each of the top 4 overall finishing positions at the Rolex 24, the Corvette DP teams came into Sebring winter testing with the hopes of continuing that momentum from Daytona – and they did just that. The #5 Action Express Corvette DP that claimed the Rolex 24 win was the fastest car in the winter practice, beating the next fastest car by almost three quarters of a second. The Action Express Corvette was the only car to run a lap quicker than 1:53 – with a top time of 1:52.480. The OAK Racing Nissan Morgan car was second quickest with a time of 1:53.204 and the #90 Spirit of Daytona Corvette DP was third with a time of 1:53.399.

The 12 Hours of Sebring race will take place on March 15th, starting at 10:30am EST.
Image: IMSA.com