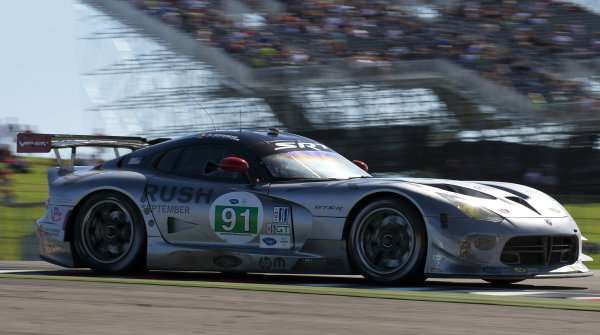 Although the SRT Viper GTS-R teams managed a best finish of 3rd place at the recent Rolex 24 at Daytona, the governing body of endurance racing has issued what they call a “Balance of Performance Adjustments” for the Viper teams that will limit their performance going forward with the 2014 season.
Advertisement

The SRT team had two Viper GTS-R race cars in the 2014 Rolex 24 hour race at Daytona International Speedway. After qualifying first and third, the Vipers were front runners early in the race before one ran into a technical problem and the other was involved in a crash. Remarkably, after going 16 laps down early in the race, the #91 Viper GTS-R was able to climb back within 4 laps of the leader and finish in the 3rd spot. The #93 Viper ran into some late issues and was forced to settle for 6th in the class, 26 laps back of the class winner. Even though both cars finished well off the lead pace and really weren’t in contention to win beyond the halfway point in the race, a third place finish was almost as good as a win for the SRT team.

After all, the #91 Viper made up 12 laps on the leader during the second half of the race or, in other words, the #91 Viper passed the car that won the GTLM class 12 times in the last 12 hours of the race – which serves to show just how good the new Viper endurance race car can be when the team doesn’t run into technical problems.

It turns out that IMSA, the governing body of the Rolex 24 and the rest of the endurance races in which the two SRT Viper GTS-R race cars will compete this year, thinks that the 2014 SRT Viper GTS-R performs a little too well and to resolve that issue, the sanctioning body has handed down what they call a “Balance of Performance Adjustment” to the Vipers. In the opinion of the minds at IMSA, these adjustments will level the playing field for the GTLM field for the next race and perhaps the rest of the season.

First of all, the SRT Viper GTS-R teams are now required to carry 15kg more weight in the cars (about 33 pounds) for a new minimum weight of 2756 pounds. Second, the Viper must run an air restrictor that is 0.3mm smaller. Finally, the fuel capacity of the Viper GTS-R has been reduced from 120 liters to 105 liters. In other words, the Vipers will be slightly heavier and slightly less powerful while also having less range between pit stops so they will need to make more stops during the race.

Considering that the SRT Viper GTS-R teams finished 3rd and 6th in their class and the best of the two was 4 laps behind the class winning pace, it is surprising that IMSA has decided to make so many adjustments before the 12 Hours of Sebring. Fortunately for SRT and their fans, the Vipers arent the only cars in the GTLM class to receive these new restrictions. The BMW teams will also gain 33 pounds while also losing 10 liters of fuel capacity. The Aston Martin Vantage race cars see their fuel level drop by 3 liters but these teams get a 0.3mm increase in their air restrictor so they will actually make more power. The other manufacturers including Porsche, Corvette and Ferrari all received reductions in fuel capacity as well so while the Viper is the car the most affected by these changes – they are not the only cars to be forced to sacrifice performance for the big race at Sebring.

LG's New EV Battery Plant Is a Welcome News for Tesla
Tesla Giga Berlin's New Hurdle: It's Not Only the Gov't, but Now Tesla Itself
END_OF_DOCUMENT_TOKEN_TO_BE_REPLACED