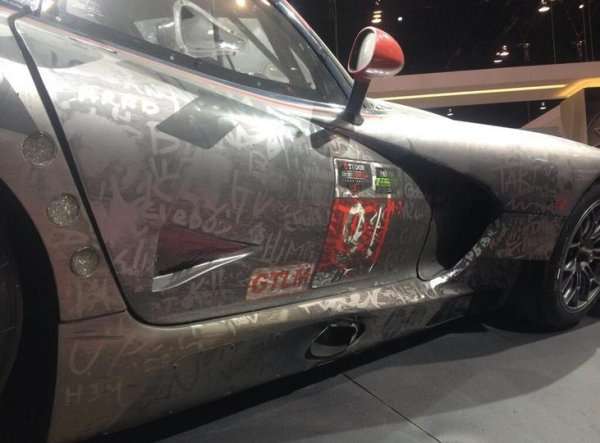 The #91 SRT Viper GTS-R was part of the SRT display at the 2014 Chicago Auto Show in the exact form that it finished complete with all of the grime that comes with a 24 hour long race, but sadly, some disrespectful show goers took it up themselves to desecrate the mighty Viper race car.
Advertisement

As you can probably imagine, a car gets pretty dirty during the course of a 24 hour long endurance race so after making through the entire Rolex 24 at Daytona International Speedway, the #91 SRT Viper GTS-R was pretty filthy. Parts of the car were so thickly covered with track grime that you could barely tell what color that portion of the Viper was intended to be so when you combine that unique black grime with the scuffs and scratches that come during the course of the race – the #91 Viper looked like it had been through a battle.

To some, that dirt is nothing more than dirt, but to gearheads, racing fans and anyone who appreciates this unique form of filth, the #91 SRT Viper GTS-R left the track as a piece of rolling artwork. Because there are so many people in the world who, like me, see all of that dirt as a thing of beauty, the Chrysler Group’s Street and Racing Technology brand wanted to take the #91 Viper race car exactly as it was when the race ended to show off at the Chicago Auto Show. They didn’t want to just show off the new SRT Viper GTS-R – they wanted to show of THE Viper that had made the return to the Rolex 24 and came away with a 3rd place finish. The car was to be left dirty to show just how much wear and tear a car faces while competing in a 24 hour race.

SRT went so far as to explain to the company shipping the Viper from Florida to Chicago that it wasn’t to be wiped off at all and the company took special precautions to ensure that Chicago show goers could see the Viper the same way that the crew did when it finished the Rolex 24.

Unfortunately, some of the people attending the 2014 Chicago Auto Show didn’t have the respect to keep their hands off of the car and they took it upon themselves to scribble in the dirt on the side of the car. The image shown above was posted to Twitter by endurance racer Ryan Lewis (@RyanLewisRacing) after the second day of the Windy City show and as you can see, people have written on almost every inch of the passenger’s side of the #91 Viper. Lewis proclaimed that “people suck” and after seeing his picture – I am inclined to agree. Judging by how much writing is on the side of the car, I would guess that a great many people in Chicago saw fit to deface the Viper GTS-R.

While this probably doesn’t seem like that big of a deal in the grand scheme of things, it should be pointed out that one of the original Team Oreca Dodge Viper GTS-R race cars that won races all over the world is currently on display and it is still as dinged and dirty as it was when it left the track for the final time. Actions like the ones taken by some of the attendees in Chicago are why so many cars are roped off and kept far enough away that the general public cannot even see into the car.

Actions like these gradually make auto shows less exciting for the rest of us when companies are less inclined to bring vehicles out while also being less and less willing to allow show goers access to the interior and such.

John Goreham wrote on February 12, 2014 - 4:52pm Permalink
Usually they rope off stuff they don't watch touched and even have a uniformed "rent-a-security guy" stand around. I respect your opinion, but I think it looks kinda cool. I wonder if SRT though of that.
Aaron Turpen wrote on February 13, 2014 - 3:25pm Permalink
Agreed. It's now an even more unique piece.
Parks McCants wrote on February 13, 2014 - 3:06pm Permalink
And I say: Wash the car next time. I'd rather admire the aspects of a pristine, show and race ready Viper, than stand there wondering what the road grime covers. Desecration? Give me a break. Man made, Billionaire's play toy. Nothing more.
Patrick Rall wrote on February 13, 2014 - 4:29pm Permalink
Im pretty sure that none of the SRT team drivers are millionaires....let alone billionaires.
Harry wrote on February 14, 2014 - 1:45pm Permalink
I work for a Le Mans team and I get a bit emotional when we clean all the grime off the car at the end of a race. It's part of a memory. Part of something you've achieved and lived through.
Barb L wrote on February 15, 2014 - 8:23am Permalink
Thank you for sharing that. I got to see this car at this show, and it nearly took my breath away... I couldn't believe other people didn't feel the same respect and awe, and when I saw someone right next to me reach out and touch it, I just about smacked him in the face. They should have roped it off better, but it's sad that that's necessary.
Roger Hertzel wrote on February 15, 2014 - 1:09pm Permalink
If you as a person do not have enough respect for other peoples property, to keep your hands to your self. Then you should stay home. Its no different than going to a museum and touching a price less painting or artifact. Thats just something you dont do. Its called common sense which most people dont have.
Warhawk wrote on February 16, 2014 - 10:52am Permalink
Ok, so we're talking here about the dirt on a car... dirt... I think the priorities are somewhat lost when this is causing uproar, and many other, more significant problems don't. Are people going to start selling brake dust in a can? I mean come on! Is brake dust on a car what auto racing is all about? Were they hoping to preserve the dust on that car forever? Is this not strange to anyone?