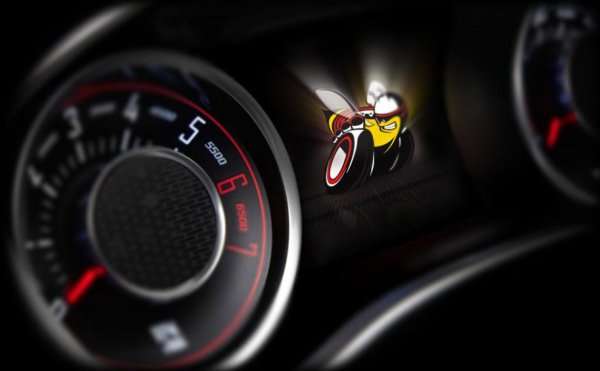 After months of expectations and speculation, the Chrysler Group has announced that the next generation Dodge Challenger and Dodge Charger will debut later this month at the 2014 New York International Auto Show.
Advertisement

Back at the 2013 New York International Auto Show, SRT boss Ralph Gilles talked briefly with Motor Trend about the future of the Dodge Challenger, hinting that we would see something special at the 2014 New York Auto Show. Turns out that Mr. Gilles wasn’t just getting our hopes up as the company has announced that they will introduce the all-new 2015 Dodge Challenger at the 2014 Big Apple show. We do not know for sure what to expect from the 2015 Dodge Challenger, but we know that it is all new and that it will pack the gauge cluster shown above.

More importantly to some, the 2015 Dodge Challenger will feature a “new powertrain combination” which will most likely include the new Hellcat Hemi. There have long been rumors of this new Hemi calling on the help of a supercharger to make power in excess of 600 horsepower. I would also expect some variation of the Pentastar V6 and at least one (if not two) “mid level” Hemi V8 engines between the Pentastar and the Hellcat. These engines will most likely be paired with the 6-speed manual transmission and the new 8-speed automatic transmission which - with those powerful engines – will most likely make the 2015 Challenger the more powerful than the 2014 models and more efficient.

It will be interesting to see how much the exterior design of the 2015 Dodge Challenger changes compared to the current models. Even though the Challenger really hasn’t been touched up much since being introduced for the 2008 model year, it has a look that is still loved by the Mopar Performance community. Because of that, I would expect the new Challenger to still be a big, bold muscle car with some new lines to allow it to stand apart from the current models. If nothing else, the image above would suggest that there will be some sort of Scat Pack variant…which might just be the Challenger that packs the new Hellcat Hemi.

As an added bonus, Dodge will also reveal the revamped Charger sedan in New York. This new Charger sounds like more of an exterior refresh than a whole new model, but with the promise of every single body panel being new and a “sleeker, more modern appearance”, the 2015 Charger should help to continue the dominance of the high performance 4-door sedan segment. It is unclear as to whether or not the 2015 Dodge Charger will receive any of the new powerplant options from the 2015 Dodge Challenger right away, but we can expect the 2015 Charger to feature variations of the current engine lineup including the base Pentastar V6, a mid level Hemi V8 (presumably the 5.7L) and the top of the line 6.4L SRT Hemi V8. I would expect that the Charger will eventually get the Hellcat Hemi – but I think that Chrysler will let the Challenger benefit from that monster supercharged powerplant for at least one model year.

The 2014 New York International Auto Show opens to the media on April 16th and the new Challenger and Charger will make their grand debuts on April 17th – the same day on which Ford will celebrate the 50th birthday of the mighty Mustang.