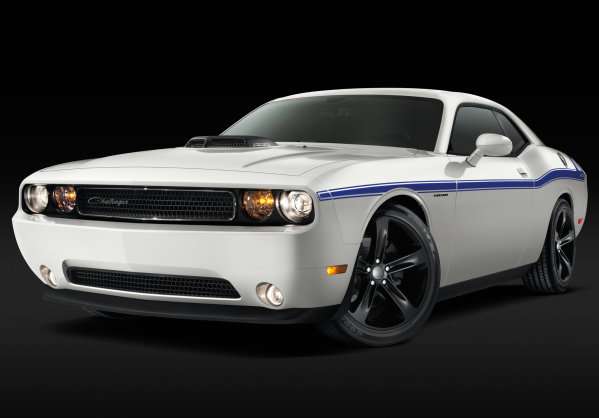 The Mopar 14 Dodge Challenger Sells Out in One Day

The customizable Mopar 14 version of the Dodge Challenger that was introduced at the 2013 SEMA Show in Las Vegas is completely sold out after just one day in the order bank – with all 100 units planned for production having been ordered and configured to the prospective owners’ tastes to create the rarest modern Challengers to date.
Advertisement

This combination of limited numbers and an incredible list of optional features made it very clear that the Mopar 14 Challenger would be a popular item as soon as it was announced at SEMA, but even Chrysler couldn’t have predicted interested like this. The Mopar 14 officially went on sale on April 1st and by midday on April 2nd, all 100 units had been ordered.

“The very high demand for the Mopar ’14 Challenger spotlights the success of our limited-edition, Mopar-modified vehicles, and also clearly demonstrates the passion our customers have for personalizing their rides,” said Pietro Gorlier, President and CEO of Mopar, Chrysler Group’s service, parts and customer-care brand. “Whether during or after the ordering process, Mopar is there to help put a personal touch on customers’ rides.”

Standard features of every Mopar 14 Dodge Challenger R/T included the awesome new Shaker hood scoop on top of the 5.7L Hemi, 20 inch gloss black wheels with Mopar center caps, a Black Vapor grille surround, a gloss black fuel door, a Satin Black decklid spoiler and the buyer’s choice of either Pitch Black or Bright White exterior paint along with three different exterior stripe packages. On the inside, all Mopar 14 Challengers feature premium leather seats with blue accent stitching and a blue Mopar M logo on the seatbacks, a serialized dash plaque and Mopar branded key fobs in addition to a unique owner’s kit with each car.

“The Mopar ’14 Challenger shows that when combining a legendary car like the Dodge Challenger R/T Shaker and making it even more exclusive, we create collectible performance machines unlike anything else on the road,” said Tim Kuniskis, President and CEO of Dodge Brand. “From the Mopar ’14 Challenger to the new Scat Pack performance stage kits available on Challenger, Charger and Dart, you can continue to expect great things when Dodge and Mopar team up.”

Of those 100 Mopar 14 Dodge Challenger R/T’s sold earlier this week, 52 of them were Pitch Black while the other 48 will be finished in the new Bright White. The “Shaker stripe” package was the most popular of the three striping options, followed by the body side decals and then the lower rocker stripe package. The most popular individual options were the Mopar hood pin package, Mopar Performance badges, quad exhaust tips, the Dodge Challenger monogrammed car cover and the Mopar Performance cat-back exhaust system. Some of the other items added to the Mopar 14 included a

If you had hoped to be one of the lucky owners of the Mopar 14 Dodge Challenger R/T, but you didn’t get your order turned in before all 100 were officially spoken for, fear not. Fortunately, every component of the Mopar 14 is available via the Mopar catalog so while it won’t carry the collectability of the actual Mopar 14 – any new Dodge Challenger R/T can be modified to look just like the 2014 Mopar branded muscle car.