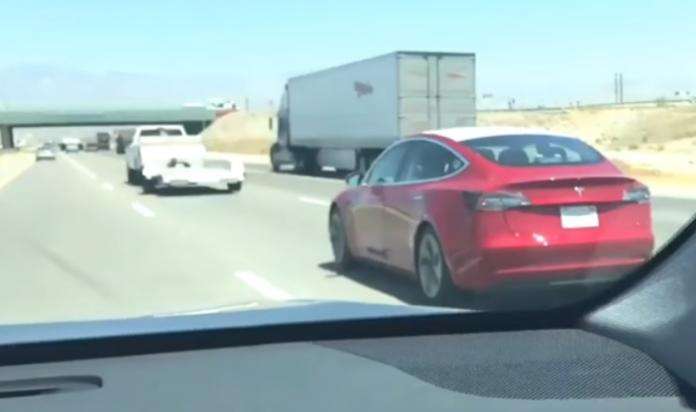 A new video of Tesla Model 3 that was uploaded on July 5th, shows the top covered raising number of questions as to what Tesla may be hiding on Model 3 roof. In my opinion it could be one of the three things.
Advertisement

First, let's take a look at this recent Tesla Model 3 video. It appears that it was filmed on the roads of California. A car that was passing it from the left side, filmed the Model 3, which appears to be either Red Multi-Coat or Signature Red color. More likely it's Red Multi-Coat color.

On the top of the Model 3 you can clearly see that the roof is covered. Is there anything that Tesla doesn't want us to see you and keeps the surprise for the July 28th event?

In my opinion it can be one of thee following three options. Or perhaps something else.

In the past one of the main causes of covering the roof was to hide the panoramic sunroof. This can be the case with Tesla Model 3. However, this is very obvious. I don't think Tesla would go for it just to hid a panoramic sunroof.

Tesla could be hiding neatly made solar panels on top of the Model 3. This makes more sense for two reasons. First, as you know Tesla is heavily invested in solar business, providing affordable solar roof prices. In May 2017 Tesla announced that its solar roof prices are cheaper than expected. Now, if a company can make and put solar roofs on residential houses, why can't it amaze its customers putting solar roofs on top of Model 3? It could be yet another additional source of energy for Tesla Model 3. Very innovative.

Putting a panoramic roof mixed with solar panels makes more sense for Tesla Model 3. It's useful and very innovative. You get the best of the both worlds. The driver gets a beautiful panormaic view, but also has see-through solar panels that get some energy from the car. This will be more surprising than the second option discussed in this story.

What are your thoughts? Why is Tesla covering its roof?

Update: I just saw this new tweet which shows Tesla Model 3 having a panoramic solar roof.

Everything you need to know about #teslamodel3 which is starting production todayhttps://t.co/sGJON7ZARG#autonomous #smartcity #AI #robot pic.twitter.com/5ejdhauavv