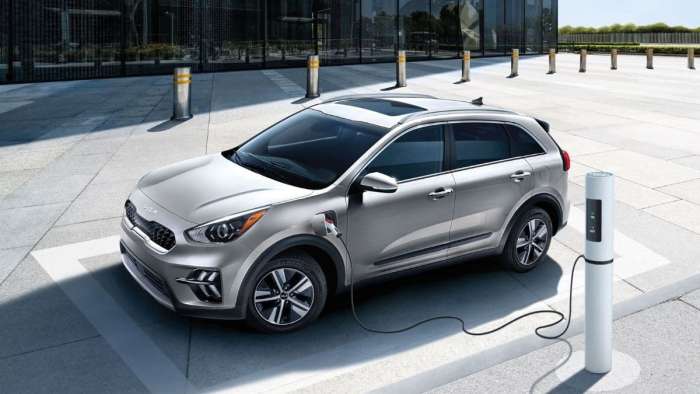 Kia has confirmed January 2022 sales figures for their entire lineup and though combined overall sales were down slightly compared to Jan 2021 figures, with 2,477 fewer units sold in January 2022, multiple models saw better sales this year. For the Kia Niro model line specifically, which includes only HEV, PHEV and BEV models, sales were up over 78% compared to January 2021.
Advertisement

According to Kia, the model that saw the biggest year-over-year increase was the new Carnival MPV (which replaced the Sedona minivan last year), with a nearly 108% increase. I’ll point out, however, that the Carnival was an all new model last year, so conclusions from sales figures for 2021 should be tempered accordingly. Otherwise, the Niro line saw the largest year-over-year increase, followed by the Stinger with nearly 43% increase, and the Sorento, which includes plug-in hybrid and HEV models, with nearly a 16% increase. All other models in Kia’s stable either saw single digit increases or sales declines. Notably absent from Kia’s January sales figures: the EV6. Perhaps it is understandable that, with the vehicle being brand new in the U.S. market, there were no January figures. Hopefully the EV6 will show up in February’s figures.

What might these first month’s sales figures tell us, besides the obvious changes? For the Carnival, it seems safe to say that people are beginning to take more notice of it and Kia is delivering more product to their dealers, however the Carnival is, so far, one of its lowest volume sellers. In fact, of all Kia’s models, only the Stinger sold fewer units than the Carnival last month. Perhaps that isn’t a big surprise though, as large family haulers (whether they are styled as minivans or more rugged SUV-ish vehicles) are a smaller market in the U.S. than the small to midsize SUV market.

The Niro, however, is in that more sizable market as a compact crossover SUV. The fact that the Niro is off to a much better start in terms of 2022 sales is a positive indicator, for certain, but only several more months of sales data will tell us if it is a trend or just a blip. Although, the recent acclaim that Niro scored from JDPower will certainly help sell more Niro’s. The dearth of competition for the Niro in its price point and vehicle class are also likely to support continued increase in demand (with Chevrolet’s Bolt unlikely to be offered in significant numbers this year due to prioritization of battery supply going to refurbish recalled Bolts). Add to this the introduction of a restyled 2023 Niro later this year, which might lead to lowered prices on remaining 2022 stock once the 2023 models become available, a hopeful lessening in global supply chain woes and semiconductor shortages, and I think the Niro line is likely to see a healthy increase in sales for 2022 as a whole.

What might January’s figures mean for Kia’s overall electrified vehicle sales for 2022, besides the Niro’s inspiring start? Kia’s other electrified 2022 vehicle models are the Sorento HEV and PHEV, and later this year will also include the 2023 Sportage HEV. As mentioned above, Sorento sales are almost 16% higher, so far. While break downs for Kia’s HEV and PHEV models aren’t always available, as I pointed out in a previous article Kia saw significant growth in its electrified vehicles sales in 2021 and wait times for the Sorento PHEV are typically months out according to my research on social media (so demand for whatever the supply is, is strong). It is also safe to assume that Kia’s PHEV sales for 2022 should increase, given 2022 is their targeted “peak” for PHEVs, as a percent of total sales, according to InsideEVs. Since there is a roughly identical increase in their sales goals for HEVs too, I would also expect more of the uptick in Sorento sales to be due to an increased number of HEV and PHEV sales. Thus, in what is likely the only month of 2022 sales for Kia that won’t include EV6 sales figures, I would use the figures for Niro and Sorento sales increases to be indicative of a conservative trend we may expect, overall, for Kia’s 2022 electrified vehicle sales, since the EV6 will likely be the most in demand plug-in vehicle Kia offers this year.

Tesla Contemplates A New Strategy for China Retail even As Sales Boom
Jay Leno on Elon Musk & EVs: “I Think He Should Get ... Credit"
END_OF_DOCUMENT_TOKEN_TO_BE_REPLACED