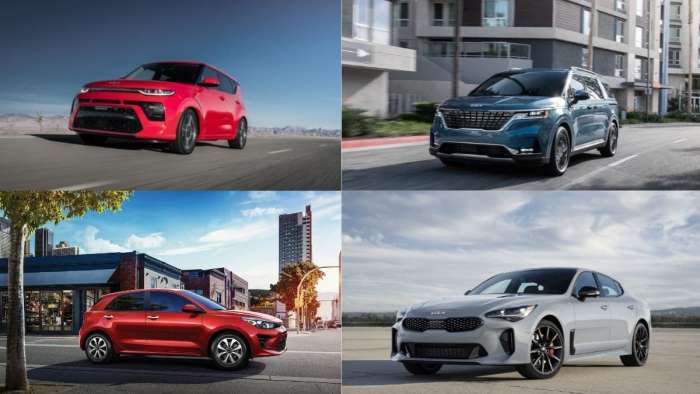 Kia Electrified: From the fringes, considering other Kia models’ near term electrification

Kia still sells sub $20k economy cars, a “minivan”, a performance sedan (seriously!), and a quirky tall wagon when other carmakers, for the most part, have abandoned these model types. Sure, Honda, Toyota, and Chrysler still sell minivans too; Mitsubishi, Nissan, and Chevy (at least) still sell under $20k economy cars, and there are other sports sedans and boxy/quirky models out there as well. But will Kia electrify any of these models anytime soon (or in the case of the Soul, “re-electrify”)?
Advertisement

Let’s start with the lowest priced vehicle. The Kia Rio subcompact car starts a little above $16k. It is one of Kia’s most fuel efficient cars and does not include any electrified options. It meets the basic transportation needs of many and is Kia’s 8th best selling vehicle in 2021, which means it is only selling above 3 other Kia models that are still in production for the U.S. market this year.

Might it get an electrified option in the next few years? I assume the answer is no, for a few reasons: the Rio is Kia’s entry level vehicle and is meant to be affordable. Making an HEV version would add a few thousand dollars, or more, to the price for minimal return in profit or fleet average fuel economy as it is already efficient. An EV version might also cannibalize sales from the (currently) even lower volume Niro. It could still be something Kia decides to do of course, but it doesn’t seem as likely, near term.

What about the boxy, subcompact crossover SUV, the Soul? It used to be offered in electric form in the U.S. (as the Soul EV), but no more. The Niro replaced it, basically, and now the EV version is only sold in markets outside of the U.S.

Might Kia decide to offer an HEV or PHEV version of the Soul? Not likely, I assume, in part because its EV version was sold here previously. Also, it may not be electrified because it is already one of Kia’s better selling vehicles (6th best in 2021) and also due to the same reasons mentioned above for the Rio: it might cannibalize sales (from the Niro), it would elevate the otherwise lower price point, and it is already a pretty fuel efficient vehicle. Perhaps a future generation will bring new electrified options, however. We’ll have to wait and see on that.

How about the all new rugged looking non-minivan minivan, the Carnival MPV? It seats up to 8, replaces the mild-mannered Sedona (which wasn’t selling particularly well in its segment, recently), and is one of Kia’s least efficient vehicles. Surely, as one of the vehicles dragging down Kia’s fleet fuel economy stats, it might benefit the most from electrified options.

An HEV option would make it competitive with the Toyota Sienna, potentially matching it in efficiency if not capability, depending on if it remained a FWD vehicle or not and got a more efficient 4 cylinder engine.

A PHEV option could compete with the only other PHEV minivan on the market, the Chrysler Pacifica Hybrid. And an EV Version of the Carnival would be in a class all its own: the 8 person full electric people mover class! The possibilities are intriguing, at least, and of all the models mentioned in this piece, the Carnival seems the most likely to be electrified soon.

Finally, what about the Kia Stinger? It is a bit of an anomaly, but makes sense when you consider that Kia does not have a performance or luxury oriented affiliate (like Honda has Acura, Toyota has Lexus, etc.). Might it see an electrified version in the next few years? Something tells me this isn’t likely, unless perhaps it is a performance oriented hybrid or plug-in hybrid. The Stinger is already fairly efficient as far as performance oriented sedans go. Adding additional horsepower and torque, without sacrificing efficiency and or enhancing it seems like the kind of thing younger American performance enthusiasts would be interested in. This is perhaps especially true when you consider cars like the Tesla Model 3 will outperform the Stinger in some metrics without the power and efficiency upgrades that electrified options bring.

Might a full EV version of the Stinger be in the works? I doubt that, given the EV6’s performance in its planned top trim level and or the performance we might anticipate from other EVs Kia will bring to market in the coming years. The Stinger is, I anticipate, more likely to see an HEV or PHEV version (if anything), if it sticks around more than another year or two. But I also wouldn’t be surprised to see it phased out in favor of fully electric performance models, eventually.

What do you think? Please share your comments below.