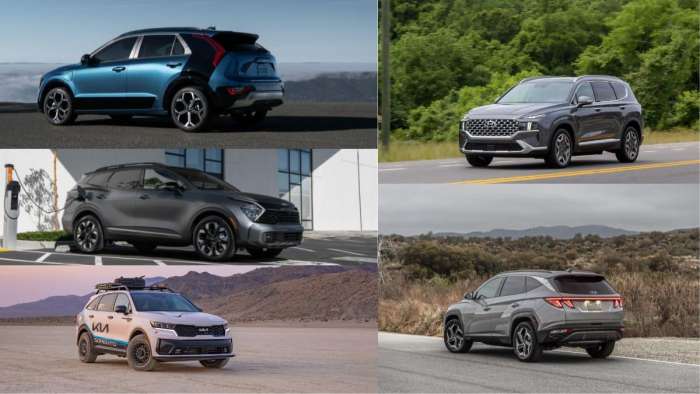 InsideEVs recently broke the news about the best selling plug-in hybrids (PHEVs) in the U.S. in 2022 so far. Surprisingly, the company selling the most PHEVs in the U.S. is Stellantis.
Advertisement

According to InsideEVs, The Jeep Wrangler 4xe is so far the best selling PHEV in the U.S. in 2022, selling 10,861 units through the first half of 2022 in the U.S. Compare this to the combined PHEV sales of Kia and Hyundai, which I recently reported on as offering the most SUV and crossover PHEVs under $50k, and Stellantis’ achievement seems at least modestly impressive. I estimate Kia and Hyundai’s combined U.S. PHEV sales for the first half of the year to be at least 8,000 - 9,000 PHEVs (which may be conservative), comprising the following models: Kia Niro PHEV, Kia Sorento PHEV, Hyundai Santa Fe PHEV, and the Hyundai Tuscon PHEV. Note that Kia is about to release the Sportage PHEV in the U.S. too, possibly in the current quarter, and that will likely mean larger PHEV sales figures for the closely tied South Korean companies for the second half of the year. Will it be enough to outpace Steallantis this year? That all depends of course, but as long as Kia can address their safety recalls promptly, and assuming Stellantis can’t ramp up sales any more than it has so far, Kia and Hyundai combined may wind up selling more PHEV SUVs than Stellanits by the end of the year. It may not be quite fair to make this suggestion because if that turns out to be the case it would certainly be due to the combined sales of multiple models on Kia and Hyundai’s part.

How impressed should we be by these figures for Stellantis and or Kia and Hyundai? Not very much is my answer. Why? Because Toyota sold over 27,000 Rav4 Prime PHEVs last year (not to mention almost as many Prius Prime PHEVs). This year, Toyota isn’t selling as many PHEVs though and we’re still feeling the effects of the pandemic induced supply chain problems, and more recently the fallout from the war in Ukraine. This means automakers are having a very difficult time delivering enough product to meet global demand. Add to this the increased number of options for PHEVs this year for consumers to choose from, and it isn’t too surprising that the sales numbers for any given PHEV model are less than plug-in enthusiasts might hope for.

What else might we take away from this news of Stellantis’ success with the Jeep Wrangler 4xe (and soon to be released Grand Cherokee 4xe)? The Wrangler 4xe is actually one of the least fuel efficient PHEVs anyone can buy in the U.S. (with only 21 miles of electric range, and then only 20 mpg on gas after that) as it has only a 49 MPGe rating. It is also one of the more expensive PHEV SUVs, even after the $7,500 federal tax credit is rolled in. It seems safe to assume that people are buying as many Wrangler PHEVs as they are because they like the rugged capability of the Jeep design. Are Kia and Hyundai (and Toyota as well) just missing the boat in terms of PHEV design? I would say definitely not. They simply have had too many issues with production and components and or cannot meet demand for their SUV PHEVs. If/when Kia and Hyundai are producing more PHEV SUVs, they may easily outsell Jeep, and or Toyota, in this vehicle niche since they offer more choices at lower prices.

If availability were not an issue, and all other pricing being whatever the manufacturer’s website indicates the vehicles should cost, which company’s PHEVs would you be most interested in? Please leave your comments and questions below.

Images provided by Kia and Hyundai.