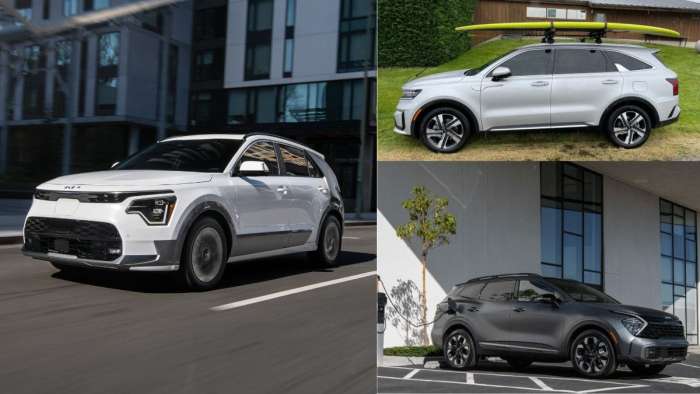 Kia Offers The Most Plug-In Hybrid SUVs And Crossovers For Under $50,000 MSRP

I am on vacation on the island of Kauai, visiting my auntie and uncle in Lihue. They both just retired from long careers as teachers here and are looking for their first plug-in vehicle. They want an SUV or crossover with a higher seating position with at least enough ground clearance to handle a rutted dirt road leading to a hike or beach somewhere on the island. They might be like any other car shopper looking for their first plug-in vehicle, so I decided to help them out with a little research.
Advertisement

I count at least 12 plug-in hybrids (PHEVs) and at least 15 electric vehicles (EVs) that can meet their stated price limit of $50,000 or less as long as we assume the vehicles will be sold at MSRP, including tax or other incentives, and also include vehicles that are supposed to be available to purchase at some point before the end of 2023. I realize that’s a lot of conditions, but they aren’t in a hurry and they are fully aware it could take some time for a vehicle they might order later this year or early next to be delivered. To be honest, this was a much longer list than I expected and I am intentionally including some vehicles that may not meet their other criteria (something compact - mid-size, preferably with all-wheel drive, etc.). I’ll sort this list alphabetically and focus on plug-in hybrids (PHEVs) for the first half of this story with a few important details for each that may be of help to someone also in search of a new plug-in at similar price points. Note, all of these PHEVs are currently eligible for federal tax rebates in the U.S., but Toyota’s eligibility is winding down and Ford’s will also begin winding down, likely at either the end of the year or by March 2023.

First up in the PHEV group: the midsize Audi Q5 TFSI PHEV SUV with a starting MSRP of $55,400 before any federal, state or local incentives. It has a 17.9 kWh battery, but an all electric range of only 23 miles (whereas vehicles from Kia, Hyundai, Ford and others have significantly greater electric range from smaller or similarly sized batteries). The Audi’s gas-only efficiency isn’t impressive either, at 26 mpg combined on gasoline (once the battery is depleted) for the current model, and 61 miles per gallon equivalent (MPGe). But Audi customers are more likely interested in the luxury, power or design of the Audi than its efficiency. Note Audi’s plug-in vehicles are all still eligible for the federal tax credit of up to $7,500 (depending on the size of the battery).

Next are the Ford Escape PHEV (MSRP $35,455), Hyundai Tucson PHEV (MSRP $35,400), and Hyundai Santa Fe PHEV ($40,000 MSRP). The Ford has 37 miles of all-electric range, the Tucson 32 miles and the Santa Fe 31. All 3 SUVs are still eligible for the federal tax credit, though Ford is likely to lose its eligibility first, possibly reaching its 200,000 unit cap that initiates the phase out of the credit for its vehicles later this year. The Santa Fe is the largest, most spacious and luxuriously equipped of the three at 6-7” longer and 1-2” taller than the others. Only the Hyundais have AWD (the Ford is FWD only, currently). They all have greater than 6” of ground clearance and the Ford gets 40 mpg combined (once the battery is depleted, and 105 MPGe), the Tucson 37-38 mpg (80 MPGe), and the Santa Fe 33 mpg (76 MPGe).

Jeep and Lincoln also offer PHEV SUVs that are technically under $50k if you qualify for the federal tax rebate. These are, respectively, the Wrangler 4xe ($54,595 MSRP) and the Corsair Grand Touring ($51,180 MSRP). However, the Jeep only has 21 miles of all-electric range and only gets 20 mpg once the battery is drained (and 49 MPGe). The Corsair has a slightly more useful 28 miles of all-electric range and 33 mpg (and 78 MPGe) and both have over 7” of ground clearance (the Jeep, with its off road bonafides, has the most impressive clearance of all the PHEVs at 10.8”). Still, unless one favors the more rugged off road capability the Jeep offers, or the pampering luxury of the Lincoln, neither of these PHEVs are as efficient or capable of all-electric driving and may be better suited to niche shoppers seeking the specific strengths each offers.

Kia offers more PHEV SUVs and crossovers, under $50k MSRP, than any other brand in the U.S. with a total of 3. Those 3 are: the Kia Niro PHEV ($25,590), the Kia Sorento PHEV ($45,190), and the Kia Sportage PHEV ($35,500 estimated). If you’re following closely, you’ll see Kia’s prices for these vehicles are quite competitive, making Kia a strong value proposition for those sensitive to price, especially for the larger 3 row Sorento SUV or the sub compact Niro crossover. Kia’s PHEVs are quite efficient and offer competitive electric-only driving ranges, with the FWD only 2023 Niro PHEV leading the stable at 33 miles of electric-only range from an 11.1 kWh battery (which means its federal tax rebate will be smaller than the other Kia PHEVs with larger batteries) and an estimated 48 mpg (or better), once the battery is depleted. The Sorento and Sportage PHEVs both get 32 miles of electric only range, which makes sense as they are built on the same platform and the Sportage is only slightly smaller than the Sorento, but if you don’t need the third row seats the Sportage gets better mpg (37 estimated vs. 34, combined) when the battery is depleted and can recharge its batteries from a 240V supply about 2x faster than the 2022 Sorento PHEV. The MPGe figures for each are also similar at 79 MPGe for the Sorento and 81 MPGe estimated for the Sportage.

Finally we come to the last batch of PHEV SUVs, 1 each from 3 different makers. First, Mitsubishi is set to offer a freshly redesigned PHEV in the 2023 Outlander ($38,000 estimated) which should be capable of 35-40 miles of electric only range and will likely get at least marginally better fuel economy from its gas engine (which for the 2022 model gets 26 mpg, and 74 MPGe) when it goes on sale later this year. The 2023 Outlander PHEV offers a third row as well (the Sorento PHEV being the only other option under $50k with this feature) and comes with standard AWD as do most, but not all, of the other vehicles covered in this article. Next, Toyota’s AWD Rav4 Prime ($39,800 MSRP) offers 42 miles of electric only range from its 18.1 kWh battery, and 38 mpg once its battery has been drained (94 MPGe). The Rav4 Prime is currently eligible for the full $7,500 U.S. federal tax credit, however that will soon change as Toyota hit its 200,000 unit limit last month and at the end of the current calendar quarter it will be cut in half, and then halved again early next year, until it ends entirely on October 1st, 2023. Finally, Volvo has 1 offering too starting at $51,700 the XC60 T8 Recharge PHEV. The Volvo offers 35 miles of all electric driving from its 18.7 kWh battery and about 27 mpg combined after depleting it (63 MPGe). Of course it is more luxurious and happens to be the most powerful and quickest SUV in this list, too.

Are you in the market for a plug-in hybrid SUV or crossover that may be slightly above the average price for a new vehicle? Which of these, if any, might appeal to you, and why? Take a look at the table below for comparative info on prices, EV range, fuel efficiency and tax credits that are currently in effect. 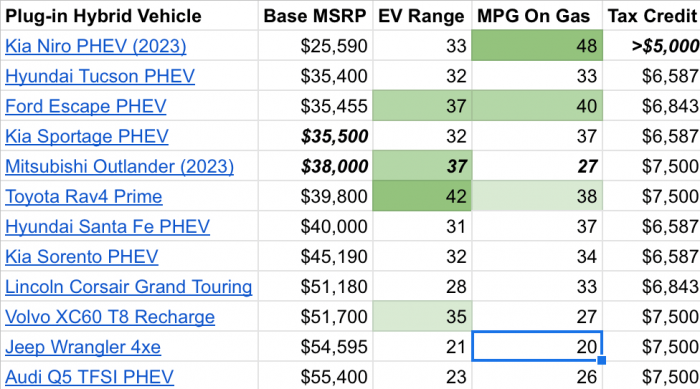