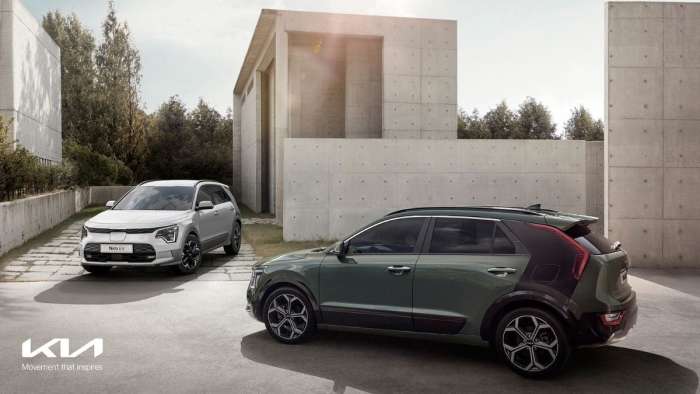 On Kia’s Swedish website some interesting information has been revealed about the forthcoming 2023 Kia Niro Plug-in Hybrid (PHEV). Turns out, it will be getting a larger battery and a more powerful electric motor than the current 2022 model too (along with a completely restyled body that is slightly larger and more striking in appearance). This is more than a little bit surprising.
Advertisement

According to InsideEVs, Kia Sweden has revealed that the 2023 Niro PHEV will have an 11.1 kWh battery (up from 8.9 kWh) which should mean it will be capable of 30+ miles of EV range on a charge (I’ll guess 32 on the EPA cycle, to match its Sorento and Sportage kin). The 2023 Niro PHEV also gets a 62 kW (80 hp) electric motor (up from 59 kW and 60 hp). In total the 2023 Niro is said to have 183 hp compared to 139 hp in the current 2022 model. That seems to indicate an increase in the gasoline motor’s output of about 24 hp as well. Other sources have also suggested the 2023 Niro will get a small boost to its gasoline engine efficiency, the proverbial icing on the cake as it were. Autoblog.com estimates about a 4% improvement, or about 2 mpg better, which translates to around 48 mpg, on average, which places it at or near the top of the list for most fuel efficient PHEVs on the market today. All of this is in addition to growing slightly in proportions compared to the current model (at 2.5 inches longer, .8 inches wider, and .4 inches taller) to give drivers a little more space for people and stuff. Who wouldn’t appreciate that?

This increased battery size and EV range may mean greater incentives from U.S. state and federal governments too (for those based on battery size in kWh or on EV range), meaning the 2023 Niro may end up being cheaper, after the increased incentives are factored in. This depends of course, and assumes that Kia doesn’t raise the price much and that dealers don’t mark-up the vehicles (which is quite common these days). That is certainly good news for those who may be considering the Niro, Kia’s lowest price PHEV, EV and HEV model. This news may also interest current or previous owners or fans of the Kia Soul EV (which is no longer on sale in the U.S.) since it means the Niro will have more internal volume than the Soul EV had or the gas only models have (assuming they aren't being revised for 2023). As such, it could be a more attractive option for anyone that may be looking to move from the shorter range Soul EV, or into a small, electrified SUV in one of the Niro EV or hybrid models.

All of these changes should set Kia up well to compete against any other compact or subcompact electrified SUVs, like the Honda CRV or the forthcoming Toyota Corolla Cross Hybrid or possibly, a plug-in hybrid version of the same vehicle. Considering that Toyota may begin running out of the plug-in vehicle tax credit this year, while Kia will not, Kia may enjoy a distinct price advantage over some of its primary rivals for a few years as well. With all these updates, the only thing that may (still) be missing from the Kia Niro model line is an option for AWD.

What do you think? Would these changes to next year’s model increase your interest in or likelihood of purchasing a Kia Niro? Leave your comments below.

john janssen wrote on March 21, 2022 - 10:35am Permalink
Yes if these changes are true i am in for a new 2023 Niro phev. I just hope the price is still nice like the 2022
JustinHart wrote on March 21, 2022 - 4:02pm Permalink
As far as I have read, Kia does not plan to raise price much, if at all. However, with the various crisis in the world, the cost and availabilities of materials going up, I wouldn’t be surprised if there is not at least a small increase in price for the 2023 version. Fingers crossed!
Ron Smart wrote on March 26, 2022 - 9:59am Permalink
I wonder if the 2022 Niro PHEV could fit the larger 2023 battery? I’m also a little worried that fully charging my Niro every day is eventually going to ruin the battery. Any advice on that? Thanks!
JustinHart wrote on March 26, 2022 - 2:26pm Permalink
I am not sure about the 2022 being able to fit the larger battery, but would assume no as the dimensions of the 2023 (at least the body) are larger/different. Re: charging every day don’t worry about that. Plug-in hybrids don’t let you access 100% of the battery anyway, and if you are driving it daily more than a few miles you should probably just charge it every day. What actually degrades your battery fastest are: exposure to prolonged and repeated high temps which you might worry about if you live in a place like Phoenix, AZ and have to park outside in full sun all the time, but note this is more of an issue for cars that lack active thermal management like the Nissan LEAF, and I believe the Niro PHEV uses air conditioning to keep battery cool so probably isn’t an issue for the Niro even in a hot environment. Rapid charging at 480v stations can also speed up degradation but the Niro PHEV and most other PHEVs can’t charge at that rate anyway. So you shouldn’t have to worry about daily charging at all. The propulsion battery in the Niro PHEV is meant to last the life of the warranty at a minimum (10 years/100,000 miles) and very likely can last much longer. I see reports of other PHEVs with 200-400k miles on their battery packs fairly often and it is not unreasonable to think the Niro PHEV propulsion battery would last similarly (noting that over time some degradation will occur regardless of miles driven/usage, but at least 10 years at a minimum and most likely 12-15 os my best guess). The older PHEVs on the road are the 2011 Chevy Volts, and some have needed batteries replaced, and that is perhaps the best comparison to be made, longevity wise, as the Niro PHEV has only been around for about 4.5 years and has had few if any battery replacements under warranty.