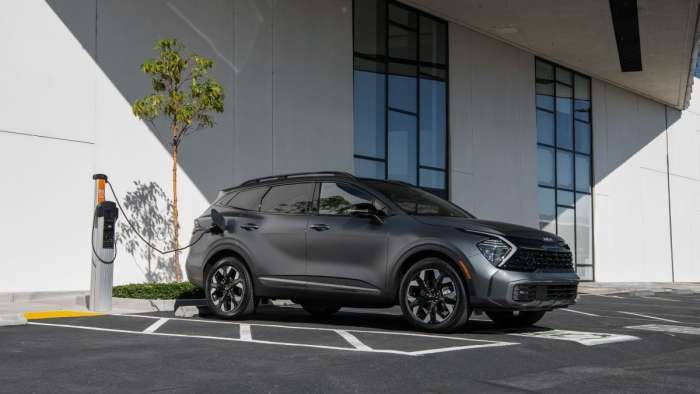 Kia Announces 2023 Sportage PHEV For The U.S. Market For Q3

Those features on the 2023 Kia Sportage include a 7.2 kW high-efficiency on-board charger which reduces the time it takes to fully recharge the identically sized 13.8 kWh battery to about 2 hours, compared to around 4 hours for the Sorento PHEV. This might be an attractive feature for drivers with an opportunity to recharge during a day full of errands or for those that rely on public charging infrastructure to keep their PHEVs operating at peak efficiency. In an informal poll of a handful of Sorento PHEV owners I did on social media though, it isn’t a feature that many would pay extra for. As such, it is interesting that Kia chose to include this feature on its lower priced Sportage and may suggest that the faster charger will be coming to the more expensive Sorento, at least as an option, eventually. Otherwise, with a PHEV being meant to be charged once to a couple times per day, typically, even the slower 3.x kW level 2 charge rate commonly available on PHEVs is adequate for someone to cover 30-60+ miles of driving each day with a charging stop of a few hours or more in the middle. Certainly, that won’t be enough for every driver on every occasion, but PHEVs aren’t meant to be 100% electric, either. So Kia’s choice is interesting and hopefully it leads to customers having options for a faster recharge time in the future.

Another option, or rather set of options, that is unique to the Sportage PHEV is the trim package. For the Sorento PHEV, in the U.S., the only trim packages are the top two most luxury oriented versions, the SX and SX-P. For the Sportage PHEV the two trim options are the more “sporty and rugged” X-Line and X-Line Prestige trims that include unique front and rear bumpers, side mirror, a roof rack, window surrounds and gloss black alloy wheels. In both models, the PHEVs represent the more expensive trims, which makes sense given the additional costs of the plug-in powertrain and the limited supply of batteries each requires. But still, it is something of a disappointment that lower priced trims won’t be available for those that might need or want them in the U.S., initially. Undoubtedly, Kia is being very strategic about pricing and trims offered for their PHEVs based on each market. Regardless, there is at least small comfort knowing that the Kia and Hyundai compact SUV PHEVs will be or still are some of the lowest priced options in the U.S., especially considering their more robust (and standard) AWD systems.

As positive as the news of another ultra efficient plug-in vehicle is, the Sportage PHEV may represent the last new PHEV model (or one of the last) that Kia will offer in the U.S. This is because, as InsideEVs explained, now through the next couple years is Kia’s planned “peak” timeframe for PHEVs. Perhaps Kia will offer another PHEV model or two besides the Niro, Sorento and Sportage, maybe a Telluride or Carnival for instance, but it seems less likely to me given the volume described in the InsideEVs piece and the sales volume of the three PHEVs Kia will offer in the U.S. by late this year. Between the 3 I imagine Kia could easily sell about ⅓ of their total estimated PHEV production in the U.S. alone, nevermind Europe and Asian markets. From this plateau Kia will gradually offer fewer PHEVs and more BEVs and HEVs as the decade passes, apparently. That isn’t a bad thing, per se, given the investments the U.S. government and private sector are making in EV charging infrastructure, which will make it easier for people to switch to fully electric vehicles.
Are you interested in the Sportage PHEV? If so, what might be more appealing about it than Kia’s other PHEVs? Leave your comments and questions below.