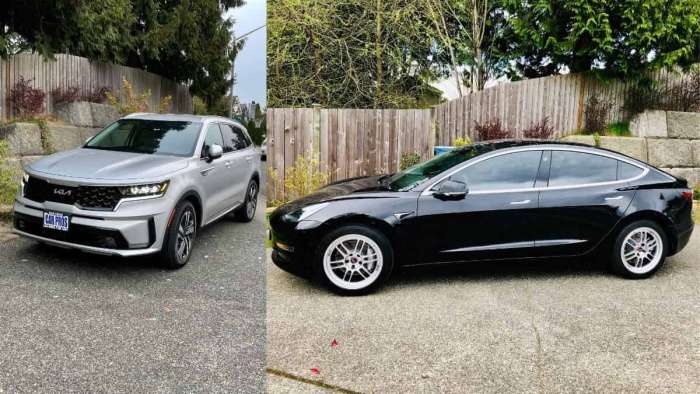 Like any good fuel efficiency data nerd, I keep my own record of my vehicles’ energy use, be that from electricity or gasoline. I own both a 2022 Kia Sorento AWD Plug-In Hybrid (PHEV) and a RWD 2018 Tesla Model 3 Long Range and I have approximately 800 miles worth of mixed use data regarding the efficiency of my Kia Sorento PHEV. Comparing information about the two vehicles’ respective efficiency has revealed something quite interesting.
Advertisement

My Kia Sorento PHEV, at least in the colder part of the year, is almost as efficient on battery only power as my Tesla Model 3 and I think I know why. I believe it is because the Tesla must use its battery pack to provide heat for the cabin. The Kia Sorento uses its gas engine to provide cabin heat (though it does draw electricity from the hybrid battery to heat the seats and steering wheel). According to a Kia corporate spokesman:

Kia’s plug-in vehicles – including Sorento PHEV, EV6, and Niro EV and PHEV - use a separate high-voltage battery heating and cooling circuit that is specifically engineered to manage the high-voltage battery’s temperature. For the PHEVs, considering their smaller battery size versus our EVs, the size of the battery heating/cooling circuit is unlikely to provide sufficient heat needed to properly heat the car’s cabin. Therefore, for PHEVs, heat generated from the I.C.E. is used to heat the cabin.

Providing heat to the cabin via electric heating powered by the drive battery would also lower winter range and or mean a larger battery would be needed to provide the same range, increasing the cost and weight of the (already heavy) vehicle.

Here’s some numbers for you to consider: Over 795 miles, I have consumed approximately 7.23 gallons of gasoline and 166.1 kWh of electricity. Approximately 557 of those miles, about 70% of the total, were covered by electricity with an estimated average of 3.46 miles per kWh. All of these miles were driven between late Sep and the end of January in the greater Seattle, WA area which means the weather ranged between the low 70’s and mid 20’s F, and averaged over the 5 months to be just under 50F. In case you didn’t know, that average temperature is less than optimal for batteries (they like to be warm too, around 70F is perfect). Even though my driving was limited by the destructive act of some desperate person that smashed out one of my rear passenger windows two weeks after I bought my Sorento PHEV, I expect a little less than 70% of miles on electricity is close to the average I’ll see long term (owing to my slight bias toward warm season road trips). I say this because of my previous experience with another PHEV, the Chevy Volt, in which I was able to achieve approximately 87% of the 35,000+ miles I drove on electricity, and because I anticipate a similar usage pattern. Note, I averaged about 53 miles of range from a full charge in my Chevy Volt (what it is rated for actually), whereas in my Sorento PHEV, I am averaging slightly over 40 miles of range per charge, or more than 8 miles better than it is rated for, in the colder half of the year!

A couple other things to note before I share my Tesla figures for comparison: I live in a suburb of Seattle, a city with some of the worst traffic in the U.S. In my Chevy Volt I covered at least 60% of my total miles on the freeway, yet my cumulative average speed after over 35,000 miles was only 27 mph (according to the display when I traded it in). I also tend to drive gently most of the time, often because traffic is so bad, but I would not describe myself as a hypermiler. And for those that might be curious, if I divide the total number of miles driven in my Sorento PHEV by the gallons of gas I have used so far (pretending that my mpg figure doesn’t actually include the portion of miles driven on electricity only), I am getting approximately 110 mpg.

In the same period of time, I drove my Model 3 about 1,650 miles (which is on the low side due to a long vacation out of state without it, and due to ongoing lack of work commutes). To cover that distance I used approximately 447 kWh of electricity, for an approximate miles per kWh figure of 3.69. That means my Model 3 was not even 7% more efficient than my Sorento PHEV, on electricity! A couple major caveats need to be pointed out however: I had less efficient/higher friction snow tires on my Model 3 the last 200 or so miles of that total and I do tend to drive my Model 3 with a heavier foot (as does my wife; oh how we love all that torque!). Also, I know that my cumulative efficiency in the Model 3 after over 32,000 miles is 4.15 miles per kWh, and the best averaged efficiency I have recorded for any month is 5 miles per kWh. If the difference between warm and cold season efficiency follows a similar pattern for my Sorento PHEV, the difference in efficiency in electrical consumption, overall, between the two vehicles will work out to be closer to 10%. Thus, I am extremely impressed that I am able to get such excellent all electric range and efficiency from my Sorento PHEV; well done Kia! Always remember, your mileage may vary. Just curious, if you drive a PHEV, and especially a mid-size SUV PHEV, what kind of electric only efficiency and or overall mpg figures are you seeing?