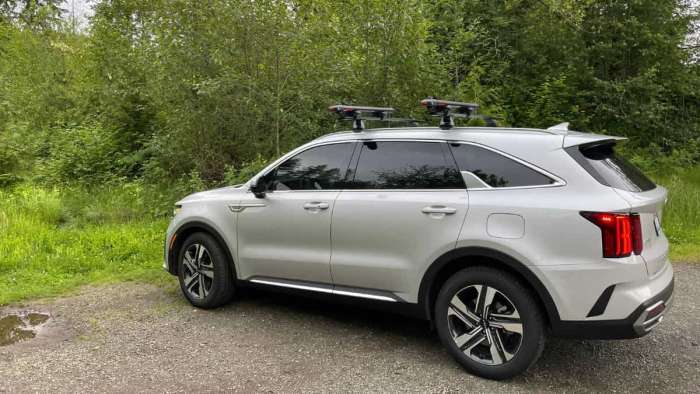 The other day I revisited a battery only driving range test in my 2022 Kia Sorento plug-in hybrid (PHEV). This time through the test, I drove as hard as I could without forcing the Sorento out of its battery-only EV mode and compared my range to my previous test in which I drove as gently as possible to try and achieve maximum EV range.
Advertisement

Here’s what was different about this test versus the last one: I kept the “tach” needle as close as I could to the edge of the “Eco” range as often as I could up to about 5 mph over the speed limit. In one or two moments I very briefly passed the last peg and broke into the “Power” band, but never to the second peg in that range which would have forced the gas engine to fire up. One other difference that may have skewed the results slightly: this time through the test I had an additional 200 lbs of people in my vehicle. Otherwise, just like last time I was driving on rural 2-lane roads that had a maximum speed limit of 45 mph, which means 50 mph was the fastest speed I was driving for this test that is meant to mimic suburban or rural errand running and or leisure pursuits like driving to a hiking trail. The weather was very similar, on the cool side in the upper 50’s Fahrenheit. There was no wind to speak of, nor any significant precipitation, just another mild “Junuary” day in the Seattle area. I also still had my roof racks and stand-up paddle board mounts on my roof. 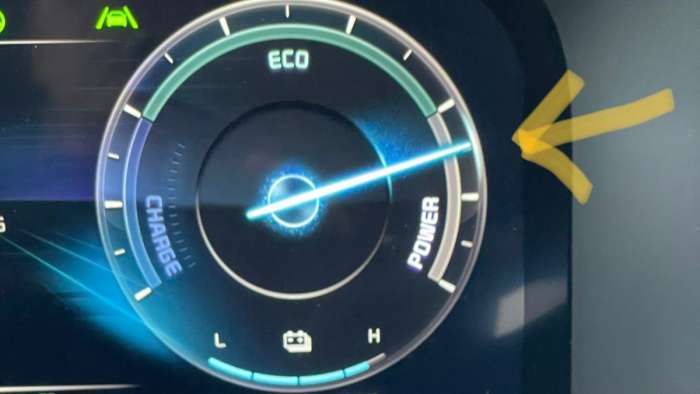 How did these two changes of harder acceleration and more weight affect the EV range of my Sorento PHEV? First, let’s be honest here, the electric motor in the Sorento PHEV only has about 90 horsepower. Even pushing that motor to its limit is not going to produce what we might call fast acceleration for a vehicle weighing north of 4,500 lbs. At its maximum output, it produces… perfectly adequate acceleration, one might say. But it logically follows that the more throttle you apply, the faster the electric motor will draw down the remaining charge in the hybrid battery. That certainly proved to be true in this test, too. Second, though the addition of two more people to my vehicle added more weight, given the results of the second test, I believe it was not the main reason my range decreased. I say this because 200 additional pounds is not terribly significant in a vehicle of this size and weight. At most, I would attribute about one third of the decreased range to the additional weight of my passengers.

At this point, you may be asking when the heck is this guy going to tell us how much worse his EV range was? Patience is a virtue, my mother never said to me (though I kind of wish she had). The answer is… are you really ready? OK, fine, the answer is less than 3 miles difference. Yes, that’s it! Less than 10% EV range was lost when I drove my Sorento PHEV harder and with 200 extra lbs in it, for a total range of a little less than 38 miles (from a vehicle that is EPA rated for 32 miles of EV range). Were you expecting more loss? Were you expecting less? I was expecting more. In fact I figured I would just barely exceed the EPA rated range by a mile or two. Perhaps what I need to do next is to do a higher speed range test almost exclusively on the freeway. I expect driving in those conditions will result in ranges closer to the EPA rating due to the increased aerodynamic drag from higher speeds.

What do you think? Are you surprised that driving the Sorento PHEV harder still returns better than rated range? For the record, I believe Kia may have intentionally opted for a less powerful electric motor in order to encourage people that care more about fuel efficiency to drive a little more gently. If this vehicle had twice as much horsepower on tap for the electric motor, it would be easier to use up the EV range faster (not to mention it might require a larger battery or more capable battery cooling system).

Please leave any comments or questions below.