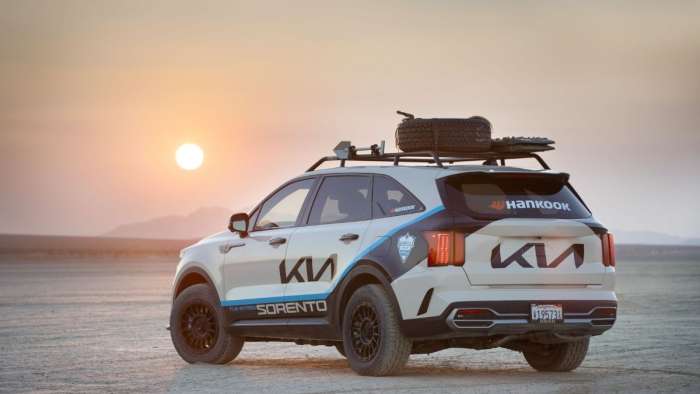 Love Anyway: A Response to Car and Driver's Review of the 2022 Kia Sorento PHEV

Let me be direct, I love Car and Driver because, as a magazine, the writing and editorial skills of its staff are second to none. These folks can write (even better than they can drive, I dare say), and Ezra Dyer who penned a recent review of the 2022 Kia Sorento PHEV, is certainly no exception. But I think he has missed the mark, a little, when it comes to his conclusions in reviewing the Sorento PHEV.
Advertisement

Maybe the disconnect I detect is due to something as simple as Car and Driver’s mission: irreverence. The magazine seeks to influence what we drive, and why, by focusing on what interests and excites us about driving and cars. Or maybe C&D’s staff have sold their collective souls to the Muses for a wallet full of no-limit Shell credit cards and a truck load of Porsche 911 GTs. It’s the former, I’m certain, but in his recent review of the Sorento PHEV, Mr. Dyer doesn’t mince words and puts his critique right in the headline, it “needs more motor”. Honestly, I can’t say he’s wrong, but I can say: he’s doing it wrong.

It’s probably obvious, but plug-in hybrid vehicles are generally designed to limit their use of gasoline. I think it’s even fair to say that how much a plug-in hybrid limits the use of gasoline is also what defines its “performance” as a vehicle optimized for efficiency. No matter how fun, or funny, hooning a 3 row plug-in hybrid SUV may be, it isn’t going to turn out well. It would be like watching your parents slow dance to a Howard Jones love song, starting out slow and awkward, and then leisurely going south from there. Not that Mr. Dyer and Co. were hooning their Sorento PHEV mind you (that’s what the Yugo he referred to was for, wasn’t it?). But you might say their testing is to blame for the less than stellar results.

When I say C&D’s testing is to blame, that’s yet another thinly veiled Howard Jones reference (there were always people wearing veils in his videos, weren’t there?). What I really mean is that C&D’s testing, as real-world and appropriate as it may be, is biased toward 75 MPH long distance freeway driving (because what American doesn’t like road trips?). There’s absolutely nothing wrong with that. I appreciate that C&D does their testing like this since many people drive that way. However, it completely misses the mark when it comes to the standard use cases a car like the Sorento plug-in hybrid is designed to excel at: mostly shorter distance, lower speed and or stop and go people moving for urban and suburban drivers.

In one of my favorite parts of his review, Ezra wrote “the whole point of a plug-in hybrid is to use it as an EV as much as possible, but in EV mode the Sorento's power-to-weight ratio makes a Yugo look like a Ferrari SF90 Stradale.” The Sorento PHEV only makes 90 hp from its electric motor, which isn’t optimal for rapid acceleration in EV mode. For example, yesterday I was accelerating up a ¼ mile long hill to merge onto the 405 in the Seattle suburbs where I live. I was able to do that without the gas motor kicking in, but it was a leisurely endeavor and took the full ¼ mile stretch to get up to speed (only a little over 50 MPH given the traffic). Soul stirring it wasn’t, but it doesn’t require patience as much as practice to keep the gas engine off (possibly an annoying amount of practice, but still). Ezra is right about the point of PHEVs, but he misses the connection between the way one drives them and the achievement of their purpose. As a former Chevy Volt owner, I feel it would have been better if Kia made their PHEV operate like Chevy did with the Volt and allow it to use the entire input range of the accelerator under electric power. It would have been easier to achieve that purpose by doing so. Kia’s rationale for not doing this might include cost (more robust thermal management may have been needed in that case) or weight (same reason). It would be great if we could get Kia to comment on their design choice actually. What do you think, Ezra? I bet Kia would be more interested in talking with C&D about this, but I’ll go ahead and ask em if you don’t.

Later in his piece, Mr Dyer wrote “With its battery charged, the Sorento often ignored its own electric capability and kept the 1.6-liter four humming. Maybe this was because most of our testing took place during cold weather—and it seemed like the only way for it to generate significant cabin heat is to run the engine…”. I got this for you Ezra. Kia confirmed that they intentionally designed their PHEVs to only use the gas engine to provide cabin heat. As counterproductive as that might seem, it isn’t actually very efficient or ecological to use a battery and electric heating unit to provide cabin heat when already lugging around a contraption that excels at wasting energy as heat and gallons of liquid fuel enabling it to do so. One reason you got disappointing fuel economy results Ezra, was due to using the cabin heater. Obviously, that isn’t something one has a choice about in a place with real winter, but in warmer temperatures, I propose your results would have been better. Are you up for a revisit, come May?

Finally, I’d like to share my own long distance driving efficiency results as a comparison to C&D’s average of 26 MPGe. Over the last roughly 300 miles, my MPG average is 72.6. This includes more than 200 miles of freeway driving. In case Car and Driver finds this hard to believe, I describe the longest portion of those 300 or so miles in a two part article: see part 1 and part 2. In the 100 or so miles of driving since, I have covered 90% of those miles in EV mode. That, combined with a slower steady state speed on the freeway, dictated by speed limit and heavy traffic in places, is how I was able to get such lofty fuel efficiency. In practical terms, and contrary to what Mr. Dyer wrote, one can get better performance or efficiency by not engaging EV mode once cruising speed has been attained in the Sorento PHEV. Rather, the EV mode is best used when traveling at speeds under 50 MPH, period. It is better to use it to accelerate, gently if possible, up to freeway speeds before switching to HEV mode and then manually toggling between HEV and EV modes as conditions or speeds warrant. If Mr. Dyer or Car & Driver would ever like my help in designing a new PHEV specific test, I’d be happy to oblige. But in the meantime, Car and Driver I say love is letting people be just what they want to be… keep up the good work!

circuitsmith wrote on March 1, 2022 - 1:26pm Permalink
I bet very, very few of C&D readers are in the market for a PHEV SUV anyway, so no harm done.
JustinHart wrote on March 2, 2022 - 12:46am Permalink
Very good point circuitsmith! Not unless it has 400+ hp anyway… ;)
Alan Litz wrote on March 5, 2022 - 9:18pm Permalink
Mr. Hart, First I have to say that it was your positive comments about the Sorento PHEV that alleviated my buyer's order remorse and made me feel good about my decision. Secondly, I finally got my PHEV, albeit not the one I originally ordered and I have to say that I too was a little taken aback by C & D's review. I whole heartedly agree with your assessment. I ended up buying one from a dealer 250 miles from my home who agreed to drive it to me, meet my order car's price and drive off with my trade. The salesperson apparently didn't want to waste any time on the transaction, so when it got to me, it was showing 28 mpg. I drove it home and charged it over night to a full charge and the next day, I filled it with gas, and proceeded to drive it to and from work (4.6 m) daily. Aside from a couple of times when I let it get below a 20% charge and it went into HEV mode and a few cold mornings with the heater running, I have managed to get it up to 67.5 mpg and still rising while only using a half a tank of gas in 375 miles. I expect to check all my numbers when I get down to 1/4 tank and fill it up, but I fully expect to reach the advertised 79 mpg and have over a 500 mile range. Your article again raised my spirits and answered about the only negative article I have seen on the web. Thanks Alan Litz
Justin Hart wrote on March 6, 2022 - 8:55pm Permalink
You’re most welcome Alan! Kia’s Sorento PHEV has its “quirks” as do all vehicles (especially PHEVs). PHEVs represent a different capability and functionality than any of us were used to, when they started showing up on the roads, and it takes at least a little re-learning to get the most out of them. I very much appreciate that you have invested the time and thought into practice, into adaptation, to make the most of your Sorento PHEV. I think many drivers simply don’t want to think about such things, they just want to get in the car and drive it.
Kevin D Pitchford wrote on March 29, 2022 - 12:28am Permalink
Thank you for your comments on the C&D article. I was not impressed by their article and was very disappointed in how they portrayed tis vehicle. They tried to test it as if it was the 2.5 model. I agree they have their biases and special interests. I have a PHEV on order and have researched it for quite some time and those who own them and drive them for what they are meant for seem to be very pleased. Thank you again for renewing my opinion of this car.
JustinHart wrote on March 30, 2022 - 2:52am Permalink
You’re welcome Kevin! I am very pleased with the Sorento PHEV, though I do wish it was easier to keep it in EV mode (that would take electric heating elements, possibly a larger battery, and a more powerful electric motor though). All that said, once you learn the vehicles limitations and how to work with them/make the most of it, it is stunningly efficient for such a large, heavy vehicle. I think Kia has done a fantastic job! Enjoy yours when it arrives!!