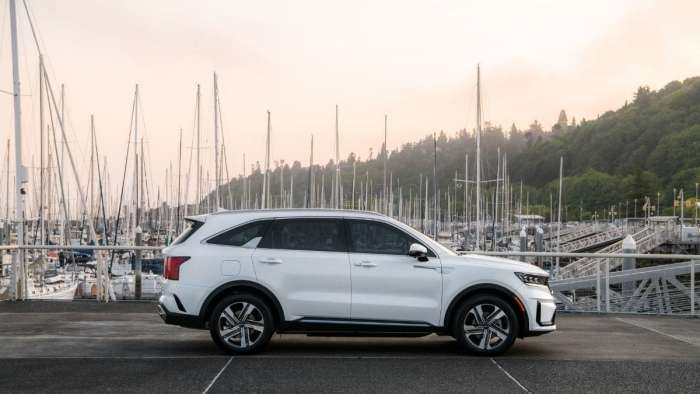 I finally took a longer trip in my 2022 Kia Sorento plug-in hybrid and I was able to test several important capabilities and features. My primary question was: what kind of fuel economy can I expect in colder temperatures on a long drive? For this test, that long drive was 210 miles. But I also tested a number of things people have been asking about on social media.
Advertisement

Here’s some context for those that care: it was a mild winter day in the Seattle area with temperatures in the low to mid 40’s, Fahrenheit. There was heavy fog, but no rain. I had a little over 300 lbs of people + cargo in the vehicle, and a smashed out rear window (covered up in thick plastic). The trip was done from my home in the Seattle suburbs to my in-laws home in a small rural town most of the way to Portland, OR on about 90% freeway with a speed limit of 60 mph for about ⅔ of the way and 70 mph for the remainder. Because of my busted out window, the flow of traffic for much of the trip, and the fact that my cargo wasn’t staying put as well as I would have preferred, I drove gently and kept my speed close to the posted speed limit the entire time (no more than a few mph over), though there were multiple sections of a few miles each with either stop and go or slow moving traffic. The route had several long, undulating hills, but no passes or especially steep hills. And for those who want to know: my tires were inflated to 39 psi, cold. Because rolling resistance, it’s a thing!

Besides efficiency, I also tested the following: how well the heating system works (people have been mentioning disappointing results with the Sorento’s output on social media), whether the Sport mode eliminates slight accelerator hesitation noticed by myself and others when in Eco mode (spoiler, it does!), whether my earlier efficiency testing results on shorter trips would align with this much longer test, how quickly the Sport mode might regenerate range, and last but not least what my estimated maximum range would be if I had kept driving the same route and same fashion until my full tank and full charge were depleted.

Now that you know lots of detail about the conditions and purposes of this test, how did it go? First, let’s just say I still believe I am smarter than my Kia! I think that no one should use the Auto mode (toggled by the EV/HEV button between the front seats) if they care about getting the best efficiency results. In my mind it is simply there for people who prefer not to think about this specific aspect of the performance of their plug-in hybrids. And that’s fine. That will be the case for some drivers, but since the primary purpose of most plug-in hybrids (at least those with useful ranges and less than insane amounts of horsepower and torque) is to use substantially less fuel and significantly decrease emissions, most PHEV drivers will care about this. So, I’ll sing it from the hilltops if I have to: you too can be smarter than your PHEV! Skip the Auto setting and manually toggle between EV and HEV!

Here are my efficiency results on the first leg of the trip, which was about 104 miles of non-stop driving: 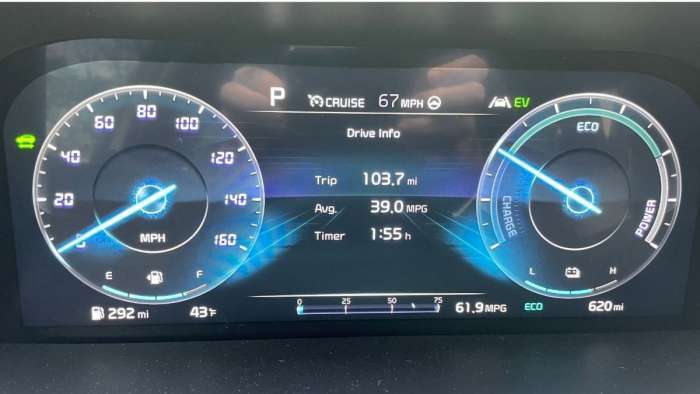 39 miles per gallon is 5 mpg better than the EPA combined rating for the Sorento PHEV, and remember 90% of this drive was done on the freeway as opposed to surface roads (which would have resulted in even better mpg since hybrids generally are at their most efficient when operating in slower and stop and go scenarios). I am impressed with the results and am also sure that if I had driven closer to 10 mph over the speed limit, instead, I would not have exceeded the EPA ratings. This is supported by the first ⅔ of the outbound leg where my mpg was at 41.7 until I entered a 70 mph stretch of interstate. After bumping up my speed, my mpg dropped to 34 until I exited the interstate and manually switched back to EV mode for the last 7 miles or so, which brought my mpg back up to 39. In total, I also estimate that I got about 35 miles of EV range on the full charge, with the majority of that being at speeds of 45-55 mph in traffic on the freeway or on two lane rural highways. Not bad Kia, not bad at all!

Stay tuned for my follow up article for the results of the rest of the drive test.

Patrick S wrote on February 24, 2022 - 2:42pm Permalink
Justin, thanks for your articles on the Kia Sorento PHEV. I got mine in November 2021 and I love it. However, deterioration in range and mileage has been severe. When I drove it off the lot fully charged I had a range of 460 miles (as advertised). The first time I filled it up I got a range of 390. Now I am consistently 330-350 miles including about 30 miles of EV charge. The calculated MPG is consistently 29-30 miles per gallon when clearly Kia says it should be 38 miles in hybrid (ex-electric) mode. What is wrong? Thanks for your ideas,
Justin Hart wrote on February 26, 2022 - 1:21am Permalink
Hi Patrick, and you’re welcome! Here’s what I think may behind your experience: winter, even if you live in a place that doesn’t have extreme temperatures, may reduce your range. If you live in a colder climate, this is especially true for a few reasons: lithium ion batteries are less efficiency in temperatures below 50 degrees F, so you won’t get as much range. If you are using the cabin heat in your Sorento, that turns on the gas engine (to idle) for heat as well, even if you have enough charge in your battery to drive only on electricity. Another thing that may be affecting your range is the way you drive of course. And I am not saying you drive your vehicle too hard or anything like that, but there are methods you can use to increase your fuel efficiency, whether that fuel is gas or electricity. What the Sorento PHEV shows you, in terms of range or mpg is always based on the recent trends in your driving. For example, after I took a long trip of 210 miles, in which I used almost half a tank of gas, my average fuel economy went down from about 190 mpg (this is a mix of the electric and gas powered efficiency) to just below 60 mpg. After returning to mostly short drives fully within the range of a full battery charge, a few weeks later, my mpg estimate was back up to near 80 mpg. Some tips if you a re trying to increase your range or mpg/miles per charge: If you can keep the heat off and still drive comfortably, do so. You can set the temperature in the Kia Sorento PHEV to “Lo” and that will just blow unseated air through the vents if you might need to defrost the windows or get some air in the cabin. But if it is too cold not to use the heat, the Kia should just idle the engine when you turn on the heat (and may not turn off even when stopped until you restart the vehicle). If you know that you are going on.a trip that is longer than the range of the battery, you may want to start your trip with the heat off, and as soon as you need the heat, switch the vehicle into HEV mode. This will warm up the engine faster than just turning on the heat, and you can switch the vehicle back in the EV mode later, after the engine has warmed up, and the gas engine may not come on until the engine cools down again. Other tips: Sport mode is far less fuel efficient, and in in my experience so is Smart Mode and Auto Mode. I have been able to get the best efficiency by manually switching between EV and HEV modes. I try to stay in EV mode whenever I am driving less than 40 miles on a trip, and if more than 40, I prioritize the EV mode for speeds less than 50 mph and HEV mode for prolonged speeds over 50 mph. Go easy on the accelerator. If you keep it in the “Eco” band, it will stay in EV mode until the battery is exhausted (which can be hard of course, especially if going up steep hills, but steady and even pressure is your friend). Try to keep your speed close to the speed limit (because the faster you drive the faster your burn fuel/electricity). These would be the biggest tips I can think of. Of course, these may not all be feasible for you, depending. But following these and a few other minor things is how I am able to get 35-42 miles per charge from my Sorento PHEV and, so far, no less than 39 mpg on longer drives. Good luck to you, and please feel free to ask me more questions about the Sorento PHEVs or other PHEVs and EVs. I am happy to share my experience, and tips.
Patrick S. wrote on February 28, 2022 - 3:19pm Permalink
Thanks Brian for the tips. I did know some of them, and it has indeed been cold recently, I will take it in to my Kia dealer to check what may be going on. Thank you very much
JustinHart wrote on March 2, 2022 - 12:53am Permalink
I hope they figure it out for you!