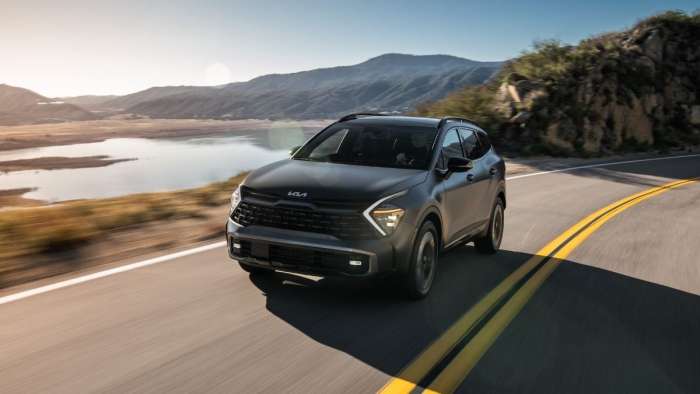 The first reviews of Kia’s newest plug-in hybrid, the 2023 Sportage PHEV, have come out in European media. Unsurprisingly, the reviews tend to be similar to what I and others in the U.S. have said about the larger Sorento PHEV which came out last year. For the sake of U.S. shoppers interested in Kia’s slightly smaller 2 row PHEV, coming sometime in Q3, I have pulled together a few new details from the first European driving reviews.
Advertisement

U.S. drivers can already purchase the standard 2023 Kia Sportage, as well as the 2023 Sportage Hybrid. It is radically redesigned from the previous generation and is substantially larger, going from one of the smallest compact SUVs on the market, to one of the largest. Highlights of the 2023 Kia Sportage, regardless of trim, include: best in class rear seat legroom and rear cargo capacity, and new standard Advanced Driver Assistance Systems (ADAS) like 360 degree Surround View Monitor and live feed Blind-Spot View Monitor. Anyone familiar with these versions of the Sportage, as well as Kia’s design and feature set for the Sorento PHEV vs its hybrid and non hybrid brethren, may also understand that Kia alters or limits some attributes of the plug-in hybrid variant. For example, the Sportage PHEV has a smaller gas tank which is due to the batteries needing to take some space from the otherwise larger gas tank, which is 14.3 gallons on the non-hybrid version, 13.7 gallons on the hybrid version, and 11.1 gallons on the PHEV version according to Kia. Interestingly though, the ground clearance on the Sportage PHEV is 8.3 inches, as it is for the other gas-only X-Line models, which is almost one and a half inches more than the Sorento PHEV. Thus Kia seems to be differentiating the Sportage and Sorento PHEVs in terms of trims and certain features, perhaps targeting the outdoorsy, road tripping small family set with the Sportage PHEV and the suburban, people hauling set with the Sorento PHEV.

The first European review I’ve come across has some interesting things to say about the Sportage PHEV. The UK’s Express & Star said that the Sportage PHEV is “at its best when running on electric, when it’s smooth, relatively brisk and impressively refined. When the engine kicks in it’s relatively unobtrusive, though never feels as quick as the 261bhp power figure suggests.” The review also says that it handles nicely for how heavy it is, offers great visibility, though the ride can be a little unsettled and that the six-speed automatic transmission can feel “jerky”. I wonder if the unsettled handling may be due to more aggressive tires fitted to some of the PHEV trims. This could explain why the Sportage PHEV they tested wasn’t as settled as they might expect. It could also have been partly due to the road surface (the review pointed out they drove mostly in “rural” settings).

The Express & Star review also praises the Sportage PHEV’s interior as arguably the best in its mainstream segment but ultimately recommends the regular hybrid version for those seeking the best value given the extra cost of the plug-in hybrid variant. For any future U.S. Sportage PHEV shoppers out there, remember that while it will be the most expensive Sportage, it is eligible for almost $6,600 in federal tax rebate (assuming you have at least that much of a tax burden to start with), and depending on which state you live in, may also be eligible for additional state and local tax rebates or incentives.

While this initial driving review may not reveal too many surprises about the Sportage PHEV, it does present something of a familiar story if you look at reviews of the Sorento PHEV, in that both are typically described as smooth, quiet, refined, and kitted out nicely compared to the competition. What do you think? Would you opt for the Sportage PHEV over the HEV version? Or are you more interested in the HEV version?

Leave your questions or comments below.

Fusae wrote on July 22, 2022 - 8:43am Permalink
Thank you for the review of 2023 Kia Sportage Phev. I am interested Sportage HEV or PHEV. I have noticed that HEV comes with a spare tire but how about PHEV? Do you have any info for that? Some of PHEV cars do not have a spare tire anymore because of battery space. Some luxury brands use run-flat tires instead of carrying a spare tire. (I am not a big fan of having run-flat tires on my vehicle.) I am also interested in hearing about price differential between HEV and PHEV in Europe. If you have the info, I would like to hear. Thanks
Justin Hart wrote on July 23, 2022 - 12:54pm Permalink
My 2022 Sorento PHEV has a compact spare tire (meant only for temporary use), mounted underneath the vehicle where the 3rd row seats are. I expect that the Sportage PHEV will NOT have a spare tire, but will attempt to confirm that when they go on sale here in the U.S. I say this after reading that "Due to the battery packs occupying much of the cargo space, a tire mobility kit replaces the compact spare tire" in this review: https://www.autotrader.com/comparisons/2023-kia-sportage-plug-in-hybrid-choosing-the-right-trim. Note, it is also possible that Kia will provide a compact spare for the Sportage PHEV in some countries but not all. If that is the case, and the Sportage comes with a spot for a compact spare, then of course one could buy a compact spare separately. I hope this helps!