I purchased a 2022 Kia Sorento PHEV in September 2021 sight unseen, without even having a chance to test drive it, because I was very excited about the features of the vehicle. Primarily, I was excited with the 2022 Sorento's all-electric range and fuel economy, seating and cargo capacity, and standard safety equipment.

I compared the 2022 Kia Sorento PHEV to nearly every other 3 row plug-in hybrid SUV on the market (there are not many) and the Kia Sorrento promised to be the lowest price/best value, most fuel efficient/best EV range option this model year. In fact, the 2022 Sorento PHEV beats Toyota in the 3-row PHEV crossover market. The closest plug-in hybrid 3 row SUV competitors are the Volvo XC-90 T8 (which costs several thousand more for the base model with less EV range and 30-40% fewer mpg on gas) and the upcoming 2023 Mitsubishi Outlander PHEV (which hasn't been released, but will have a 3rd row option, and better EV only range and fuel economy than its 2022 predecessor). Technically, the all electric Tesla Model Y, also available with a 3 row option, was on my list too, but I already have 1 Tesla, it has less ground clearance, less passenger and cargo space, and wasn't going to be available for at least 6 months or more due to production backlog, so I ruled it out (it would have been my 2nd option, otherwise).

My impressions of the Kia Sorrento PHEV are: the interior punches well above its weight class. It is similar in quality and tactile experience to what one would see in an entry level Volvo, Lexus, or Acura. The Sorento PHEV handles very well in corners, for a mid-size SUV, due to the weight of the batteries being low and central. The electric motor provides noticeable low end torque for responsive initial acceleration, though the extra weight of the EV powertrain does hurt it's acceleration time compared to the turbo 2.5 gas only version. Acceleration and handling should be more than adequate for most drivers. Where the Sorento PHEV might come up a little short is on deep, rutted off-road driving conditions. The PHEV has just under 7 inches of ground clearance, or about 1.4 inches less than the gas only version. In other reviews of the Sorento's off road capability, it is clear the Sorento isn't meant to be a serious off-roader, but that probably isn't an issue for most considering it. The AWD system handles rain slick hills with ease and I expect wintertime driving in snow will be equally confidence inspiring.

This is also a good place to point out how the electric and gas motor operate together and or separately. When the car is in Eco mode, the electric powertrain will move the car all on its own as long as the "tach" needle stays in the Eco section and out of the Power section (see right side of the gauge cluster). Bump the needle much past the divider between these two and the gas engine comes alive (though under all but hard acceleration it is with a sedate hum). Let off the accelerator and the car has gentle regenerative breaking; dip into the brake pedal and the regen increases until you get nearer the bottom of the Charge section of the tach and the friction brakes take over.

As far as fuel efficiency goes, I have been able to easily exceed the 32 mile EV EPA range by simply driving with a lighter foot on the accelerator (by keeping the needle out of the Power band). I have gone 39 miles on a single charge, at speeds at up to 72 mph, without fully depleting the battery charge so I expect 40+ miles is attainable with a light foot.

I have the top trim level SX-P which has an upgraded stereo, power folding mirrors, heated and cooled front seats, heated steering wheel and second row seats and several other safety and convenience features not in the SX trim plug-in hybrid option for 2022. 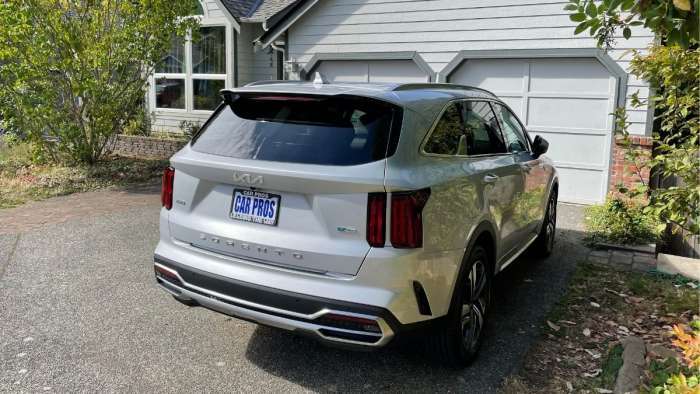 There are only two trims available for the 2022 Sorento plug-in hybrid, interestingly, and the non-plug-in hybrid only comes in the low-middle trims. My only criticism of this vehicle is the unusual way that Kia has broken out features and options. Things like wireless CarPlay are only available in the lower trim, non-plug-in models, for example, and other features like 3rd row vents are not available on the plug-in hybrid either. It seems some of these may have been cut due to either electrical load or space to accommodate in the PHEV model, or attempts to keep price down (it is the most expensive Sorento, otherwise).

Overall, I am thrilled with the Kia Sorento PHEV and highly recommend it to anyone considering a PHEV 3 row SUV.

Justin Hart has been driving electric vehicles for over 14 years and a proponent of EVs even longer.

LG's New EV Battery Plant Is a Welcome News for Tesla
Tesla Giga Berlin's New Hurdle: It's Not Only the Gov't, but Now Tesla Itself
END_OF_DOCUMENT_TOKEN_TO_BE_REPLACED