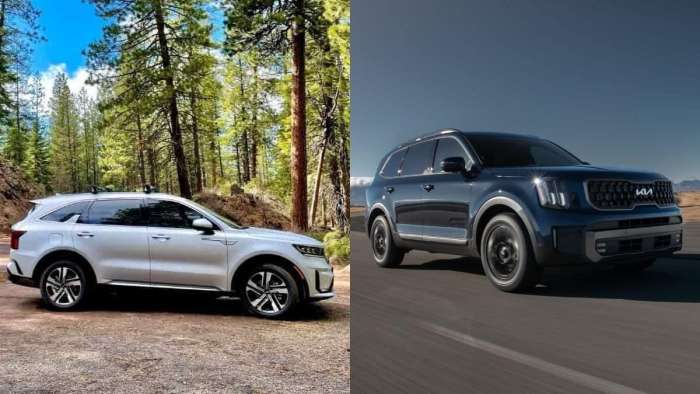 Comparing Kia ADAS systems in the 2022 Sorento and Telluride, flaws and all

Kia, via its sister company Hyundai, is ranked among the best automotive brands for its Lane Keep Assist features according to Consumer Reports. Kia uses the same or similar systems as Hyundai. Two of Kia’s best selling family vehicles, the Sorento and Telluride, offer a suite of Advanced Driver-Assistance Systems (ADAS), but there are differences in feature availability between them. These models are often cross-shopped and safety feature availability/performance may be a key decision factor for some.
Advertisement

First let’s look at the Lane Keep Assist features that Consumer Reports reviewed. In Kia’s parlance, these features are referred to as Lane Following Assist (LFA, which monitors lane markings to keep the vehicle centered in the lane) and Highway Driving Assist (HDA, which can control the vehicle’s steering, acceleration and deceleration functions on highways where information is available) and both are offered for the 2022 Sorento and Telluride model lines. However, the Telluride offers an iterated 2.0 version of the HDA feature (as an option) that in addition to maintaining a set distance from a lead vehicle and position within a lane, also assists in lane changing. I own a 2022 Kia Sorento PHEV SX-P and in testing the HDA and LFA features on a recent 400+ mile trip I was unable to detect any assistance from the vehicle in lane changing maneuvers, either when signaling for a lane change, or in performing them. Without more specific description from the Kia Sorento PHEV manual I am deducing that the difference between the versions is the lane change assist and the top spec Sorento I drive has ver 1.5 (which seems to lack that assisting feature). Note, I haven’t driven the Telluride and tested its optional HDA 2.0 system so my comparisons are strictly based on my experience with the Sorento and features sets as described by Kia.

There are several other ADAS features in both models besides HDA and LFA. Here’s a list of those additional features for the Sorento PHEV SX-P and the Telluride SX (the highest trim levels for each), with those in italics being features only available for the Telluride. Note that the descriptions of these features apparently changed during my writing of this piece, so I can make only a hesitant claim to the full, correct naming or description of these features, which mostly describe their functionality in an obvious way. Given that changeful state, I also can’t promise that this is a full and complete list of all ADAS features on offer.

Except for some optional and collision warning/avoidance features in the Telluride, the two vehicles actually have most of the same safety features. In my testing and research so far among Sorento PHEV users online, some of these features seem to have a few kinks in them that Kia (and other automakers) should devote resources to improving, ideally via software updates (if possible) that may improve pattern recognition and or vehicle response. The issue of perhaps the most concern: the Navigation-Based Smart Cruise Control–Curve (NSCC-C) and or Highway Driving Assist (HDA) may falsely interpret shadows, the position or width of leading vehicles, or for some other unknown reason trigger emergency braking assistance unexpectedly. This issue has been referred to as “phantom braking” generally and while I have not experienced this issue in my Kia Sorento while driving on the highway, I did experience it while turning and backing into a parking space. That means my issue was likely with the Parking Collision-Avoidance Assistance–Reverse (PCA-R) feature. Multiple people that I surveyed in a Sorento PHEV owners group described experiencing the phantom braking issue in their Kia Sorentos while driving on the highway though, for example when the shadow of a semi truck may have confused the cameras or the software interpreting their input. To be perfectly fair some owners also stated they had not experienced any issues with phantom braking and that it had worked successfully to save them from impacting another vehicle. Also in fairness, owners reported experiencing similar phantom braking issues in vehicles from many other automakers, and I have also experienced the issue in my Tesla (just yesterday in fact, while trying to pass a semi on the interstate). One user also reported zero issues in their Hyundai Genesis GV70, which has the HDA 2.0 feature that the Telluride also has (optionally), and was very pleased with its performance. So this might be an indicator that the different iteration of the HDA feature does a better job, though I would argue a much larger sample of data is needed to confirm whether its performance is actually improved. Overall, my assessment of Kia’s ADAS features so far is that they are at least as good the similar features in my Tesla, and in some cases may be better than those Tesla and other manufacturers offer. But they are not perfect and hopefully Kia, and others, will issue software updates to improve their performance which is something Tesla has done that other automakers could do more of.
I’ll write follow up articles with further testing of KIA’s ADAS features. Please leave any comments or questions about features you want to see tested below and I may incorporate these into follow up reviews.