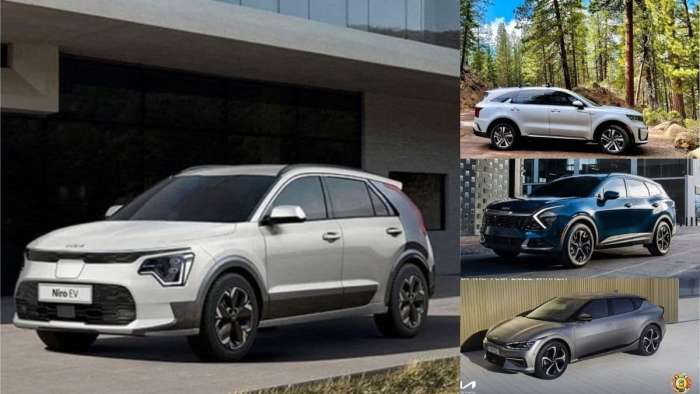 Kia’s U.S. vehicle sales trends for the month of June and for the first half of 2022 haven’t changed that much from the previous months and quarters for 2022. Their electrified vehicle sales, which include hybrid (HEV), plug-in hybrid (PHEV), and electric (EV) vehicles, are up significantly year-over-year, while their overall vehicle sales have slumped.
Advertisement

Let’s unpack this interesting mix of positive and negative year to date U.S. sales for Kia. First, Kia’s new for 2022 all electric crossover, the EV6, has been selling very well with 12,568 total sales so far, according to Kia. The EV6 only went on sale in the U.S. in February and is currently the third best selling electric vehicle in the U.S., if we exclude Tesla sales. Tesla of course still dominates the EV market in the U.S. outselling all other EVs combined, multiple times over, despite an 18% drop in global deliveries for Q2 of 2022 due to COVID related shutdowns and likely supply chain issues. Only Ford’s Mach-E and Hyundai’s Ioniq 5 have sold more units than the EV6 so far this year, at 17,675 Mach-E according to InsideEVs and over 13,000 Ioniq 5, also according to InsideEVs.

An interesting aside to these figures is that Ford’s Mach-E numbers actually show signs of trouble: June was the 3rd month this year that Ford’s Mach-E sales were actually lower than last year’s same month sales and their production volume is down over 30% year-over-year for the Mach-E, according to InsideEVs. Clearly, Ford is struggling with supply chain issues because the demand for their electric crossover is there. At the same time, if we were to combine Hyundai and Kia’s U.S. EV sales (which is a fair thing to do given the two companies’ ties and interdependencies), they currently outsell Ford almost 2:1. That may change as Ford ramps up sales of its brand new F-150 Lightning EV pickup, the current top selling electric pick-up in the U.S., but given Ford’s production troubles with the Mach-E, it is unlikely Ford will be able to scale production rapidly this year given the Lighting’s much larger battery packs. Still, it will continue to be an interesting race to watch between Ford, Hyundai and Kia.

Kia makes and sells several other electrified vehicles in the U.S. besides the EV6, though with the exception of the Niro which is a dedicated HEV, PHEV and EV model, does not break out the sales of its HEVs and PHEVs from their non-electrified brethren. Regardless, here’s what we can definitively say about Kia’s other electrified vehicle sales figures: Niro sales are up 49% year-over-year, at 17,666 combined for the first half of the year. This bodes well for Kia’s continued Niro sales growth for the remainder of the year with the introduction of the completely redesigned model year 2023 Niro. Kia’s all-new Sportage also just had its best sales month ever in June, selling 65,412 units according to Kia. Most of those sales are certainly non-electrified versions of the Sportage, but some number, perhaps thousands, were the all new HEV version of the Sportage. Later this year, likely by the end of Q3, Kia will also sell a PHEV version of the Sportage in the U.S. too. Still, even with that positive news, Sportage sales are down 2% year-over-year according to Kia. There is one other electrified Kia model currently on sale in the U.S. that comes in both an HEV and PHEV version, the 3 row Kia Sorento SUV, the largest electrified vehicle Kia currently sells. I have previously tried to estimate Kia’s North American PHEV and HEV sales, and will use figures and trends from that piece to estimate that the Sorento PHEV has likely seen around 4,000 U.S. sales through the first half of the year, and the HEV version likely somewhere north of that, perhaps as high as 6,000 - 7,000 units in the same timeframe, which most likely represents improved sales compared to 2021 given that the PHEV model only went on sale in Sep 2021 and the HEV model just began its sales ramp in 2021. However, the Sorento’s overall U.S. sales are down by 19% year-over-year according to Kia. In fact, only 3 Kia models had positive sales trends at the half-year mark: the EV6 (remember, it only went on sale in February), the Niro, and the Telluride (up 3%, year over year).

Even though we can’t precisely state how much Kia’s electrified vehicle sales have increased, there is really no doubt that year-over-year Kia’s electrified vehicle sales are up considering what we do know and can estimate with reasonable accuracy. Further, we can confidently report that Kia is outselling competitors like Toyota in plug-in vehicle sales in the U.S. as well, which is significant given Toyota’s previous lead over Kia in plug-in sales in 2021. I estimate Kia has sold at least 26,000 plug-in vehicles in the U.S. so far this year, compared to only 17,454 for Toyota and Lexus combined. Interesting times, don’t you think?

Please leave your questions or comments below.