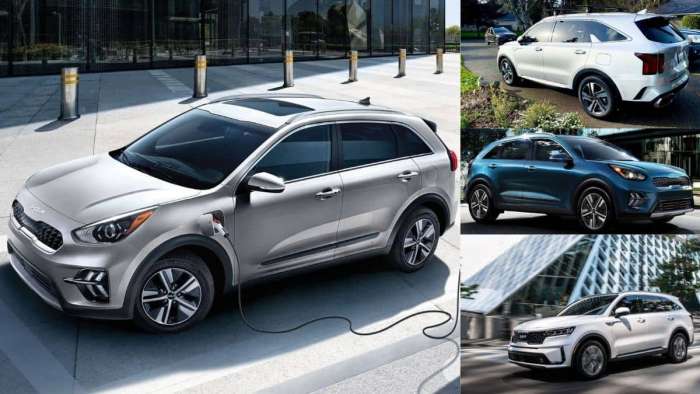 The Korea Herald recently reported Q1 “eco-friendly” car exports for Kia and Hyundai. As far as I can tell most (but not all) of Kia’s new plug-in vehicles exported outside of South Korea are destined for either Europe or North America. At least some percentage goes to other parts of the world (Australia, for example). What I want to know is: how many plug-in hybrids (PHEVs) is Kia delivering in North America?
Advertisement

Of course it would be easier if Kia broke out their PHEV deliveries or sales, but they don’t. So while I can’t be sure exactly how many PHEVs Kia directs to the North American market, given that only 75 Kia PHEVs sold in Australia last year according to carexpert.com.au (60 Niro PHEVs and 15 Sorento PHEVs, and I am using that as representational of exports to countries/regions other than North American and Europe), I’m willing to guess that somewhere north of 90% of their total PHEV exports go to either the European or North American markets. PHEVs have been at least somewhat more popular in Europe (which has more makes and models than the North American market), so I would crudely estimate that more than half of Kia’s PHEV exports go to Europe, which means that likely no more than about 40% of the total ends up in North America.

So how many PHEVs did Kia export in Q1 of 2022? According to the Korea Herald, Kia exported a total of 55,175 “eco-friendly” units in the first quarter of this year (an increase of 39% over the same period last year). Eco-friendly models include standard hybrids, plug-in hybrids and electric vehicles though. Luckily, the Korea Herald further broke down these figures for us. Kia exported 16,336 EV6s and 12,024 Niro EVs, specifically (the only EVs they currently sell). This means that the remainder of their eco-friendly exports, totalling 26,815, was made up of multiple different hybrid and plug-in hybrid models (at least 3, the Sorento, Niro, and Ceed PHEVs - the last of which isn’t sold in North America). The 2023 Kia Sportage PHEV sounds like it was not included in these figures for Europe as according to globalfleetmanagement.com, they won’t begin deliveries until Q2 of 2022.

InsideEVs previously reported on Kia’s production goals for 2022 for all eco-friendly vehicles, and assuming Kia has stuck to and met those goals so far, and that their production breakdowns between models are basically consistent quarter to quarter (which they most likely are not), then Kia will make around 75% more standard hybrids than plug-in hybrids this year (187,000 vs 107,000). If we accept and apply that figure to Q1 exports (beggars can’t be choosers, when it comes to data), that would mean of the 26,815 hybrid and plug-in hybrid exports, perhaps somewhere around 9,000 - 10,000 were PHEVs. If we apply the percentages I described in the second paragraph, that means Europe received somewhere between 5,400 - 6,000 Kia PHEVs last quarter, and North America saw somewhere between 3,600 - 4,000 (which would have been split between only the Niro PHEV and the Sorento PHEV). Since the Korea Herald calls out “robust” sales of the Sorento PHEV, we might assume that more than 50% of the PHEV figures are for the Sorento PHEV, at least for the North American market (where larger SUVs would be more popular). So for the North American market (which may only be the U.S. and Canada, at present), Sorento PHEV sales for Q1 were likely around 2,000 units or more combined, and Niro PHEV sales were less than 2,000 combined.

Why do I even bother with these estimates you might ask? Because I know there are many people out there interested in Kia’s PHEVs, and many people waiting months (or even over a year) to get them. Knowing something about their export figures can give us a sense for how quickly Kia is ramping production, what progress they are making toward their annual targets, and maybe just a faint hint of how long the wait might be.

Got questions about these estimates or Kia’s eco-friendly cars? Let me know, and leave any other comments below.

Images by Kia and Justin Hart.