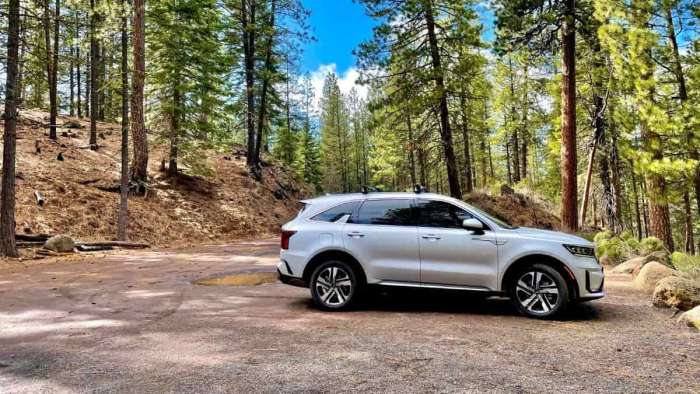 Kia PHEV Road Trip: the Perks and the Jerks

Owning a plug-in hybrid (PHEV) comes with some special perks including the ability to utilize two forms of fuel, one of which is sometimes available for free and allows the blissful experience of all electric driving. We just spent a week at a resort on the Deschutes River near Bend, Oregon which also offered the luxury of free 240V charging.
Advertisement

With those free charges we covered approximately 130 of the 200 miles we drove locally while visiting Bend in our 2022 Kia Sorento PHEV. While we could have covered all of our miles on electricity if we had driven our other car, a Tesla Model 3, we wanted to test our new vehicle on some back country roads and didn’t want to deal with the possibility of having to drive 40 mins out of our way to the closest supercharger should the on site chargers be unavailable. Note, we made this same trip a little over two years before in our Tesla and had no issues getting access to the onsite charger, but I am such an electric car nerd that I know that since our last trip the number of plug-in vehicles on the road in the Pacific Northwest has roughly doubled, but the charging network is another story. This is exactly why I own both an EV and a PHEV. I am both thankful and encouraged by the charging experience we had on this trip; thankful we had the option of getting to our remote destinations with just a little gas and could usually charge back up at the resort and encouraged by how many other guests were also queued up for a charge.

While staying at the resort we charged up a total of 6 times. There were at least 5 different Teslas, a Chevy Volt, a Hyundai Kona EV, and a Toyota Rav 4 Prime all vying with us for time at the two chargers (one universal 240V charger, and one 240V Tesla destination charger). This meant we all had to wait, sometimes. On one day in particular, that waiting felt particularly long because an owner left their PHEV plugged in after charging finished, with the charging head locked into their charge port. I am such a car nerd that I know how long this SUV could take to charge from empty and I knew what the charging equipment was capable of delivering from my own use. I drove by potentially only a few minutes into their charging and came back twice, once at their first possible end point if they had the optional “faster” charger their vehicle offers, and again about half an hour after their longest possible session. They were still sitting there, blocking the charger. I took a walk, pondered the meaning of life, or at least the meaning of sharing, and still that SUV sat horking the charger. What a jerk!

Please move your vehicle when finished charging. Thanks! This is what the small note I left under their wiper blade said, but I wasn’t really writing it for the owner blocking the charger. I was writing it for me, to satisfy some misplaced nerd rage. This inconsiderate person should know when their vehicle is done charging! But I had no idea who this person was, or what situation they were in. Maybe they fell asleep? Maybe they’d been absorbed into one of those horrid timeshare condo presentations where they pressure you to fork over everything you own in exchange for an eternal suntan and free eggs benedict for life? In truth, I was the one being a jerk. I was impatient and obsessive about keeping our PHEV juiced up. In any case, sharing is something that takes continual practice I guess, and hopefully the resort will see all these plug-in cars utilizing the chargers and soon install more, or consider a means for managing their use more effectively (a reservation and or concierge system perhaps). I am sure most guests would be happy to pay something for their use, assuming they could count on getting their cars charged when needed and to the level required. I know I would.

Other than my lesson in patience, this trip also gave us a chance to test the handling of our Sorento PHEV on some varied terrain. We drove it down 5 miles of muddy, deeply rutted forest service roads to reach a hiking spot. Note these ruts were no more than 4 inches deep, and there were no large boulders in the road itself, so the Rubicon Trail it was not, but the Sorento handled these mud slick tracks like a boss. The AWD never flinched and the suspension kept us comfortable over the bumps on a rough patch of dirt road on our way to some amateur spelunking (it's what all the kids are doing these days). We also got to experience some beautiful, twisty asphalt through the foothills of the Cascades. These had multiple hairpin turns on steep hills, and again our Sorento handled these confidently and without significant body lean. 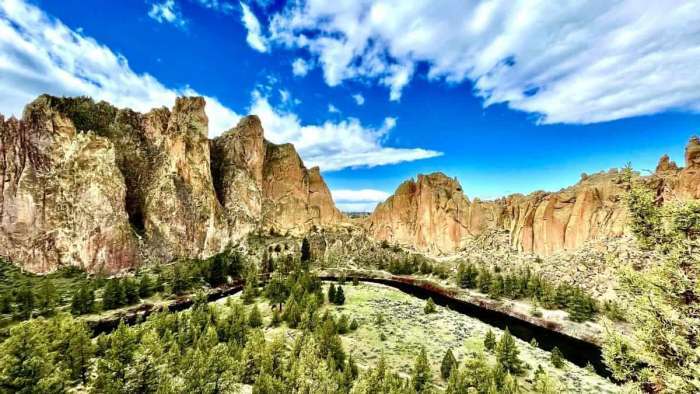 The cargo volume of our Sorento PHEV was perfect for this trip too. We only needed the first two rows of seats and filled the back with our food and belongings that kept the three of us full, entertained and warm for the week. We had all the cubbies and storage spaces we needed for our gear, all within easy reach. My wife even got to test the full power of the Sorento in uphill passing maneuvers and there were definitely no issues passing quickly and with ease. The 1.6 liter turbo did come alive when pressed, but it was not too loud or harsh, and actually sounded a bit sporty. We also tested the braking power when my wife missed a turn. While we didn’t quite do a panic stop, we did stop fast enough (the last 25 feet or so in loose gravel) for me to get a sense that the heavier PHEV has adequate braking power. 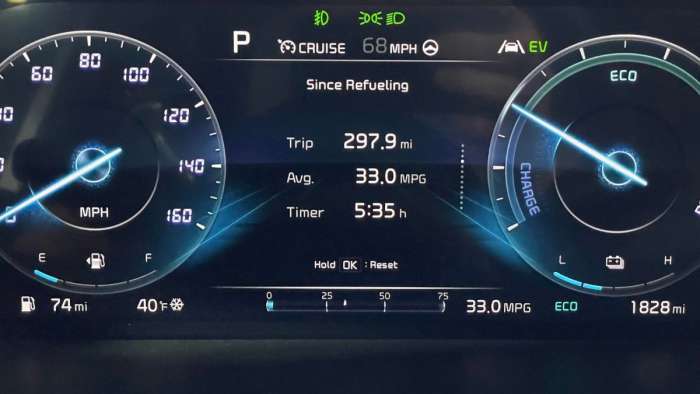 Finally, I’ll share the last bit of fuel efficiency data for those who followed my two previous stories on this adventure. We drove a total of 929 miles. A little over 230 of those were on electricity, and the rest on gas. At our final fill up, the car would have displayed just under 400 miles of range (if the battery hadn’t been about 3/4 discharged), mainly due to the long freeway drive we had just done. We averaged about 35 mpg over the 356 mile drive home (33 mpg for most of the return leg, and 42.5 mpg the final 60 miles). How? By driving within a few mph of the speed limit. In fact, I unintentionally did a test over the first two hours of my return leg: I determined an exemplary average speed that would return the EPA rated mpg figure of 34 mpg precisely. That average speed? 53 mph. It was easy to achieve because about half the drive home was on rural highways with 55 mph speed limits or spent in slower moving traffic as we approached and left Portland, OR. When we started this trip, our accumulated mpg was a stunning 111. After pulling into the driveway at home, it had fallen to 58.8, which is not surprising. I’ll be taking other road trips soon. The weeks in between spent running errands around town and such will gradually tick those mpg figures back up toward the triple digits. Thanks for reading, come back soon for the next trip, and please leave any questions you have below. Cheers! 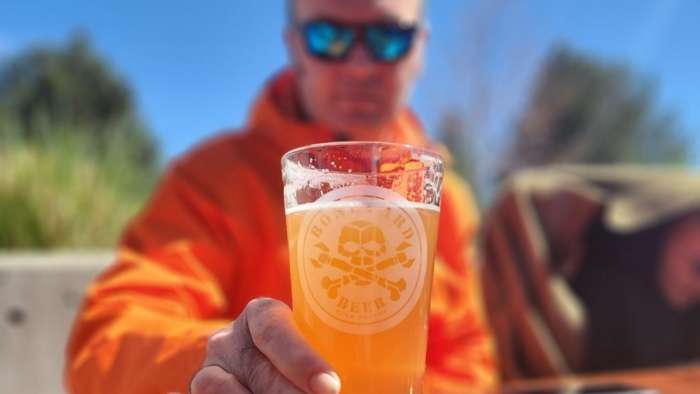 Images courtesy of author and his friend, Alex Gillespie.