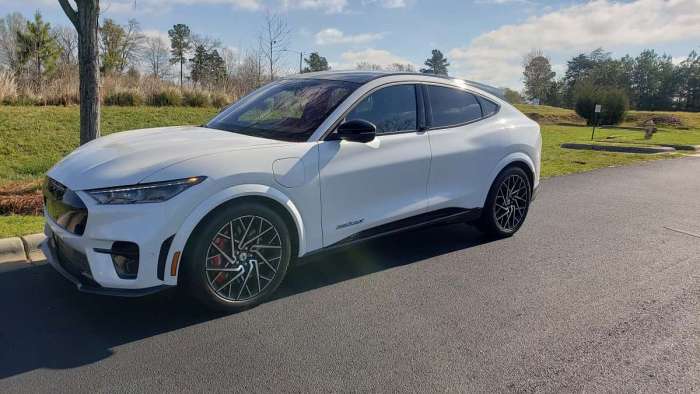 The loud calls for a "real electric Mustang" now should be silenced since Ford has introduced the GT version of the Mustang Mach-E, which has amazing 480 HP, 3.5 seconds 0-60 mph, 600 lb.-ft. torque and 270 miles EPA-estimated range per single charge.

I mean look, if it's called a Mustang, then it must also be available as a GT. This is why the ford strategists have given the Mach-E's top trim the now market-ready GT name.

We at Torque News, were able to find out how that feels in practice. The first few miles at the wheel of the 2022 Mustang Mach-E GT on country roads outside Charlotte, NC showed that this is a real muscle car. Most people don't realize that you are driving one of the fastest accelerating cars in the world. With the Mach-E GT, you can also stroll quite comfortably - and quietly - without being constantly reminded of the slumbering power reserves.

The driving modes of the Mustang GT - Whisper, Engage and Unbridled with each offering finely tuned driving dynamics packaged with specific sensory experiences - can only be selected via the central touchscreen - not only allow the performance characteristics of the Mach-E GT to be controlled, but with the latter two experiences, the driver can also select the "Propulsion Sound" option, so you can import virtual engine noises.

With Unbridled mode, the steering stiffens and the powertrain is slack, which can even cause all four wheels to spin on wet pavement. Despite its significant weight the electric crossover moves very easily in a straight line, while more winding roads are not a problem, provided you respect the laws of physics.

In this configuration, the system makes every effort to give the passengers the feeling that a powerful V8 engine is doing its job under the hood, just like it used to be for a combustion Mustang GT. Not only does this work very well acoustically, but the driving performance also fits perfectly into the picture, at least if you just go straight ahead with a lot of free road in front of you. In any case, the electric GT cuts the best figure on the classic quarter mile – the traditional benchmark for US drag races. 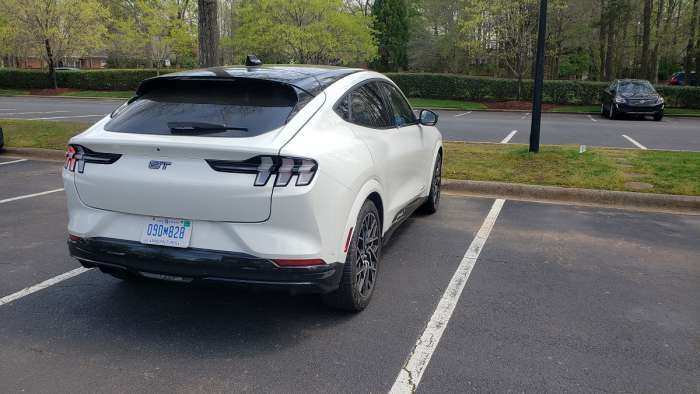 Despite the catapult-like performance of the Mach-E GT and virtual soundscape, there is still no authentic ICE Mustang driving experience. The seating position is just too high for that, but you also get lots of headroom. As a pilot, you don't forget for a second that you are actually driving an SUV, aka a crossover, albeit an extremely powerful one. This knowledge is also underlined by the effects of the high vehicle weight (from around 2.3 tons) that you are driving around. It's not that the brakes aren't good and that the strongest level of recuperation doesn't contribute to good deceleration, but light-footedness and agility inevitably feels different compared to a ICE Mustang GT.

The chassis of the Mach-E GT are great and the precision of the steering is also worthy of a GT. This means that the muscle EV is also able to offer adequate driving pleasure when things get winding.

After the first hundred miles of driving the GT trim of the Mustang Mach-E, it can already be said that Ford has delivered an electric car here that has everything from a relaxed family transporter to a catapult racer.

One of my neighbors, who recently bought the 2022 Tesla Model Y Performance for his wife, suggested we park our cars on the street and casually compare them with a walk around. Hear him speaking of his experience of owning the Model Y performance after 45 days of ownership.

They both have the same 480 HP and about 270 miles of range. The Mach-E GT has a bigger battery. Both the Tesla Model Y Performance and the Mach-E GT are lovely cars. There are differences and personal preferences should not prejudice technical facts.

Some people may think that appearance wise the Tesla Model Y Performance is more distinctive compared to the Mach-E GT. It's much more recognizable. But I find Mach-E's design more attractive. It's more classy. Yet, Tesla is more timeless. 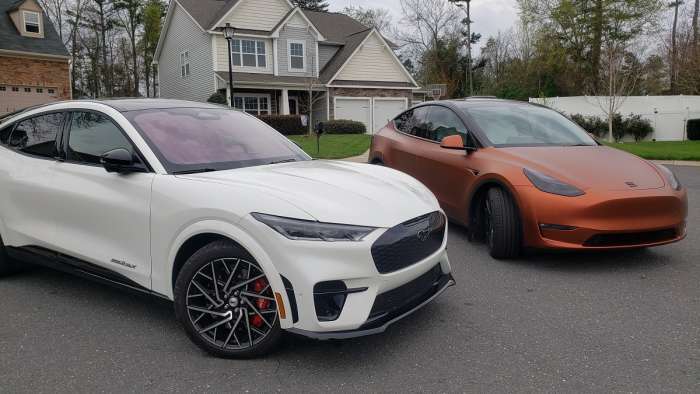 As my neighbor said in the interview, the interior of the Tesla Model Y is more simpler. Tesla has placed heavy emphasis on the software and it's like a computer on wheels. The materials, used in the interior are of lower quality in Tesla, but of rather higher quality in the Mach-E trims. Inside the Mach-E GT, you have a small instrument cluster, which puts the main information in front of your eyes. Yet, you still have the Tesla-like computer screen in the middle of the dashboard with a knob in the lower center to control the volume.

The Select only has the Standard Range battery. The GT only has extended range and AWD. The other two could be configured with any combination of battery and drivetrain.

The Mach-E Select trim with Standard-Range Battery and eAWD has 266 HP. however, the Mustang GT has 480 HP. I reviewed the Mustang Mach-E pre-production model last week and it looked the same as the GT, when it comes to the design and look. Thus, I think the main reason people chose the GT is for the power. However, I should say, that I was very pleased by the power, performance and the acceleration of the Select trim as well. 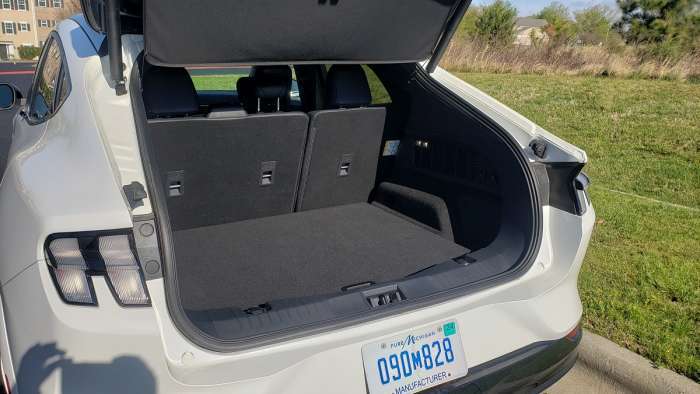 If you are coming from a typical ICE vehicle, any version of the Mach-E will feel like it’s fast. The GT is for folks who are looking for a high performance vehicle. The 2022 Mustang Mach-E GT is not just a little faster than a Select. It’s A LOT faster.

Also, another reason people choose the Mach-E GT is because of the Magnaride suspension. It's only available on the GT Performance edition of the Mach-E. People say this is a much more sophisticated suspension and the ride quality is much better. I didn't feel much difference in terms of ride quality between the trims, but I do agree that the ride quality in the GT Mach-E is really good.

Also, the 20-inch multi-spoke rims fill the wheel arches much better with a brake system revised by Brembo and its calipers painted in red, not to mention the added aerodynamic appendages which give it a more serious look.

The "grille" is exclusive to this performance-oriented version, which even receives an illuminated crest at night. Finally, note the presence of the letters "GT" in the center of the rear hatch, a detail that distinguishes this electrified hot rod from other electric Mustangs.

Inside, there is no change between the trims. I would say the GT is great, but if you can settle for the Select or the Premium, you will be very satisfied with the performance.

The fact that the Mustang Mach-E GT is a bit "stretched" in proportion is a good thing, as both rows are accommodating for two adults up front and two adults and a child behind. The presence of the glass roof also gives the impression of sitting in a larger cabin than expected, while the flat floor at the rear makes it easier to sit in the center of the bench seat.

Overall, when it comes to the 2022 Mustang Mach-E GT, I would say: powerful, more fun and certainly more convincing in terms of handling than the other versions of the model. I really loved the surprising comfort of the Mustang Mach-E GT, the impressive acceleration and the good initial quality of materials used in the interior compared to the Tesla Model Y.

Have you driven the Mustang Mach-E? What is your opinion about this electric crossover? Do you agree that Ford has done a great job with this EV? Let me know your thoughts in the comments section below please.