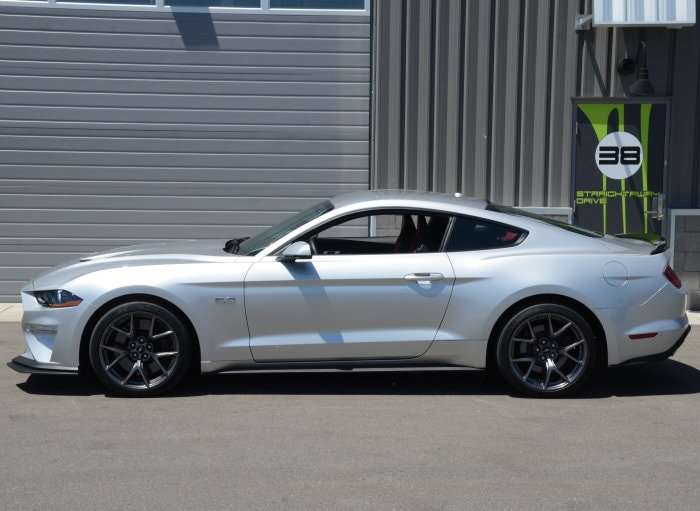 The new Performance Pack 2 transforms the 2018 Ford Mustang GT into an awesome road course machine, sticking to the corners and blasting down the straightaways of the M1 Concourse track like a world-class sports car – all with the sweet roar of American muscle.
Advertisement

I was recently invited by Ford Motor Company to come to the M1 Concourse in Metro Detroit to test the 2018 Ford Mustang GT with the new Performance Pack 2 on the road course. I jumped on the opportunity and after spending a few hours tearing around the track, I was very impressed with how well the upgraded volume V8 car handles the twisty track. After all, the Mustang and the rest of the modern American muscle cars are often accused of being nothing more than quarter mile monsters, but the newest Mustang GT is a beautifully balanced performance car and when you add the Performance Pack 2 – you get a pony car with almost Shelby-like capabilities.

First, to get the Performance Pack 2, you have to first add the features of Performance Pack 1. That includes Brembo 6-piston front brakes, a strut tower brace, a front subframe brace and a K-brace.

So, compared to the basic Mustang GT, the Performance Pack 2-equipped car has a heavily revamped suspension setup, a variety of chassis braces, bigger brakes, bigger wheels, some of the stickiest road course tires on the market and some subtle aerodynamic bits.

It is a pretty elaborate package and it has a big impact on the road course capabilities of the Mustang GT, making it a blast to drive on the curvy course.

Driving the Mustang GT PP2
In some cases, track time is preceded by some time on the road in the same vehicles, but my seat time in the 2018 Ford Mustang GT with the Performance Pack 2 began on the road course of the M1 Concourse. All PP2 cars are equipped with the 6-speed manual transmission while my test car had the Active Valve Performance Exhaust system and the optional Recaro bucket seats. This is the highest performance non-Shelby Mustang that you can buy right now, packing all of those handling bits into a muscle car with 460 horsepower and I was incredibly excited to get behind the wheel and get on the track.

I was in the second group of writers to hit the track, so I stood trackside while the safety people set me up with my helmet and Hans device while the first group of drivers blasted around the track. The first thing that struck me as how good the Mustang sounds with the active exhaust system. I have seen videos and I have heard the system on the street, but this is the first time that I got to experience the sound of the adjustable exhaust system in person in a situation where there is lots of wide open throttle. The tone and volume level of the Mustang GT exhaust system in Track mode is nothing short of awesome. As soon as the driver picks Track mode and the exhaust valves open, the Mustang GT has an idle exhaust note that might be one of the loudest and most aggressive on the market today – and I daily drive a Hellcat car. In every way, this system sounds like a good aftermarket set of pipes and it is my professional advice that every single new Mustang GT buyer orders this exhaust. It is $895 and it is worth every cent.

When my time came to hit the track, I climbed into the car, fired it up and flipped it to Track mode, unleashing the sweet grumble of the 5.0-liter V8. I adjusted the Recaro seat to fit my frame, I buckled my seat belt and I headed out onto the track with an instructor riding shotgun.

The Champion Motor Speedway at the M1 Concourse is a 1.5-mile, 9-turn road course with a heavy speed bias. The track has several long straightaways and the turns are all fairly simple, making it a great track for testing a new car. My first lap was a schooling lap with the instructor providing pointers on the car and the track, but as I came out of turn 9 on that first lap, it was time to hammer down.

My next two laps were run hard, pushing the 2018 Ford Mustang GT with the Performance Pack 2 to the edge of its abilities and the car responded beautifully. The combination of the specially-tuned suspension and the huge Pilot Sport Cup 2 tires afford the Mustang remarkable cornering grip, so even if you don’t get slowed down in time for the ideal entry to a turn – the car is forgiving, sticking to the track like it is on a rail. Even if you get very deep into a turn before hammering the brakes, the Mustang GT PP2 lets you point the nose where you want to go – and that is where you go.

On exit of the turns, the sticky tires allow you to go wide open right away without any real concern of traction loss. On the longest straight of the M1 track, I got to experience the insane 7,500rpm redline, hitting speeds over a hundred miles per hour in third gear as the 5.0-liter engine screams. As muscle cars with cross-plane V8 engines go, it is a very unique experience twisting the engine so hard while rocketing around the track. However, that extreme redline allows you to do less shifting on the long straights, making this Mustang even more capable on the track.

With each lap, I got a bit more comfortable with the car and more confident on the track, allowing me to push the car harder and the Mustang GT PP2 just took everything that I handed it with a smile. The transition from a high speed straight to a tight turn requires hard braking and in many cases, that can lead to a loss of control, but this Mustang is nicely planted under hard braking, making it that much easier to get into the turn.

While the Ford Mustang has improved a great deal in the handling department over the past few years, the Performance Pack 2 is perfect for someone who wants Shelby-like handling without the price of the Shelby packages. Adding PP2 to the Mustang GT requires popular equipment group 301A and Performance Pack 1, so when you build out one of these cars with PP2, the active exhaust system and the Recaro seats, the MSRP is $47,340 while the Shelby G350 starts almost $10,000 higher.