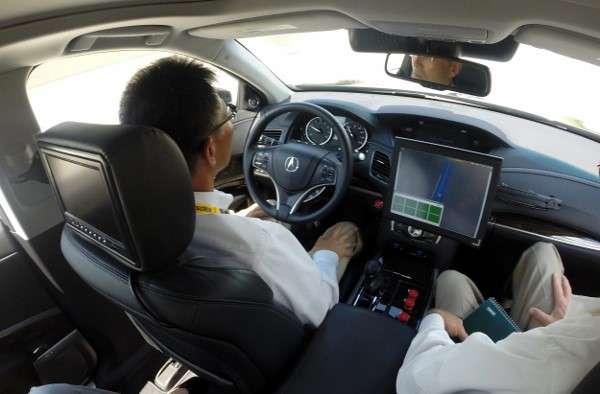 In a recent article posted by a fellow journalist through Torque News-Honda it was implied that 2015 CR-V was “self driving.” yes and no…
Advertisement

Autonomous cars and trucks are comming: My friend and fellow automotive journalist John Goreham is a good man. He’s excited about the future capability of autonomous self-driving and parking cars. As John rightfully stated, the technology has been around for several years. Google’s had a remote controlled driverless car terrorizing the residents of Mountain View, Ca. for years. Yes, the technology works and is viable as a not too future virtual tow traffic train.

As reported by our friends at NBC News, Honda R&D of Japan recently conducted a live demonstration of Honda’s programmed self-driving car on an 8 mile loop around Detroit.

The specially equipped Acura RLX drove a Honda engineer and fellow automotive journalist onto a freeway on ramp, obtained freeway speed, adjusted following distance to prevailing traffic speed, safely exited the freeway and parked itself; without the aid of a human operator.

Several cars and SUVs in North America Acura’s lineup, including RLX,TLX, MDX and RDX feature camera and radar monitored and activated passive and active accident prevention electronics that can ( to a certain extent) drive themselves without the aid of a human occupant.

Honda Accord Touring, Pilot, CR-V Touring and Crosstour also feature variations of these systems. For those of us that prefer self driving, watching our own lane changes and cruise control following distance, can disable the system with the push of a button.

What the future holds for all auto manufacturers

Companies such as American Honda Motors look to reduce auto accident fatalities 50% by year 2020. That’s less than a model year down the road for most manufacturers. Driver aafety is Honda's real-time motivation for developing automated driving systems; it''s a company-wide mantra.

While EV icon Tesla Motors touts a self driving system for Tesla S that may come to fruition in 2016, it coulld be noted(today) that hands-free driving is illegal in the U.S.. Much like the guy that goes to the galley in his motor home to make a sandwich while driving down Route 66 on cuise control, the broad implications of automated GPS dirrected driving can and will be hazardous.

Who’s on first, who's on second?

Who cares? We know two things for sure, automated driving will be implemented first in Boston. Los Angeles and New York. That’s where the money and the cooperative effort between civic and corperate entity works to develop these systems and where traffic mitigation is most needed.

The 2014 Los Angeles Auto show will host a conference on autonomous driving within commuter networks. Stay tuned for further reports and developments from L.A.

Carl wrote on October 15, 2014 - 1:08pm Permalink
At one point, the Subaru Eyesight system was said to include with the active lane monitoring system a feedback system where, if the car started to cross a lane marker without a signal, the steering would automatically correct and put you back in the lane. It wouldn't be that difficult to implement. BUT - that would, effectively on interstates, change Eyesight from a Driver Assist system to a Driver replacement system. Between adaptive cruise control (which is a great feature), active collision avoidance, and then if the lane monitoring system became lane correcting (and tie blind spot monitoring into it) - once you got the car onto the highway and set cruise, the driver really would no longer have to monitor the road at all. The car might drift back and forth a little across the lane and that's it. Which of course, points out the inherent hazard and unsafe conditions behind ANY automatic driving system. Road hazards - how many times have you had to jerk the wheel to avoid a chunk of semi tire rubber? Ever seen a deer bounding across a highway, and realize that if you hadn't hit the brakes (because you saw the deer on the shoulder) you'd have splattered it? What about, in city driving, when a pedestrian jaywalks? There are laws right now in most states against texting while driving, and in all states regarding distracted driving. What happens with the law when you have an automatic driving system? The operator of the car is certainly going to be distracted - so who is liable?
Parks McCants wrote on October 15, 2014 - 10:31pm Permalink
Good evening Carl. The autonomous systems are being developed for controlled freeway applications. On a recent trip to Los Angeles and Orange County, Ca., I was reminded of how congested the morning commute is in high population urbane areas. We experienced the same condition in San Francisco when reviewing Acura TLX. Freeway congestion has rendered personal transportation useless in a daily commute capacity. Autonomous cars and trucks would operate on a GPS remotely controlled traffic flow grid. It's comming, just a matter or time.