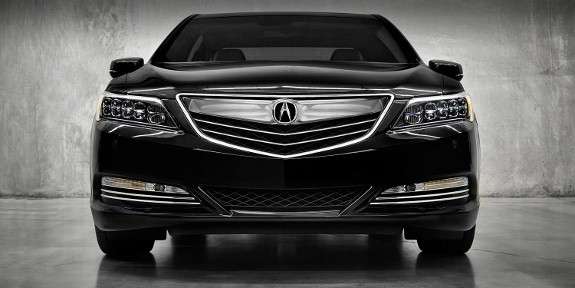 While it may be another year or two before North America greets the release of a 2nd generation NSX, Acura’s Uber-advanced RLX Sport Hybrid is touring the nation, and is coming to a city near you.
Advertisement

It’s not your grandfather or parents Acura. Actually, no one has owned one like it and In fact, from what we‘ve measured through research, ownership and hands on test driving, no other manufacturer on the planet can offer you the combination of race-tested hybrid multiple motor/ engine drive technology presented in the 2015 RLX Sport Hybrid.

Acura has taken the flagship of the line and kicked it up a notch as to combined horsepower and torque rating. While the current $60,000 3.5 liter i-VTEC V6, SH-AWD (all wheel drive, all wheel steering) RLX offers stellar performance and exceptional driver and passenger cabin accouterments, The RLX Sport Hybrid will do so with a twist; It’s green; to a point.

We’d like to see the stated average mpg come in a bit higher. 28/32/30, while exceptional for a performance luxury sedan, will not attract the green crowd.

When released to North America in early spring, the RLX Sport Hybrid will offer a claimed 377 * total system horsepower, electric motor directed torque, battery regeneration from all four corners of the car. And, the capability to “drive off” and cruise in electric only mode. Think of the 2014 Accord Hybrid Tour on steroids.

Is the car complicated? you bet.

Acura has set its sights on BMW, Cadillac, Lexus and Mercedes Benz with the near future release of the RLX Sport Hybrid. According to our friends at Autoweek, and we agree, Acura’s intended market is the U.S. domestic luxury performance car segment.

Off course luxury with a ‘green’ twist will come with a hefty price tag.

While Acura has not released final MSRP for the benchmark in luxury hybrid performance, based on the current high water mark, we anticipate pricing to fall between $60,000 and $70,000.