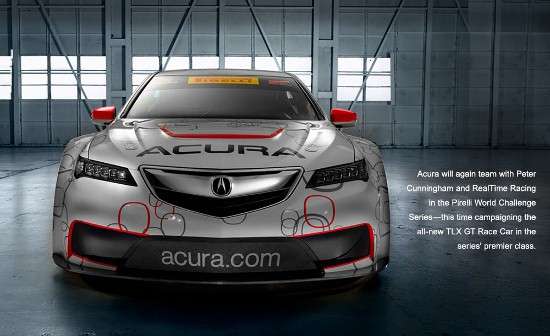 With the release of Acura’s most advanced sedan mid-year 2014, anticipation runs high as team “ Real Time Racing” prepares for Acura’s attack on your perception of what a true performance luxury sedan can and can’t do.
Advertisement

Honda’s racing arm, HPD has partnered with the winningest team in the 25 years of Pirelli World Challenge racing history; to front a G.T. Tour Class assault on the biggest names in racing.

While my buddy’s at Torque News -Subaru pen wild exclamatory prose as to their anticipated domination of the World Challenge racing series by the latest BRZ 300 G.T., We tip a hat to the all wheel drive, all wheel steering, bi-turbo V6 monster wearing the Acura moniker.

For Honda and its now stand alone Acura Motor Division, we propose that Acura is to Honda what Cadillac is to General Motors. For both corporations the respective subordinate division represents the future in performance sports coupes,sedans,SUVs and in the case of Cadillac, sport wagons.

We believe that the 2015 TLX will dominate its sector for several years to come. Bringing Acura back into the forefront of the “affordable” refined, luxury sports class. Gone will be the painfully stiff ride and small cabin confines of the Acura TL., good riddance.

While the TLX doesn’t offer the monster horsepower and torque(556 hp,551 lb-ft torque) of Cadillac's V series, it does line up squarely in the sights of current CTS owners; affluent 35+ year olds wishing to perform a bit of performance driving while spending less than $50,000 to do so.

Our sources indicate that the TLX GT will be limited by class restrictions to 400 hp. Can we expect a twin turbo V6 in the factory TLX ? Doubtful.

Although an official TLX price and specification sheet has not been released to date, we may assume that the retail price will land within range of the 2014 TL, with handling, ride and performance slightly exceeding those of the replacement model.

Acura, through the introduction of the 2015 TLX will return the maker to a position of prominent participation in the luxury performance sedan class.