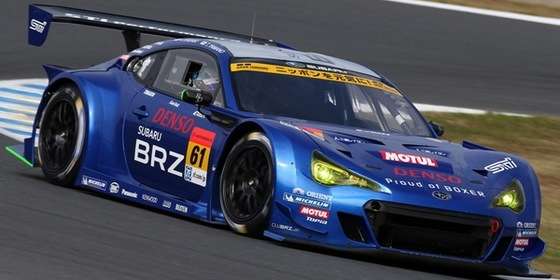 The new 2014 Subaru BRZ GT300 race car has just completed its first official test for the SUPER GT series and it’s looking good. Just like baseball teams this time of year, the Subaru team is brimming with optimism for the upcoming season and they think they can win it all. The opening round takes place on April 5 at Okayama International Circuit in Japan.

The Subaru 2014 BRZ GT300 team reports testing went well and they are ready to proceed with preparations for the opening race. Qualifying will take place on April 5 and the race on the following day. The SUPER GT is Japans most popular racing series and the BRZ GT300 will be highly visible and competitive with Subaru R&D Sport making all the preparations on the car again this year.

Last season, the 2013 Subaru BRZ GT300 race car snatched pole position five times in eight races and achieved a class win, so it was a successful first year for the BRZ two-door sports coupe. R&D Sport has upgraded the new 2014 version and STI will aim for a series win this year. The BRZ GT300 raced in its first SUPER GT last year at the Suzuka track.

This year’s BRZ GT300 has been upgraded from last years model by Subaru Technica International (STI) who led the development of the car. The car will be ready to participate in every race series with the intention to win it all. The car will fly and will have an experienced pilot Kota Sasaki behind the wheel. First time, SUPER GT driver Takuhito Iguchi will also be ready to go. Eiji Tatsumi will be in charge of the STI team and racing operations.

Subaru is committed to motorsport around the globe not just to win, but it also helps them develop the technology that we see in the production vehicles we drive everyday. They will gain valuable insights from the lessons learned through the grueling Nurburgring 24-Hour race in Germany with the 2015 WRX STI, and the new all-new 2014 BRZ GT300 that competes in the SUPER GT Series in Japan.

Even though the race cars may not win it all, valuable knowledge is gained from the Subaru Technica International (STI) teams that goes into the performance cars like the BRZ two-door coupe and Subaru WRX and WRX STI performance production cars. Subaru has been on the racing scene in various forms around the globe since the 90s. They have transferred the technology to the production STI vehicles we see today.

The 2014 Subaru BRZ GT300 racing team has just completed its first official test for the SUPER GT series and they are ready to go on April 5 for the qualifying. They plan on winning it all. Stay tuned to Torque News for the latest Subaru SUPER GT racing news.