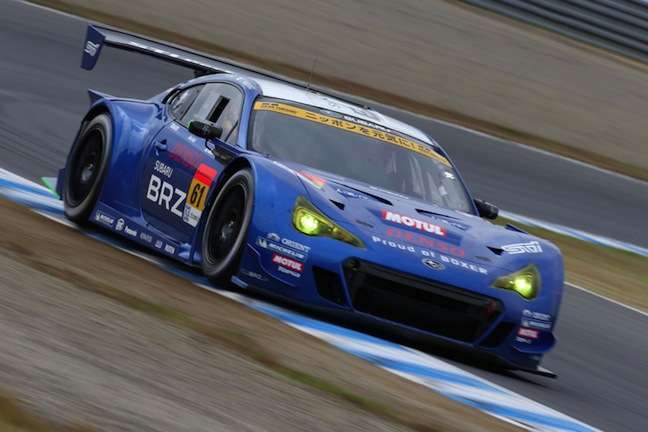 Subaru BRZ GT300 ends the season on the podium

The 2013 Subaru BRZ GT300 just competed in the 2013 season of the SUPER GT series with a podium finish. They finished fourth overall.
Advertisement

In this final Super GT race, competitors were allowed to shed accumulated handicap weight and compete with their cars in their original state in accordance with the special rules for the season finale. The BRZ GT300 took the pole position in qualifying and the Subaru team had high expectations for the final race.

The morale of the R&D Sport team was super high, hoping for a top position finish for Tetsuya Yamano who will get an honorable retirement at the end of the season. They knew they had the fastest car, but couldn’t hold the lead on the straights. General Team Manager Hideharu Tatsumi says “It's clear that we can prove our speed in qualifying, but in races we tend to fall behind others on straights.”

The BRZ GT300 slipped down to 3rd while Yamano was trying to save tires. The team seems to have had an issue with the new Michelin tires all season. Sasaki edged closer to the front car every lap and reduced the gap to about 1 second before the final lap. However, just before the finish line, he seemed to push too hard and spun off the track. With the car behind in 4th breathing down his neck, he managed to recover and maintained 3rd position to complete the race.

General Team Manager Tatsumi commented after the race,“We've decided to give it everything we have regardless of the circuits this year, and for that, we missed some points that we should've made sure to get. We've learned that we should never miss the chance to get points if we want to fight for the championship." With the season finished, the R&D Sport team and the 2013 Subaru BRZ GT300 race car will head back to the shop to see how to improve the performance for next year. The car was faster this year and with the 4th place finish, the team is making progress.

The 2013 BRZ GT300 uses the same front-engine, rear-wheel-drive layout as the production 2014 Subaru BRZ model that makes every day a track day. The R&D sport team will use what they learned and transfer the technology to the new production BRZ in the future.