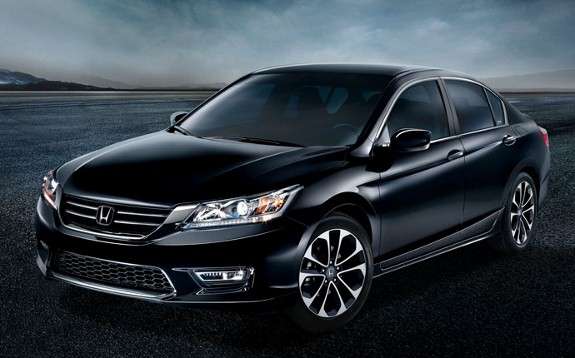 Honda ‘standard features’ value takes Accord to #1 in North America

Honda’s practice of including exceptional mechanical engineering,technology and safety features “standard” across the line, is paying off for the original Japanese owned auto manufacturer to build cars in North America.
Advertisement

The Accord or Acura TL you drive was most likely manufactured in Marysville, Ohio.

For most of our readers, the Honda brand is as American as Chevrolet. Many, including myself have witnessed three generations of family members and friends driving Honda cars and motorcycles. As announced Friday by American Honda Motors, the “Made in America” Accord was #1 in its sector with Civic, CR-V and the Odyssey minivan dominating the light vehicle sector.

While our Tuner fans contemplate the timely arrival of a Civic Type-R hatch, the bread and butter of the Honda line comes in the form of an affordable 4 door, 5 passenger sedan.

As North America recovers from the worst economic recession experienced in decades, Honda has come out the consistent winner by providing a quality, features packed product at an affordable price-point.

We’ve touched on Honda’s humble Los Angeles begins and have expounded on many Honda firsts.

Honda was the first Japan based motor company to manufacture cars, light trucks and motorcycles in North America. The first engine manufacturer to meet or exceed stringent air quality control standards( without catalytic converter) through the advent of the CVCC engine; Honda's first water cooled engine. The list is seemingly endless.

It's an interesting story that continues to evolve with the advent of a viable hydrogen cell, electric hybrid running the roads of California. An affordable, although very limited production Civic and Fit E.V. and arguably the most fuel efficient midsize hybrid sedan on the road today.

Looking to the base Accord LX sporting a msrp of $21955, we find an affordable entry level sedan offering many of the standard features found on the top-of-the-line Accord Touring.

We've written much as to the quality fit, finish, performance and standard features offered in the 2014 Accord. Also, the Accord Hybrid is the most affordable and fuel efficient midsize sedan on the market today.

Honda has taken a no nonsense approach to model upgrades. You will not find the “build-and-add” pricing platform utilized by former #1 Toyota.

We believe that while both manufacturers may produce comparable products as demonstrated by the Camry, Honda’s approach to product specification, market transparency and cross-generational appeal has driven the maker to #1 in North America.

looking to 2014: With Honda’s Saturday announcement of the successful( on-schedule) opening of the Celaya, Guanajuato, Mexico “Fit” and Vezel crossover facility, we expect Honda to further dominate the North America market through the introduction of a greatly improved 2015 Fit and new Vezel.

Reader response to the soon to arrive Vezel has been very positive as they look forward to the return of a small, sporty SUV to North America. A viable replacement for the up-sized Honda CR-V and the no longer available Suzuki XL-7, the introduction of the Vezel with carry forward Honda’s principle of “ holding a global viewpoint,” as we approach Q2 2014.