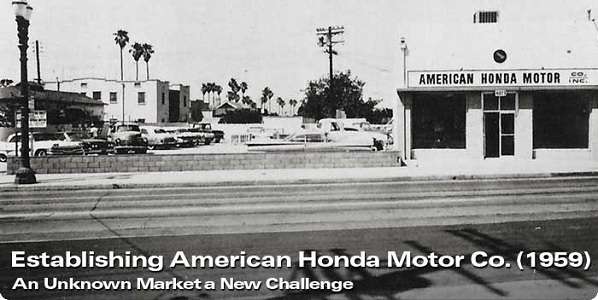 The year was1959, and World War Two “baby boomers” were coming of age. With them came a quest for the “ good life.” In a world of Harley Davidson Sportsters, Triumph and Norton, the Honda 50 Dream, Benley, and Honda’s boulevard cruiser of the day, the 302cc Dream, would soon catch the attention of American entry rider’s that didn’t wish to spend the big bucks on domestic and European import motorcycles costing two to three times that of the “Dream.”
Advertisement

Soon, the fledgling ” American Honda Motor Company” of Los Angeles, with 6 key employees, would expand its initial offering of three affordable 4 stroke single and twin cylinder motorcycles, featuring “manufactured in Japan” reliability into power yard equipment and small portable power generators. The product line was reliable, affordable and dependable.
Within 20 years Honda would be manufacturing and assembling products in the United States for North and South American markets.

Honda of Japan’s Los Angeles, California store front was the first subsidiary of Honda Motor company, LTD. The story that is Honda found its greatest success in the U.S., where much of its product design, R&D and manufacturing remains today. The Honda Civic, Accord, Acura concept, Odyssey minivan or Goldwing sitting in your garage today was most likely manufactured in the U.S. utilizing North American, Japanese parts and lean manufacturing principles.

Back to the future: As a Teen of the late 60s and 70s, I was one of the fortunate few that actually bought and rode a 64’ CL 77 Honda Scrambler 250. I believe the year was 71, and Honda, although relatively new to the United States, was quickly putting British forerunner, B.S.A., Triumph and Norton out of business. A modified 305 c.c. version of the bike would win the Baja 500 a few years later.
The British Motorcycle of the day was a bit temperamental. The Lucas electrical system was never reliable, resulting in dead batteries, fouled spark plugs and fried diodes. As to compression “ kick back” I posses a knee that reminds me of the “ quick drop” dead center on my B.S.A. lightening of the day. Riders put up with them because they handled relatively well, looked and sounded cool. But, the Honda was affordable, lightweight, reliable, quick and trouble free.

Earlier, as a 12 year old growing up in the suburbs of Long Beach, Ca, I found myself fascinated with the molded lines of the Honda Dream. There was nothing else like it on the road. It came back to that affordability, reliability thing. For me, that “ different” renegade aspect of looking past the prejudice many American’s held for anything manufactured in Japan was appealing. And it worked… The bike was heavy as hell, a little odd looking and chunky by British standards, but easily started with the push of a button.

Well, I’ve owned a handful of Hondas since then( 12 or so). And, although I jumped ship and started riding B.M.W.,Triumph and Harley Davidson to the present day, I still hold a fondness for the 250cc open short pipe scrambler that earned me my first warning from a fellow rider ( traffic cop) in 1972.

With a smile on his face he assured me that he admired the way that I had handled the scrambler on a busy coast highway that fall day. He then informed me that the bike was so loud that he couldn’t hear the dispatch calls in his helmet headset. Asking me to put the baffles back in, he sent me on my way. I had tweaked a few ponies out of the scrambler by removing the exhaust baffles, factory filter and opting for a hotter spark plug.

I never looked back. I had payed $250.00 for the scrambler, striped and rattle can painted it, “semi chromed” the factory coating off of the forks, polished what I could, painted what I couldn’t. Looked good, road well. Kept it for a year and traded up to a new Yamaha 650 Twin 4 stroke. Another Triumph knock -off import killer. but, that’s a story for later.

A company of many firsts, Honda’s progressive “ lean manufacturing,” and leadership team management practices would propel the company to international recognition for quality, as well as automotive ( volume) dominance in the North American motorsports and automotive market place.