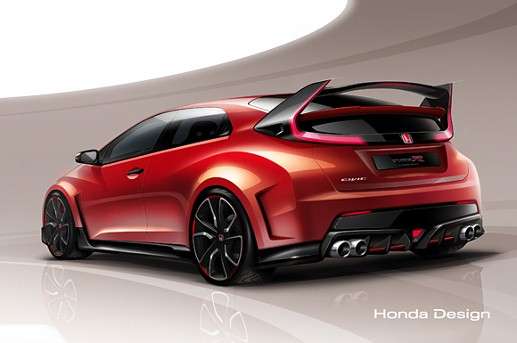 While we know that Type- R production was halted in 2010 due to emission standard constraints, Honda engineering tackled the problem with the development of a high compression turbocharged 2.0 liter. Europe will take delivery on the latest Civic Type-R, midyear 2014.
Advertisement

The “R” is for race and Honda engineering and development describes the Civic Type-R as a “ race car for the street.” Unfortunately for North America, Honda’s largest automotive market with 1.4 million cars and light trucks sold in 2013, will most likely never witness a dealership delivery of a 2015 Type-R.

Much has been written about the car since Honda Motor Company’s promise to return the much revered Civic Type-R to production. As reported by Torque News in November, the development of the “ Earth Dreams” 2.0 Liter turbocharged I.D. VTEC 4 cylinder engine has paved the way to the presentation of a Civic Type-R Concept at the 2014 Geneva Auto Show.

We find it interesting that Honda has released a new conceptual drawing for a vehicle that’s been viewed testing in time trials. While the drawing pictured at the top of this article is not identical to the flat black “Earth Dreams” Type-R lapping Nurburgring, they’re very similar. None the less we like the concept drawing.

Back in November 2013, we predicted that the turbocharged and inter-cooled, variable timed, cylinder controlled 2 liter would be the performance force to reckoned with in 2015. This is also the year that we predict that the engine will show up in North American production models.

As to the possible release date of a North American Civic Type-R, pure speculation.

Outside of the world of independent metric “tuners” the hottest cars that American Honda Motors offer is the Civic Si Sedan or Coupe and the CR Z Sport Hybrid. Yes, you can add body, suspension components and upgrades via Honda Race Development and HPD, but you won’t reach the performance and handling characteristics of the European specification Civic Type-R. You won’t have 19 inch Brembo brakes and pending world record lap time performance.

Claiming 280 + bhp and weighing in at a mere 2700 lbs fully fueled, Honda has designed a giant killer ready to compete in a very crowded European and Asian sports and performance car sector. Early estimates of the retail cost of this Porsche and Corvette killer approaches $40,000 U.S.. This would put the car in direct competition with Acura,BMW, Nissan and the Subaru WRX.

We, like others, will keep a close eye on the Type R with fingers crossed. Hopefully 2016 will find a Civic Type-R available for serious driving enthusiasts in North America.

Parks McCants wrote on February 13, 2014 - 4:06pm Permalink
While Honda is big on 'Concept Car' promotion, according to the maker this concept will be very close to the European model Civic Type-R to be released mid-year 2014. I'd like to see Honda market this giant killer in North America.
Clyde Sharman wrote on June 12, 2014 - 5:38pm Permalink
40,000 bucks for a turbo charged car? It's not all wheel drive I can get a ford focus st for 24,000 274 hp with recaro seats. Honda civics have always been my favorite but with noisy interiors lack luster performance. For 40,000 I will buy a all wheel drive Subaru sti that would smoke any heavily modified civic si. The 2.4l flat four can easily support 500whp without rebuilding any internal engine components. Upgrade the turbo and tune it for 1800 bucks and with the power to weight ratio it's a nissan GTR nightmare cost vs performance. Honda is falling off the wagon with their cars. 40,000 for a civic no way I would rather have the Subaru STI. There is a performance value that honda can't match.
Little john wrote on June 12, 2014 - 9:45pm Permalink
Well said! 40K for a civic? One gotta be stupid, period.
Xue vue wrote on October 4, 2014 - 3:37am Permalink
The r is running about thirty not 40. Plus it's r&d for race, world record lap time. Not like the civic si just made with some rims and call it good. I don't think so. The r is always design with track tested that's why Honda is known for some of its best handing in the world. Trust me it'll rip the focus and sti in half off the production floor, Im not even talking the American 1/4 mile. No Gina a circuit track race. World record lap around the focus and sti baby woooo!
Kyle wrote on July 7, 2014 - 11:38am Permalink
Hi Clyde, I work at a Subaru dealership, and I can tell you that you will not even touch a brand new STI for $40,000. I have owned both Subaru and Honda and can speak from experience that once we put the K24A2 in the 08 Civic Si and turbocharged it for around 4800.00 only running 8 lbs of boost on stock internals smokes an STI and your daily driven V8's muscle cars with no problem at all. I will not even stoop to the Ford Focus ST, that is not even worthy to talk about, just like the HY-UN-DAI Genesis Turbo, go waste your money. Your 2.4l Subaru engine would cost you around the same $4800-15,000 depending on the upgrades required to work on the STI to get to your 500whp. They are not as cheap and easy to work on as most think, Hondas are far more cheaper to work on for sure because of the quantity of them around. Again this is all from experience, not trying to ruin your dreams but just some insight before you purchase an STI for around 45-55K depending on options, and get your hopes all up when you jump off the line in the STI and think you have won, unless your racing 60 foot times...lol Good Luck bud! Honda knows what they are doing for sure, its the Americans that cant drive cars that fast and kill everyone around them, but the car gets blamed of course. . lol KO
Fujita wrote on July 18, 2014 - 1:50pm Permalink
I have a 2006 STi and a 2012 Evo, neither of these cars cost me more than $37K brand new. Firstly, more than 200hp in a front wheel drive car is a complete waste in my opinion. If you like driving straight, or like the feeling of torque steer and understeer in corners, by all means go ahead. But 200hp is more than enough for a front wheel drive car. Other cars that could be bought for $40k, Focus ST, Mazdaspeed3, WRX, WRX STi, EVO X, Mustang GT, etc. Now , unless honda decides to put an AWD system(SH-AWD with electric motors) on their new civic then I would call the $40k price tag reasonable.
Jennifer wrote on December 16, 2014 - 10:38am Permalink
One day i will have a car like that
Parks McCants wrote on December 16, 2014 - 2:36pm Permalink
Welcome Jennifer. I like your positive aspirations. I believe you will own a car like the Type R someday. Best of luck to you and may that day come soon.
ron wrote on May 15, 2015 - 11:22pm Permalink
not sure why honda is shafting the united states...even the motorcycles..they have speed limiters on one i want to buy, 110mph....why all the restrictions....no sale