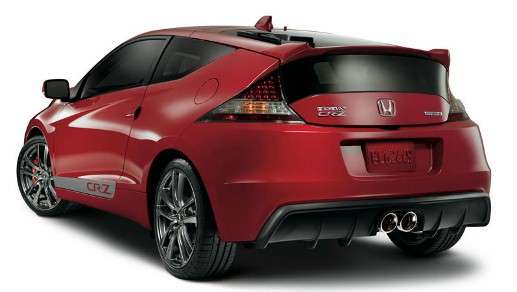 This two seat, tech laden pocket rocket takes the age old concept of sports driving fun and puts a green spin on it. The 2014 Honda CR-Z sports hybrid coupe has taken supercharged gasoline injected piston power and combined it with the superior torque of an electric motor to produce a pocket coupe that will blow the doors off of the competition.
Advertisement

One Honda that turned a few heads at the 2013 Las Vegas SEMA Show was the race-ready 2014 HRD CR-Z sports hybrid coupe. I decided that this car, available in the spring of 2014 deserves a second look here at Torque News.

For me it’s a blast from the past, and with all of the media attention targeting Honda’s FCEV concept, 2014 Civic Si coupe and Accord hybrid coupe, the quirky yet automotive cult status CR-Z has been left out of the limelight.

I’ve always liked the looks and driving characteristics of the CR-Z. For me, a kart racer as a kid, the logical next step as a teenager was the CR-Z. They looked space-age and fast. At that time, this 6’ 4’’ teen couldn't fit in one. That didn't stop me. If I could drive a 1 liter Fiat Abarth, I could drive the CR-Z. So, I purchased one and commuted with my knees on the dash and shifter for a couple of years.

First introduced to the U.S. in 1983, the then Japanese manufactured 2 seater, quickly gained a following in the Americas. Although the original CR-Z only produced 135 hp., the hatchback’s low center of gravity, lightweight (1680 lbs) slot car traction characteristics and extremely high gas economy, put it on the track to automotive cult status.

However, due to the cars extensive taillight and rear glass deck hatchback design, the car was blacklisted by the automotive insurance industry and rated as “too expensive” to repair in a rear end collision. This resulted in thousands of CR-Z’s being totaled by the insurance companies and removed from U.S. roadways. In the interim, the car would be redesigned with a trunk and removable “ T” top and renamed the del Sole. That was in 1991.

Back to the future…

Claiming a combined gas, electric power output of 198 hp. @ 6300 rpm and a torque rating of 155 ft-lbs in the mid-range, this two up street fighter will prove hard to beat in the under 3,000 lb street racing class. There’s nothing else on the road that looks like the CR-Z, and few cars off the dealer’s lot will handle like one. Oh, and did I mention a claimed average mpg of 39 ? Perhaps that will convince the girlfriend,wife or significant other that you don’t need that back seat or trunk space.

What’s this supercharged 1.5 liter 16 valve going to set you back? Are you sitting down? Well I imagine by the time you add the HRD option package to the CR-Z EX you’ll be approaching $25,000 or more. But, you won’t be passing many of them on the road. Production will be limited.

And, you can grab a helmet and go auto-crossing the day after you take delivery from Honda.

Think Fiat Abarth 500 on steroids. A Mini Cooper S on MGH. Or a Mazda 3 coupe in race trim. Oh, that’s right, Mazda doesn't manufacture a 3 door hatchback. And that’s what makes this car truly unique. It’s a one of a kind...

Parks McCants wrote on November 27, 2013 - 1:08am Permalink
Love the concept of a race -ready hybrid. Do you think the public is ready for it? How about the estimated 39 mpg? Seems optimistic for a car that develops close to 200 hp...