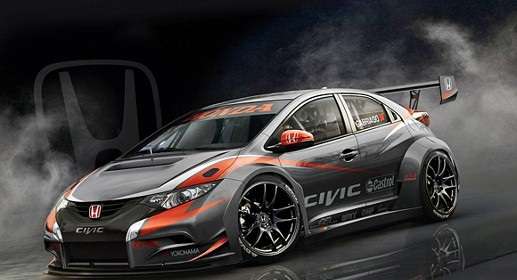 While we have but a sneak peek at this years 2014 Honda Performance Development's WTCC Civic, it’s enough to push the viewers imagination into overdrive. The car is absolutely stunning.
Advertisement

O.K., I must admit that as a former SCCA vintage race class driver, I’m attracted to race breed automotive technology.

Once you've stepped down into a cage, fastened a racing harness and donned a brain bucket, you’re hooked for life. Flipping the fuel pump toggle to the up position, counting to 3 and pressing the starter button, the loud pedal comes to life and the car rocks and vibrates in possible anticipation of the race to come. And then you, the driver slips into that quiet place of anticipatory concentration and mental clarity that returns to most of us only on the track.

That’s what I think of when I look at the 2014 Civic Si. Take the 9th generation Civic to extremes and you have the HRD 2014 World Touring Championship Challenger Civic. Stripped to the bare basics, the power to weight ratio of the car combined with a track hardened winning record, the 2014 HPD prepared Civic will be tough to beat. Plus, this thing looks like fun to me.

Honda isn’t willing to release the specifications this early in the game. The car won’t hit the track until the spring, and only a few will ever be manufactured. This Civic will be the most limited production car in Honda’s stable.

To date, only JAS Motorsports, Zengo Motorsports and Proteam Racing has a firm commitment from Honda for this rare racing Civic.

As to specification, here’s what I do know. The WTCC tour is raced primarily in Europe and Asia with race #9 is held on my old neighborhood track in Sonoma, Ca. Drop down there in September if you can, it’s a blast. Due to class racing specification consttraints, the Civic WTCC will not sport the European T.C. Si motor. Instead you will find under the hood a 1.6 Liter 4 cylinder direct injection turbocharged HR 412.

I do know that a pumped up Civic Si motor can approach 260 hp. What this factory tuner offers is anybody’s guess but the inner sanctum at Honda Performance Development.

With a claimed sprint speed of 0-60 mph in 5.5 seconds and an estimated top speed of 186 mph,( damn fast) Honda will remain highly competitive in the WTCC.

Will the motor ever find itself installed as standard equipment in a future Accord or Civic? Dalsuke Horiuchi thinks so.

Parks McCants wrote on December 4, 2013 - 12:27am Permalink
Taking the Honda Si to extremes? Well, certainly a handful of design cue and specifications may drift into future production cars. But in the mean time, dream on...