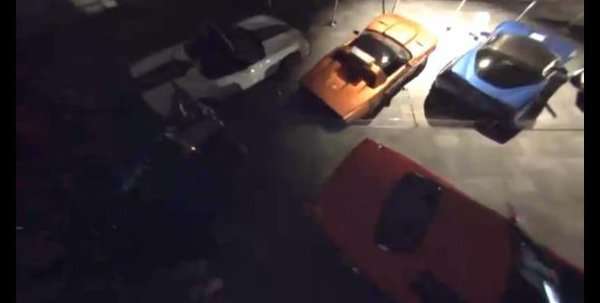 A little over 24 hours have passed since a massive sinkhole under the National Corvette Museum in Bowling Green Kentucky swallowed up 8 rare, historic Corvettes and we now have more information including videos that show us how it all went down – along with a look at the rubble in the hole afterwards.
Advertisement

The odds are good that if you are reading this, you know that early on the morning of Wednesday February 12th, a sinkhole under the Skydome of the National Corvette Museum in Kentucky caused the floor to collapse under 8 rare and historic Chevrolet Corvettes. At first, there were no images or videos available and with only a limited amount of information on the damage to the facility, it was tough to speculate as to just how bad things were for those 8 Corvettes.

The National Corvette Museum management has been good enough to offer up as much information as possible including a handful of videos that show the final seconds for those cars and a look at the inside of the hole from a small helicopter when it was all said and done.

First, some information about the sinkhole that swallowed up those 8 historic Corvettes. Reports indicate that the hole under the floor of the National Corvette Museum was about 30 feet deep and roughly 40 feet wide. Some of you have asked why this kind of thing isn’t checked for and it is – but the ground would have been checked prior to the structure being built some 20 years ago and, unfortunately, a sinkhole of this size could have opened up gradually over the past two decades.

There is also the possibility that when the ground was inspected ahead of construction, the normal process could have simply missed the huge hole. Some information that I have read about sinkholes and about the inspection process reveals that there are a variety of factors that can cause an inspection to miss a sinkhole…even one of this size.

The next order of business is to discuss those 8 Corvettes swallowed up by the sinkhole yesterday morning. The National Corvette Museum surveillance system captured 49 seconds of footage from a camera that was directly over the sinkhole. When the 49 second video begins, we can clearly see 4 Corvettes – the 2009 1.5 millionth Corvette (white car, dark stripe, left side of the video), the 1984 PPG Pace Car (metallic orange car, middle), the 2009 Corvette ZR1 Blue Devil (blue car, right side of video) and what I believe to be the 2001 Mallett Hammer Z06 Corvette (red car, bottom of video). As soon as the video begins, we can see all of the cars in the frame shift a little; and then a little more. A smaller hole opens up under the back end of the 1984 PPG Pace Car and the 1.5 millionth Corvette and then around the 37 second mark of the video – the floor totally collapses below these two Corvettes. At this point, we can also see the floor below the Blue Devil begin to give way before the video comes to an end.

During this first video, there is a shadowy area in the bottom video of the frame in which we can see the shadows and lighting change a bit here and there so it is unclear what was going on with that part of the display. When you watch the video below showing a small helicopter inspecting the inside of the sinkhole, you can see that the Blue Devil ZR1 ended up on top of the pile of rubble so you would think that it was one of the final cars to fall through the floor. That leads me to believe that the shadowy area may have contained the 1992 1 Millionth Corvette, the 1993 ZR-1 Spyder and the 1993 ruby red 40th Anniversary Corvette.

The aftermath video (shown below) clearly displays the 1962 Corvette which appears to have minimal damage relative to some of the others, the 2009 ZR1 Blue Devil which appears to be sitting on top of an upside down car and the 1993 ruby red 40th Anniversary Corvette which is sadly upside down. We can also see the wheel and corner of a black Corvette that I am guessing might be the 1993 ZR-1 Spyder. As the camera helicopter flies back out of the hole, we can see a white Corvette deeper in the hole under the 1962 Corvette and I believe that white Corvette to be #1,000,000.

We cannot see the 1984 PPG pace car, the 2009 1.5 millionth Corvette or the Mallett Hammer Z06 Corvette in the aftermath video which leads me to believe that they are all buried under the pile of wreckage and dirt. Considering that the 1984 and 2009 Corvettes appeared to be the first to plunge through the floor in the first video, I would have to imagine that they are the furthest down the 30 foot deep hole with thousands of pounds of dirt and 5 other cars piled on top of them.

Based on what we can see in this second video of the National Corvette Museum collapse, it looks as though the 1962 Corvette, the 2009 ZR1 Blue Devil and the Ruby Red 40th Anniversary Corvette might all be salvageable. As for the rest of the cars that have been buried, they should all be recovered, but it is unclear whether the museum will be able to repair them…although modern auto body repair tech has come far enough that pretty much anything is repairable with enough time and money.

One bit of good news is that the sole 1983 Chevrolet Corvette in existence – which was parked near the 8 cars that fell through the floor – was saved right away. There were approximately 70 cars in the Skydome, but safety officials could not allow museum personnel to remove the other vehicles until the building had been inspected. However, the staff was permitted to move the 1983 Corvette out before the safety folks sent everyone out for inspections. Since then, all, but one of the Corvettes have been removed from that area and crews are working on extracting the final Corvette.

The National Corvette Museum is open today, but the Skydome wing will be closed indefinitely.

green_eyedgirly wrote on February 13, 2014 - 2:49pm Permalink
The other security video gives a better angle on the '62 and the ZR1s. I can't tell if the white car on the end is the Millionth, but I'm guessing so.