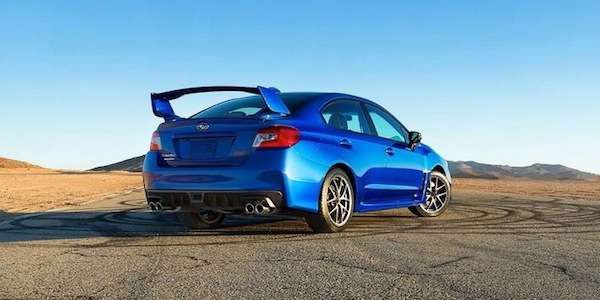 David Higgins and Travis Pastrana will be driving the all-new 2015 Subaru WRX STI car before the end of the 2014 Rally America Championship season.
Advertisement

Get ready for an advanced 2015 Subaru WRX STI Rally car to debut, as it’s getting ready now for drivers Higgins and Pastrana. We were hoping we would get to see the 2015 WRX STI rally car, and it’s going to happen before the end of the Rally America Championship season. Vermont SportsCar, the team who is building the new car, are deep into the process of getting the new performance car ready for action. What can we expect from the new 2015 WRX STI car?

2015 WRX STI will get upgrades

The 2013 WRX STI Rally car was super successful last season and Higgins won the championship last year driving the car. The all-new 2014 model started the season with a win at Sno* Drift Rally 2014 in Michigan. Vermont SportsCar tells us the 2015 WRX STI will get upgrades to the chassis and the handling will be improved over the 2014 race car.

Both Rally America Championship and Global RallyCross are highly competitive, and the Subaru teams will need the new car to compete. It will be a battle with the Subaru drivers taking on top competitors Ken Block from Hoonigan Racing driving his Ford Fiesta ST and Rockstar Energy Drink Rally Team's Antoine L'Estage, of which all are viable top podium finishers. Antoine L'Estage will be a fierce competitor driving the Mitsubishi Lancer EVO X for 2014.

Lance Smith, Team Principal at Vermont SportsCar, says plans are to debut the all-new Subaru WRX STI later in the year. He says, “We’ve had the new 2015 Subaru STI in our shop for some time now, and are deep into the development process on this new car. Our engineering team is extremely impressed with the advancement in chassis and handling performance. Both our Rally and Rallycross cars will take a big evolutionary step in performance with this new design.”

Pastrana returns to action in the Rally America Championship at the Rally in the 100 Acre Wood in Salem, Missouri on February 21-22 with veteran co-driver Chrissie Beavis. He will need to adjust to the speed of the new Subaru WRX STI Rally car since his absence from the sport. It’s the same car defending Champion David Higgins will be driving, so it will be “the best of the best.”

Pastrana knows it won’t be easy keeping up with the leaders. “It will take some time adjusting to my new co-driver, Chrissie Beavis, and for her to adjust to me. The new speeds of these Subarus will mean that I will have to do more then knock the rust off.” said Pastrana in an interview with Rally America.

The all-new 2015 Subaru WRX STI Rally car will be faster, with a more advanced chassis and handling performance, and is being prepared now. It will be ready for race action before the end of the 2014 Rally America Championship season. Stay tuned to Torque News for the latest 2015 WRX STI news.