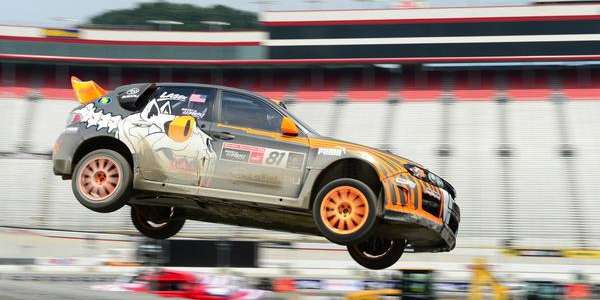 Subaru has confirmed their return to the Global RallyCross Championship (GRC) for the 2014 season. They improve both drivers and the 2014 Subaru WRX STI cars.
Advertisement

Former three-time European RallyCross Champion and 2013 X Games Rallycross Medalist Sverre Isachsen will return to the team, along with Bucky Lasek, who began professionally racing with Subaru in 2012. Joining the team at the X Games Austin round of the GRC, will be Travis Pastrana who had been driving the Dodge Dart last year.

Rallycross, is relatively new for the team who had been involved in Rally racing for many years before. Competing against established rallycross teams from Europe, the learning curve for Lasek, Dave Mirra, Isachsen, and the team had been steep. There were new venues, new race format, new rules and new cars to build that were very different from their Rally cars. They have been catching up in the extreme form of racing. They have been going through some growing pains as they compete in the relatively new sport here in the U.S.

Travis Pastrana brings a new excitement to the team this season. While he only finished a disappointing 10th overall last season, he brings more experience to the Subaru team. Travis has competed in Global RallyCross with his own team the past two years in his #199 Dodge Dart. He earned a victory at New Hampshire Motor Speedway in July 2012, made the main event in all five of his 2013 starts, and closed his program with a podium finish in Las Vegas last November.

Bucky Lasek was awarded the prestigious GRC Sportsman of the Year last season; which is voted on by fellow GRC competitors. “I’m really looking forward to getting behind the wheel of my Subaru again, as well as working with such a devoted team,” explained Lasek. “We gained momentum last season as we developed the STI for Rallycross; and 2014 looks to be a defining year for us!”

Global RallyCross is growing quickly and is one of the most exciting motorsports on the planet. It’s a great venue for Subaru to get even more exposure for their performance WRX and WRX STI production cars. “The sport of Rallycross continues to gain interest in the USA” stated Rob Weir, Motorsports Marketing Manager. “We’re seeing GRC’s proposed TV coverage and fan experience at events this season as a win-win. The turbocharged, all-wheel drive powertrain of a Rallycross car is extremely similar to a production Subaru WRX STI; so the sport, along with rallying, is the ideal platform to display the performance abilities of Subaru Symmetrical All-Wheel Drive.”

The Subaru PUMA RallyCross team will field new 2014 Subaru WRX STI Rallycross cars prepared by technical partner Vermont SportsCar. The Subaru GRC team will start their season in the 2014 WRX STI that features a 600 horsepower, turbocharged Boxer engine. And of course it will transfer all that power to all four wheels via Subaru’s Symmetrical all-wheel-drive.

Can Subaru make significant progress this year with new 2014 Subaru WRX STI PUMA RallyCross cars and the addition of Travis Pastrana? Can they compete with Ford and the new VARX VW team? Stay tuned to Torque News for the latest Subaru PUMA RallyCross racing news. It will be an exciting season, guaranteed!