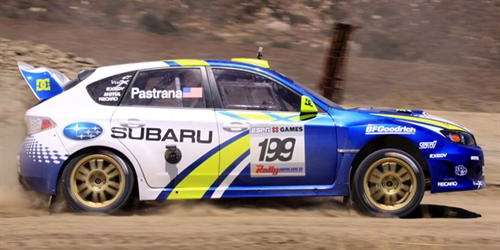 Travis Pastrana will be driving a 2014 Subaru WRX STI this year for the Subaru Team at the Global RallyCross round at X Games Austin this June.
Advertisement

Subaru is very happy to have Pastrana back with the Global RallyCross team. Pastrana first joined Subaru in 2004, and went on to win two of the first three X Games gold medals in Rally Car Racing in 2006 and 2008. He also took 15 Rally America overall victories on the way to four consecutive series championships between 2006 and 2009. His last race in a Subaru WRX STI came in July 2011, when he raced in the Global RallyCross season finale with a specially-modified car. Pastrana had a broken leg he had suffered just days before the race.

Subaru will have a very good driver in Pastrana now as he competes for a Global RallyCross Championship. Travis has competed in Global RallyCross with his own team the past two years in his #199 Dodge Dart. He earned a victory at New Hampshire Motor Speedway in July 2012, made the main event in all five of his 2013 starts, and closed his program with a podium finish in Las Vegas last November.

The Subaru RallyCross Team WRX STIs are prepared and managed by Vermont SportsCar, who also manages Subaru of America’s Rally America Championship cars. Pastrana will also be driving for that team and will be driving a newly prepared 2014 WRX STI for the second race in February. Subaru pulls of a major victory in getting Pastrana back on both of these teams.

Vermont SportsCar has competed for the past two seasons under the Subaru PUMA Rallycross Team banner, with drivers Sverre Isachsen, Bucky Lasek, Dave Mirra, and David Higgins. Many have felt the driving team was the weak point and needed to be upgraded with better drivers. Pastrana will bring a new attitude and more experience to the Subaru RallyCross team.

Sverre Isachsen has done an admirable job and has earned three podium finishes for the team, including a bronze medal at the final X Games Los Angeles last August. The team led Subaru to second place in the Global Rallycross Manufacturer’s Championship in 2013. With the addition of Travis Pastrana driving a 2014 Subaru WRX STI, Subaru’s chances at a championship just went way up.

Patrick Rall wrote on January 15, 2014 - 9:38am Permalink
They can have him. After he put no effort into the 2013 GRC season and put all of his time into his failing NASCAR ride - no one in the Dodge camp is going to miss him. Also, considering how uncompetitive the Subaru teams have been these past two years, he will fit in just fine. Oh..and Ford rules. :)